The end of the year is approaching fast and I need to get some things wrapped up so I can start the new year with a clean slate.  One of those loose ends is the recollection on the last run of the 2018 race season.  This race season was a new record for me as I completed 7 1/2 marathons this year thanks in part to adding 3 very tough trail runs into my schedule.  The first ever was the Blue Chevy Classic where I took 2nd in my age group (link here), then the Cry Me a River race where I placed in my age group (although they only rewarded the first 3 males and females overall – link here) and then the Sandhill Crane Half Linda found for me while we were looking for another 13.1 Wine race.

This one ended up being in Vandalia, Michigan back on the 13th of October.  The element that caught Linda’s eye was the fact it was named for birds that were commonly seen at the park they were holding the race.  That was pretty much a no-brainer in itself, but the fact this race only cost $27 was another.  That was such a good price ended up giving them a $5  donation.  Figured at that price, there wouldn’t be that much in the way of shirts or medals.  Wrong on both counts.  They recognized individual male and female divisions and the shirt ended up being a very nice long sleeve tech shirt.  More on the awards later.

Hit the jump to see how the trail race turned out!

Unfortunately, the weather wasn’t exactly cooperating the day before the race.  We drove up the day before and had made arrangements with the race directory and park district to stay overnight in their parking lot.  We were told it was well lit, it only required a small $10-20 dollar donation to the park and others would likely be doing the same.  The weather turned cold that day and as bad luck would have it, it started pouring when we got there.  After driving around trying to confirm we were in the right location, we found a place to park we figured was out of the way of the race setup (there was no indication anywhere that a race was going to be held there the next morning).   Beyond a single streetlight, that place was completely dark.  Tired from the drive, we settled in and set our clocks for the 9:00am start time (seemed like a late start but we appreciated the extra sleep time).  The rain fell the entire night – not good for a trail race.

Linda got up around 6:30am and noticed there was NOBODY there – now we were panicking we were in the wrong spot.  Figured we would give them another hour before going on the hunt.  At 7:30am still there was NOBODY there and of course, we did not have any cell phone coverage so no way to validate.  At 7:45 a car drove in and parked a few spaces away.  Hmmm, maybe this is just a laid back race.  Slowly other people started trickling in … wearing running gear … so the worry dissipated.  I found a place to pick up my race packet, Linda found out who to pay for the overnight stay and went about figuring out what to wear for the very cold (35F at race start) and correctly assumed muddy course.

To say this race is laid back is an understatement.  They eventually told us to gather at the starting area where we proceeded to line up toward the timer and starting mats – upon which they informed us we were facing the wrong way and had us turn around and put our backs to the mats.  I couldn’t even tell who was really in my 1/2 race since everyone was just kinda milling around the start – some 10K’s and some 5K’s which were scheduled to launch in about 30 minutes.  Something to be said for being absolutely unstressed for the start – now that is my kind of race.

I wasn’t exactly sure of the course layout.  They provided a map, but it was extremely confusing as it came back near the starting location 3 times – about a mile or two out, then again at the halfway point before it went a totally different direction finally finishing up at the start.  The first section back to the start was pretty much running a high cut grass field.  You couldn’t tell the dips in the ground due to the high cut of the grass and the thick green blades left your shoes pretty wet. You can sort of tell that in the shot below – the good news is Linda had additional chances to get pictures. 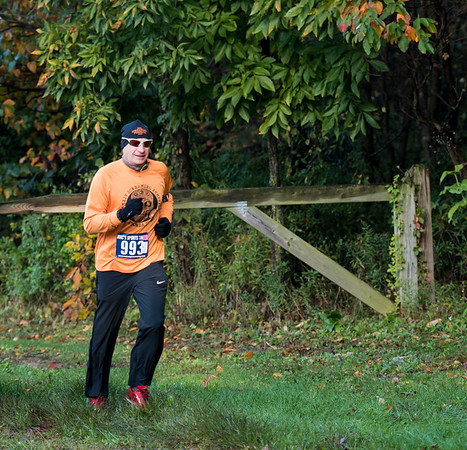 From there it went into a more typical trail course.  The first half was fairly rolling hills through forest and field without a lot of roots to contend with.  The prairie field was cut even higher than the grass on the first part completely hiding some major dips in the trail that seriously jolted my back.  Not to mention that area just kept going up and up as we circled the large field – there was a short out and back half way around that took you to some water.  You had to earn that water though as the foot bridge you had to cross was solid frost basically turning your run into a skate.  Other runners had warned me about the danger allowing me to dial it back and land squarely on top of my feet keeping me free of any falls.  From the out and back we continued along the field (yes, still uphill) until we came to a fire path that took us to the next section of the race.  It is on this dirt road I spotted a lady about a half mile away and slowly gaining on me as we traversed the flat.

The course was pretty well marked with white arrows pointing you in the right direction at intersections – could have used a few more confidence markers to keep me more comfortable – at about mile 3 two guys ended up going left where the guy in front of me went right.  He called out to them informing of their error, but they didn’t hear or didn’t care.  Figure it was at least .3 of a mile before we made it back to where they took the shortcut – they ended up winning first and second in their age group. If the third place dude was close to them in time he has a legitimate beef.  Eventually I made it back to the halfway point only to be redirected to a completely different portion of the park.  This is when I realized the first part was the easier part.  The second half was full of trail roots, stones and at some point the path was completely slanted as we traversed along the side of a hill.  More importantly, the trail was significantly steeper.  The lady had made up the gap by the halfway point and was putting distance on me on the flatter sections of the course.  The hills ended up being here Achilles heel.  On the downhills and flats, she would pass me and put some distance on me.  This was totally eaten away as I was keeping my steady pace up the hills passing her easily as she would slow significantly or started to walk.  On my third pass of her on a hill she sighed and exclaimed “You are a machine!”.  I laughed and appreciated the complement.  Turns out the trail was one hill too short.  I was ahead going into the final .4 of the race, but had to slow at a badly marked intersection.  In the few seconds it took me to figure out the right path she was on me again.  Kudos to her endurance on the flats as she ended up gapping me by .1 of a mile to the finish.  Not much I could do about it, fatigue was setting in and the lack of available fluids on the course was starting to punish me.  Here I am digging deep as I came out of the woods towards the finish (while wishing there was one more hill to go).

Then I saw Linda with her camera which always picks me up – never let them see how much pain you are in, especially the ones ahead of you – never! 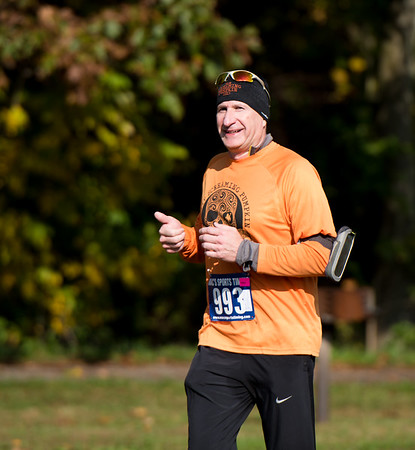 It ended up being a grueling race with no help from the weather gods that thought it would be funny to make the footing even more treacherous.  Mental note for next year, save some energy from the first half – gonna need it for the second half for sure.  After all was said and done, “the machine” made it a respectable race taking first in my age division by just under 3 minutes.  The second place guy was probably trying to figure out who would come all the way up from Brimfield for this race.. meanwhile the third place guy was probably wondering why the hell two people traveled so far to steal his medals.

Check this out, the first place in each age group received a nice wooden award.  Need to figure out how Linda keeps getting these shots of me where I look like a super thin stick legged guy an illusion for sure ha.

I accidentally gave it away in the first image, but here is the official first place in division award shot – Sung mentioned that the award looks like some guy was trying to attack a lady or at least scare her similar to what happened in my first trail.  I laughed and responded as to how accurate that image was seeing as how I was trying to catch up with that lady towards the end of the race. 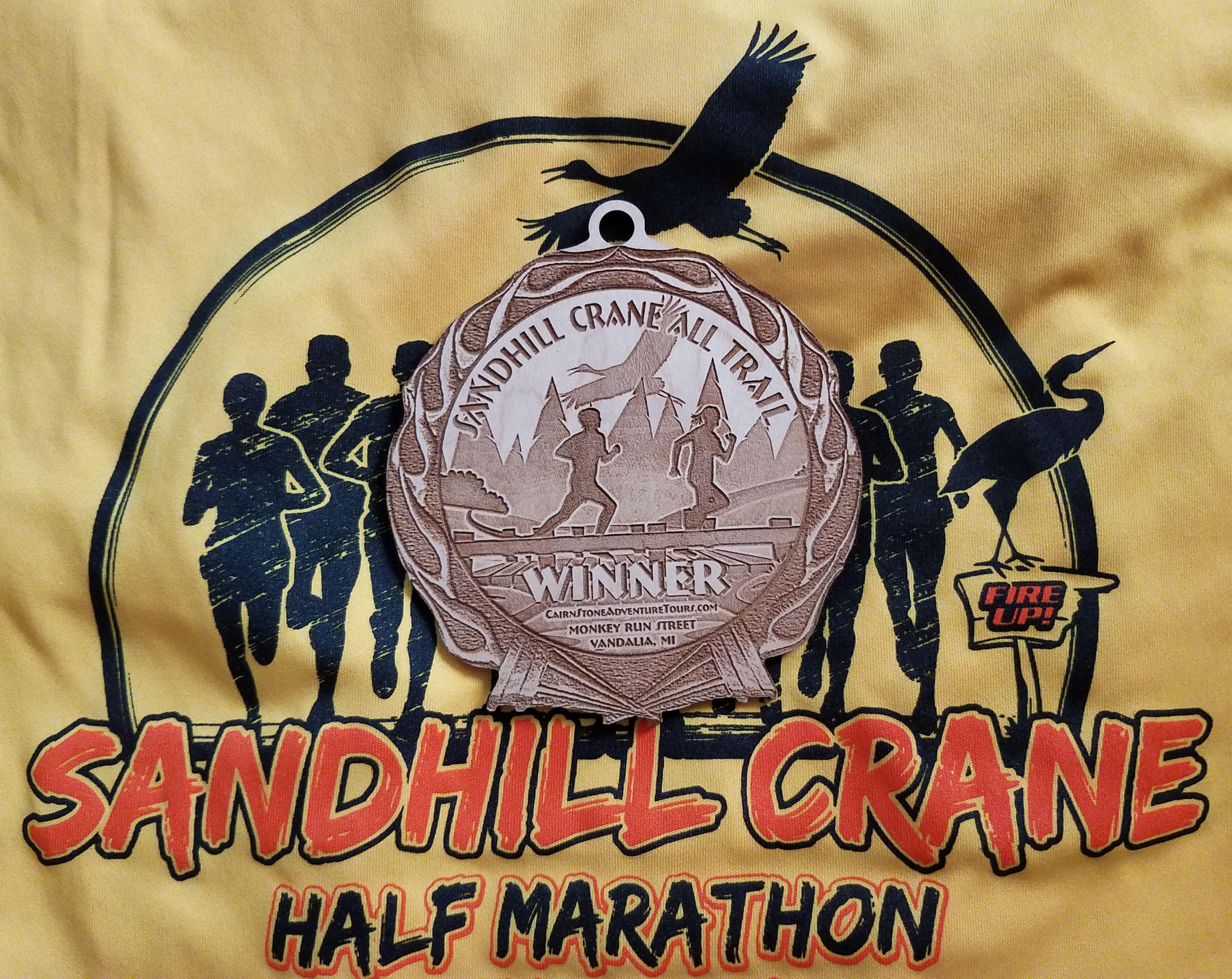 That’s a wrap on the post and the 2018 race season.  Although it took a lot of work this year to prepare for the trail running I had a lot of fun testing my mettle.  Already preparing for next year (had a nine mile run in the hills this morning with my friend Ryan) – no time to rest, this year my sights are set on a 50K (shhhh, don’t tell Linda).