The end of the year is approaching fast and I need to get some things wrapped up so I can start the new year with a clean slate.  One of those loose ends is the recollection on the last run of the 2018 race season.  This race season was a new record for me as I completed 7 1/2 marathons this year thanks in part to adding 3 very tough trail runs into my schedule.  The first ever was the Blue Chevy Classic where I took 2nd in my age group (link here), then the Cry Me a River race where I placed in my age group (although they only rewarded the first 3 males and females overall – link here) and then the Sandhill Crane Half Linda found for me while we were looking for another 13.1 Wine race. 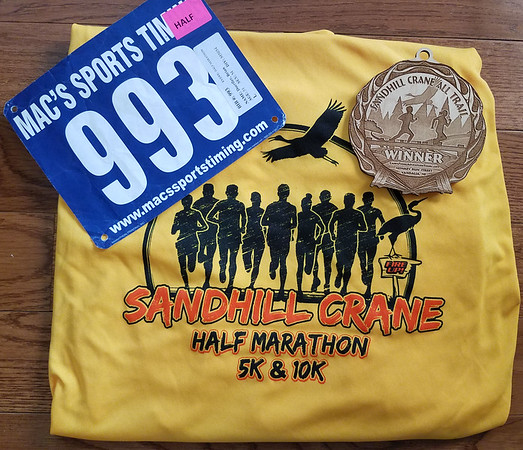 This one ended up being in Vandalia, Michigan back on the 13th of October.  The element that caught Linda’s eye was the fact it was named for birds that were commonly seen at the park they were holding the race.  That was pretty much a no-brainer in itself, but the fact this race only cost $27 was another.  That was such a good price ended up giving them a $5  donation.  Figured at that price, there wouldn’t be that much in the way of shirts or medals.  Wrong on both counts.  They recognized individual male and female divisions and the shirt ended up being a very nice long sleeve tech shirt.  More on the awards later.

Hit the jump to see how the trail race turned out!