We are on our way back from a short trip to Tunica Mississippi for some birding and gambling.  Birding absolutely sucked and gambling wasn’t that much better.  Tunica has gone way down since our last visit there over a decade ago.  There were at least 3 or 4 casinos completely closed down and the ones remaining are definitely on the decline.  We won’t be planning a return visit.  We hit the Wapanocca National Wildlife Refuge in hopes of getting another Bobcat or finding that Cougar we located last time, but missed getting a picture of – struck out on both counts and a lot of the refuge was closed for migration or hunting.  Luckily we had a fun time at the Memphis Zoo so it wasn’t a total waste.  The good news is I can finish the Halloween post I started from the casino a few nights back,.  Yep, gonna take you on the rest of the trail so turn off all the lights and lock the doors – it’s the spooking hour.

Let’s start where we left off last time which brings us to the smoldering groundbreaker.  Ron gave me this item as a gift last year.  It jerks randomly while emitting wailing sounds and lights up.  It is set up for a fogger to enhance the effects, but we didn’t have one to spare this year – picked up a couple more at end of season sales this year, so look for that addition next year. 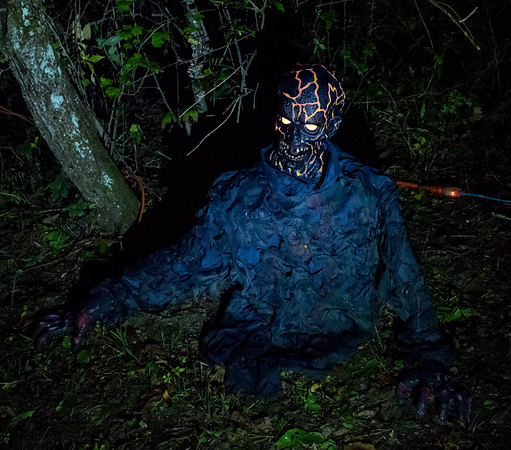 Think I bought  this hanging lady at last year’s clearance sale,.  She lights up and has eerie sayings implying it was your fault she was left hanging on that tree.  A lot of people missed this particular decoration this year due to it being somewhat hidden on a side of the tree.,

Hit the jump to see more sights from this year’s Haunted Trail of Tears.

Got a new severed heard for the trail this year – becoming a standard pick up at the Halloween stores.  Some clever and twisted  individual added the scythe as a bonus effect. 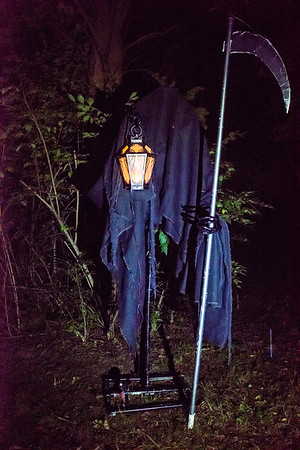 The Clown in the Box prop had some work done to it over the off season.  First was to add quick disconnects between the head and the controller so I could separate the clown for storage.  With Ron’s help we were able to update the controller to use an auxiliary speaker rather than the small single cone speaker.  Due to the outcry last year, I did put handles on the box for easier hauling up and down the hill.  This year I will lighten the foam in the head to reduce the drag on the wiper motor and screw in the letters – they fell off the box in the cold this year.  Actually considering making a new lighter box, that thing is a beast. 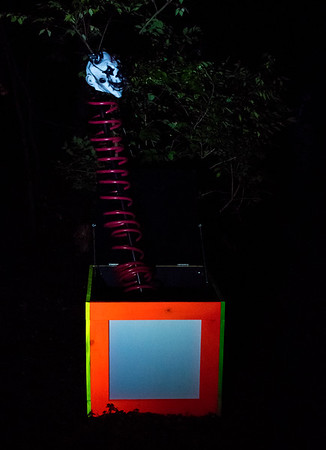 Everyone had plenty of warning. 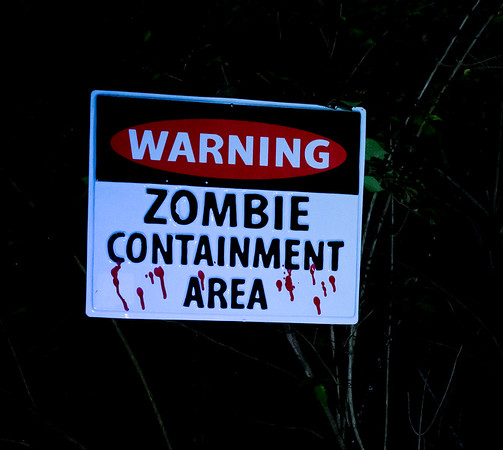 The Dancing Zombie had some major work done on it over the off season.  First and foremost, a guard was added to keep the shirt and pants out of the linkages – those ended up getting pinched in the motor last year effectively killing the prop – this year it worked perfectly – also added a new zombie mask which looked more realistic.

I mentioned during the set up post that my first Posey has stood the test of time on the creepiness scale.  Might give it some touchups for next year with some of the updates from the newer Posey lines.

Ahh, Hugs the Clown.  This year we remembered to turn the eyes on – still a guest favorite and unfortunately for us, for some reason liked by my 5 year old great niece – I’d sign her up for some therapy. 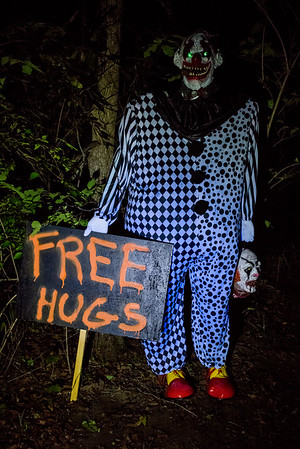 Twisted Harley came out to play this year as well.  She also got an upgrade replacing here softball bat with a new bat complete with a circular saw blade attached to the end – hard to see in this picture.

The Demons were up to their old tricks again.  The head Demon is seen here sacrificing a human heart to the underworld gods.

… and that heart just happened to come from the dismembered corpse being presented by the Demon on the other side of the path.  The plexiglass I used for the Demon hips is too flexible – will be swapping those out for some light wood ones to allow for easier setup,

Got this raising skeleton at Home Depot last year.  Really nice effect as it raised itself 3 feet off the ground.  Already trying to replicate that linkage for new custom props. 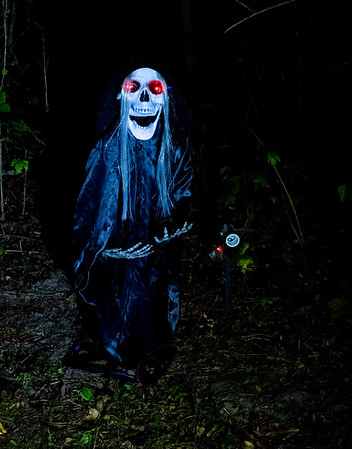 One of Paul’s clowns – if you asking yourself why so many clowns, you need to ask yourself if there is really anything scarier than a clown,

My nephew Derek could not make it this year, but the prop he gave me as a gift last year was once again freaking people out –  the lips move in unison as it speaks.

The highlight every year is Paul’s flaming pumpkin.  This scene is getting a massive upgrade next  year thanks to a post Halloween purchase I do not want to reveal yet, but guaranteed it will be spooktacular,  Notice the ghost rising out of the pumpkin in this shot (courtesy of Linda who took the pumpkin pictures!). 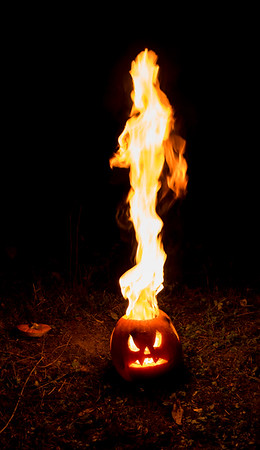 I’ll let your imagination run wild on the next one (although, do you see the skull near the opening?).

All the dark children shall do the Burning Pumpkin’s bidding. 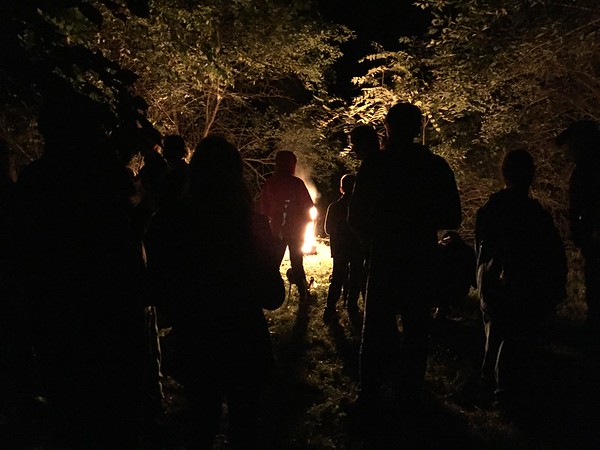 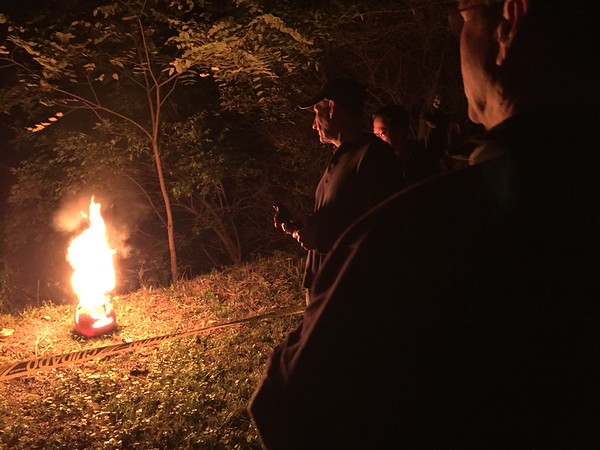 Remember – big things planned for next year… and the key element is currently taking up a large portion of my basement – Linda just sighed there if you heard something coming from your computer.

To enhance the effect of the UV flashlights, Paul also added special paint to most of his props that would react to the flashlights – uber cool.  Will probably hit my Nightwings with that paint for next year as well. 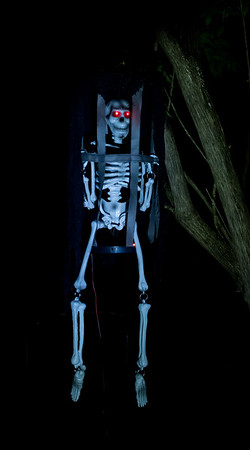 I command the dead to rise and do my bidding.

More of the UV painted props from Paul.

Anybody need a little bit off the top?

One of the most realistic props on the trail.  This is Paul’s animated Herman Monster.  Herman randomly moves at the torso and the head thanks to an Arduino controller.  The effect is so realistic that I am no in the middle of adding this animation to the new line of Posey’s for next year.  They would have made it out this year, but it experienced a glitch – I didn’t have time to do proper debugging on the code – got it worked out a few weeks after the party.

Picked up the stacked skulls thanks to a tip from Brad who picked one up at Menards.  They color shift.

The first prop I ever made marks the end of this year’s haunted trail.  Pretty simple, but a nice reminder of how far team haunt has come over the years. 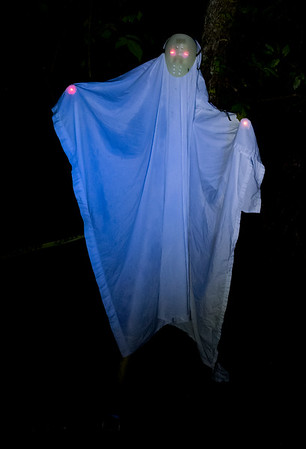 Good to see my brother getting into his own prop building. He thought up this last decoration based on an idea he had while he was soldering up the sensors.  The platform is the awesome solder arm product from Quad Hands.  If you do any soldering, you need this product.  Ron bought me mine as a gift and his kids ending up picking him up one this year.  I can tell I am wearing off on him based on his idea to use this as a specimen examiner – He ended up modifying it to add in our PIR sensor and a creepy plaque.  For some reason our guests were avoiding that corner in our basement hehehehe. 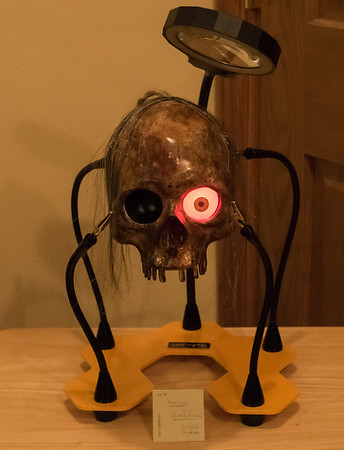 There you everyone!  Hope you enjoyed the trail walkthrough.  It takes a lot of effort throughout the year to put all this together and very appreciative of all the help everyone gives to the task – special thanks go to my brothers Ron who provides valuable help on the electronics and prop building area and Dan who helped with the trail prep including getting the new power outlets wired in the valley – my partners in haunt Paul and Brad who are apparently afflicted with the same Halloween enthusiasm.  Shouts outs also go to Brad’s son Ryan, Sung and Andreas who were warned to what they were getting into, but still volunteered to help – fingers crossed they are willing to volunteer next year.  Lastly, this probably wouldn’t happen without the help and understanding from Linda. She puts all the inside decorations up and handles all the cooking and coordination.  She also has to put up with all my prop building throughout the year and my growing stress levels as it gets closer and closer to the night of the big event.