Good news everyone, I survived the Bix7 run this morning.  I’ve ran that race for 16 years, now every inch of that course by memory and tried countless strategies to figure out the best way through it – no matter what I do, that race NEVER gets any easier and this morning was no different.  I’ve taken on some of the hardest nightmare courses this year all hillier and twice as long, but this out and back hill course along the bluffs of the Mississippi in Davenport IA still puts a hurt on me. Congratulations also to Linda who conquered the Brady Street hill for another year.  I’ll be putting the details up on my other blog as usual, but as of now I’m sitting here wondering how many days before I stop hobbling around.  While waiting for the Alleve to kick in, decided to go ahead and get my monthly quota out of the way. 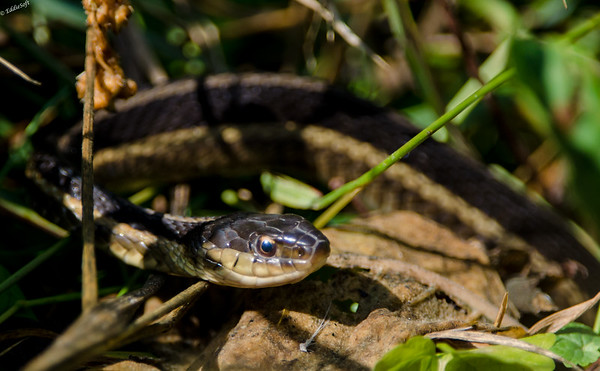 Probably should have given you some advanced warning on tonight’s featured wildlife creature.  I know there are a lot of individuals out there that are not exactly fond of Snakes.  I can point directly to my wife who will likely be moving my pillow to the guest room for even considering featuring such a hideous creature.  Admittedly, Snakes can creep me out a bit if they manage to sneak up on me or catch me off guard by slithering through trees above me.  Otherwise, we get along just fine.   As you can see here, when one is encountered in the field, it’s shutter slapping time.

Hit the jump to read more about Mr. Slither both from this encounter and a couple of other experiences with these slithery creatures.

Not to dwell on this, but to put things into perspective Linda has made it perfectly clear that if a Snake makes  into the house WE MOVE.  No discussion, no reasoning, no debate, no bribing – just a call to the local movers to come pack us up.  You have no idea how stressful this is for me, having helped to build our house in the country in the middle of a forest.  I have to keep a keen eye on the landscaping around the house and make sure nothing decides to slither too close – those that do must be moved a safe distance away (without her seeing it or knowing where it was relocated of course).

So here we are risking my marriage to share a few Snake encounters we’ve had out in the field.  This one you are seeing here was found at the International Crane Foundation on their forest trails back in July 2013.  Before we go any further, I am NOT a Snake expert and, as a result, there is about a 17.3% chance of me actually getting an ID correct.  This one I believe is a Common Garter Snake (Thamnophis Sirtalis).  It might also be a Ribbon Snake (Thamnophis Sauritus) – apparently angles matter as much with Snake IDs as it does with Birds.  In either case, harmless (which you should have been able to figure out from the round head).  A rather cute guy or gal … right Linda? 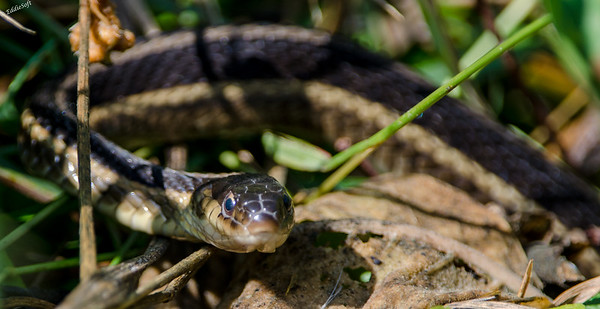 Next up an encounter from our trip to Georgia in May of 2015.  We were checking out a birding spot that ended up being on the grounds of a church.  They had a large pond a ways off from the main building that was surrounded by tall weeds and shrubs.  We were walking around it trying to find a good angle to check out the waterfowl that were hanging out in the water.  I’ve mentioned this before, but when you are looking through big glass, you tend to forget about things that are close – quite the surprise when I pulled my eye away from the camera and saw this. 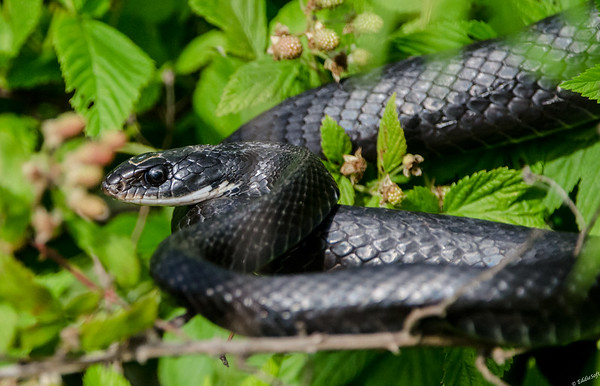 Winced a bit when it came into focus.  This specimen was just moving through the tall shrubs as if it was moving along the ground.  After validating the round head, went about trying to get a clear shot of it through the brush – nearly impossible.  The Beast would get focus on it only to have it slither behind another branch or leaf.  This hide n’ seek game continued on for some time until frustration set in and decided to just go with what I got.  Oh, it also didn’t help that Linda spotted me taking pictures at the bush (and not the water) and came over to see what the excitement was about  – BIG MISTAKE. 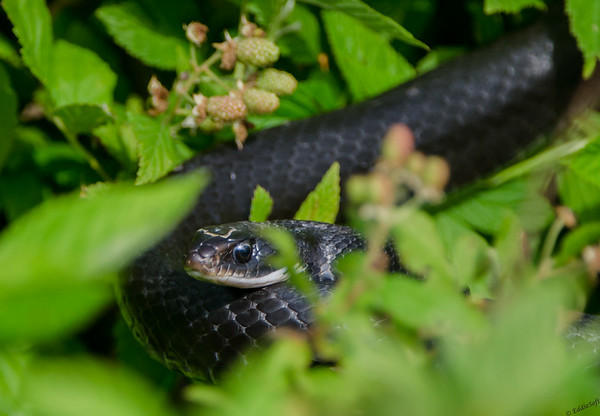 It didn’t take her long to figure out what it was and proceeded to let me know her opinion of the situation – at least she didn’t rip my shirt off my back like she did on another encounter, think in Yellowstone, when one came out on a trail we were walking – never forgiven her for that fit of hysteria and still waiting for her to replace my shirt.

I am pretty sure this is the same species we have hanging out around our house.  Always referred to this as the Black Rate Snake or Pantherophis Obsoletus.  All black, whitish underbelly and speaks with forked tongue.  Again, harmless to us, deadly to mice and other small animals.  They are constrictors and thus kill by suffocating their prey.   I can also relate to you they have an uncanny ability to climb.  You can note that from the pictures here, but I think I still have a phone recording of a call I received from Linda several years back that came thanks to a large Rat Snake deciding to climb up a plastic chair and proceed to stare into the house through the backdoor window.  She demanded I come home from work immediately and deal with the situation.  Thank god it did not find a way into the house – that was a close one.

Lastly I bring you another sighting of a Snake while visiting Lake Springfield (Illinois) in May 2015.  We had just finished photographing a cute family of Mallards (link here), when something caught my eye near the shore.    A small line was forming in the water moving away from the Mallards (thankfully).

Yep, confirmed – a watersnake.  This time Linda spotted it about the same time I did and, say it with me, was not happy about it.  I personally think that Snakes in the water add a whole new level of creepiness.  They have no legs or arms yet manage to flow effortlessly through the water.  This also reminds me I have a set of picture with Ron from Emiquon of a cool snake that was hauling around a large fish – making a note to get that set processed to share with you. 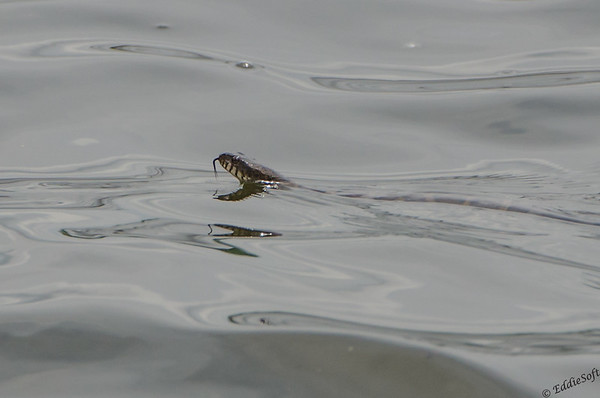 I grew up in Springfield and spent a lot of time fishing there with my father and brothers.  I also had an Aunt and Uncle that lived directly on the lake and would take us out on their boat to isolated spots to fish.  It was pretty common to see various snakes moving about the water and we always classified them as Water Moccasins.  Was informed they were venomous as well.  It wasn’t until much later in life that I learned this also equates to the more common name Cottonmouths (Agkistrodon Piscivorus) – a pit viper.  Based on some brief web reading, it is common to mistake Northern Water Snakes for Cottonmouths in the field.  After looking at a large number of pictures, putting my money on Northern for this specimen.

Although, the flatness of the head in the shot above is a bit concerning, but the pattern seems to fit the Northern better.  Feel free to weigh in assuming you were able to keep your fear of Snakes in check and make it this far.  Highly doubt Linda made it past the first picture ha.  Better wrap this up, the Alleve is starting to kick in and time to roller out the legs.  Sweet dreams everyone!

2 thoughts on “Thankfully Without Wings”