As a general rule, I try not to get more than two race recollections behind at a time.  I realize this may seem like a ridiculous amount of time between an event post for some of you, but this simply means those individuals have not spent a lot of time on this site… or look at any of the non-running posts seeing as how those tend to lag years (and that is not an attention grabbing hyperbola – nope, that is an attention grabbing embarrassment ha).  Guess what, this guy has another race this Saturday which means I better get on the stick err, perhaps more appropriately, in the shoes and get my recollection out on the Steamboat Classic 15K held back in June.

I could probably just start and complete this whole recollection in ONE picture. 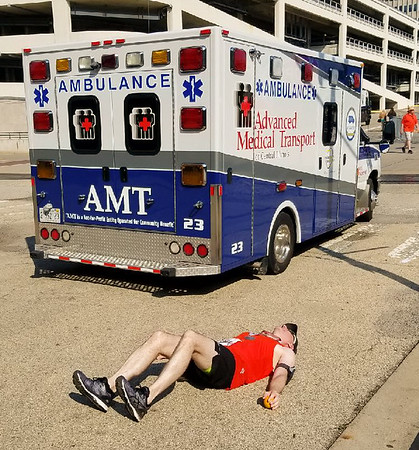 How is that for a summary?  If you are curious on how I got to this point, hit the jump!

Shocking eh!?! Before you get too concerned and start wondering if this is a ghost writer, I survived.  For another year, I donned the orange, pinned on a number and made my way to the starting line to take on Illinois’ Toughest 15K.

I went with words of wisdom for my pre-race picture – that’s right, CRO ROAD.

Wait.. maybe it STOP.  Yes, I stand corrected, the word of wisdom for the day was STOP.  This happened to be my motto for the race, as in this year I refuse to STOP.  Last year this race called me names, beat me and made me write bad checks (link here).   This absolutely torques me off when this happens – luckily only succumbed to fatigue in a couple of races so far.  Every time to this point it has been the heat that took me out.  The heat stroke episode (link here) definitely left residuals around that still take hold of me if I’m not careful.  The day started out cooler than usual, taking a lot of early stress out of the equation.  Take note of the highly focused runner to my right – no, not the one playing Pokemon on his phone. 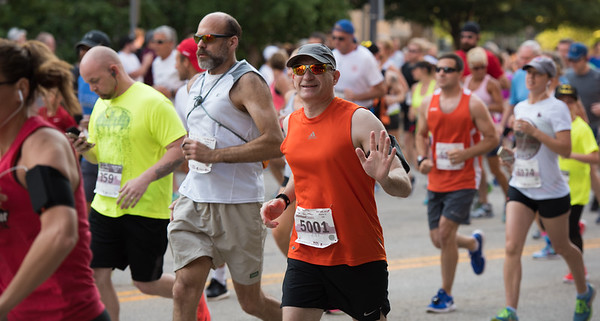 The cool temps stuck around for the 2 mile run out and one loop of the evil hill.  By the time I had made it to the base of the mega-hill for the second traversal the Heatmiser paid a visit – “Whatever [he] touch[es] starts to melt in [his] clutch  He’s too much”.  This course is hard enough without having to battle humidity.  Certainly wasn’t going to get beaten by a hill after all my training.  Locked it in, stared at a point on the ground several yards out and pounded it out.  That left the rest of the second loop and then the 2 mile run back.  I could feel the second loop draining my energy and was relieved when I hit the long downhill to the returning flat.  Last year, it was around mile 8 that the body shut down.  This year the body wanted to shut down around 8 again!  Picturing an image of CRO ROAD, I vetoed the shutdown request and pushed through some dark moments.  We have a running joke (ha) while Ryan, Sung and I find ourselves zoning out on a difficult hill – “going to the dark side of the moon”  which translates to … can’t talk right now, think my lungs are going to explode”.    It took all my might, but was eventually able to catch and pass these two elite women below. 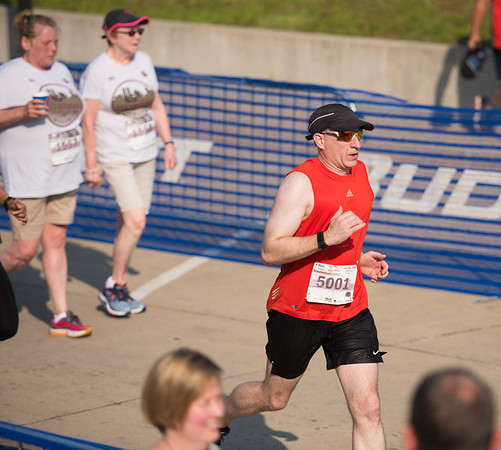 Time to find that finish line and give these legs a rest.  I look soaked in this shot – most of that was due to double dipping at the water stops – one in the mouth and other over the head to try and cool the body temp.  Recognize anyone in this shot…

Yep, 1 hour and 22 minutes since the start and that dude was right there with me.  Kudos to him – jealous of those long legs.  I did laugh to myself when I saw that STOP sign when I turned the corner to the finish. 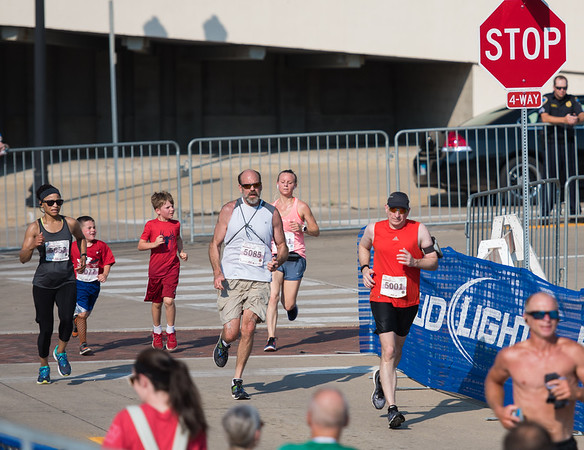 Not a PR that day, but a redemption of sorts from the year before.  This year I defeated the voices of doubt in my head (which shockingly sound exactly like Linda hehehe).  Shaved off EXACTLY two minutes from last year. Still slower than where I wanted to be, but tuning the body for trail running has cost me some speed on the road. 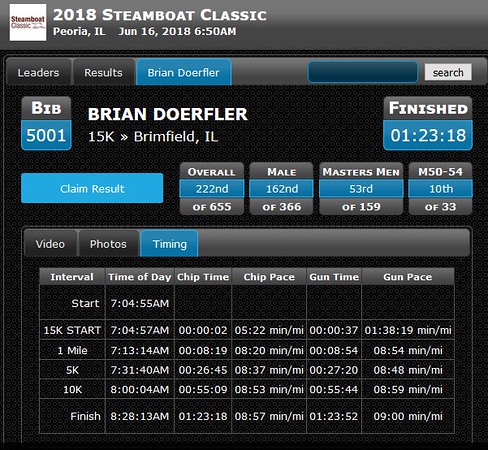 .This was our first take of the traditional post race shot.

Decided to spice it up a bit with the first shot.  So glad that ambulance didn’t back up while I was doing that.  The drivers were probably wondering what we were doing.  In closing decided to point out an incredibly stupid change they made this year.  When we started, there were surges happening that were not normal.  At the time it didn’t occur to me what the problem was.  After the race, Linda informed me she learned that they had restricted the starting line this year.

Can’t remember the exact statement on why (maybe Linda can correct in the comments), but something along the lines of giving the feel of open space after the start. Huh!?!  Purposely squeezing everyone together at the start to give me the feeling of breaking out totally baffles me.  If they want to funnel starting much farther back, that is fine, but right near the start just causes massive squeezing from the outsides trying to make it through the goalpost.

Hoping they solve this next year.  Other than that, another one in the books and another medal for the wall.  Oh, speaking of medals, this year’s was far better than all the ones they have had in the past

2 thoughts on “Redemption of Sorts”