Greetings everyone!  It has been a bit since I have posted and for that my utmost apologies.  There is just something about a few hot days, a couple of passes of fertilizer followed by a a whole lot of rain that somehow makes my grass think they’re in a race to the clouds.  At this rate I’ll be mowing every 1.3 days!  Taking advantage of the fact it is raining this very minute, thought it would be a great time to put another notch in the post counter.  Although we are technically a month early, let’s welcome Summer to the blog… 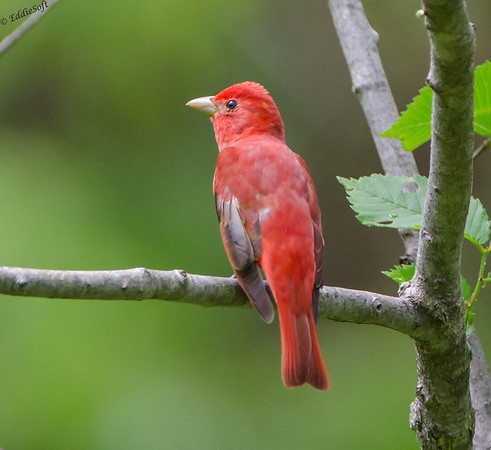 Well, a Summer Tanager that is.  This gorgeous bird was found on an outing at Starved Rock State Park.  My brother Ron and I had the opportunity to do a day of birding there back in May 2015.  Wait a minute, come to think of it, it was pouring down rain that day too.  If I recall correctly we ended up having to stand under tree cover waiting for a lightning storm to pass over.  Okay kiddies, let me make a short PSA – it is not recommended you stand under tall trees during a lightning storm.  Don’t even think about it, don’t do it and certainly don’t reference this blog when they scrap your body off the ground and drag your butt into the ER after disobeying my advice.

Hit the jump to read and see a bit more about the Summers!

As you can infer, things turned out okay for us and the storm finally passed over allowing us to get some birding hours in.  The clouds did remain though which forced the ISO way up on my shots and we all know what that does to the subsequent images – that’s right grain city.  Hopefully enough of that was taken care of in the digital dark room but very few wall hangers that day.  By the way, on the curious side, there was a race going on that day in the park, but the official didn’t call it on account of the lightening.  Surprising, since I am aware of officials herding runners off a course if there was even a hint of lightening emerging.   Linda knows my greatest fear is getting to the final miles of a full or half marathon only to have them call it (she also knows I’d probably finish anyway).

… but I digress.  While walking the upper levels of the lookout structure we spotted a Summer Tanager on the branches of a dead tree a significant distance out from the platform. 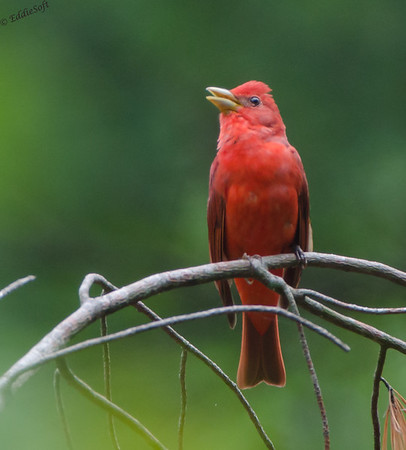 Not having a Summer Tanager (nor for Ron if I remember correctly), we shot the hell out of that bird.  I probably had a hundred shots of a very tiny red bird on a dead tree shot at high grain and quite suckilicious.  Luckily, all of those shots were put on the backlog because we later located this couple while back down on the main trails.  This time we were able to get quite close 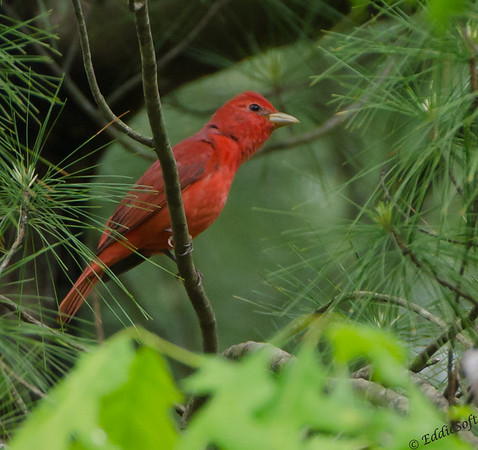 Still had to fight the overcast, but at least you can make out the key features of the bird.  Probably due to the brighter plumage, we first spotted the male in his full royal red garb.  Devoid of black as in the Northern Cardinal, the male Summer Tanager is head to tail red.  The female Cardinal is still highlighted in the reddish hues of the male, but tend to be  a gray brown for the dominant color.  Contrast that with the female Summer which sports a very pretty hue of yellow. 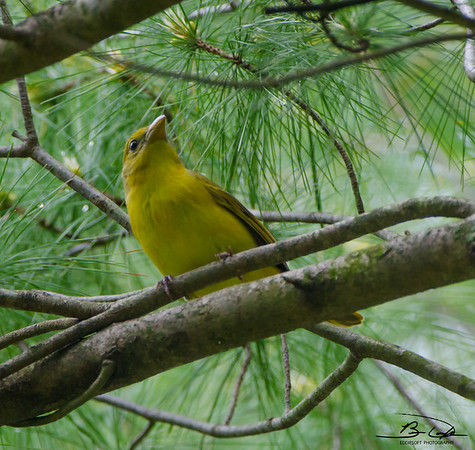 She was much harder to get a clean shot of.  Most of her time was spent swiftly moving through the pine trees purposely positioning herself behind annoying pine needles to drive my autofocus crazy.  The two shots of the female seen here are the only decent ones I was able to muster (pun intended).  The male was a bit more docile and tended to keep to the more open spaces allowing for a number of opportunities to enjoy the beauty. 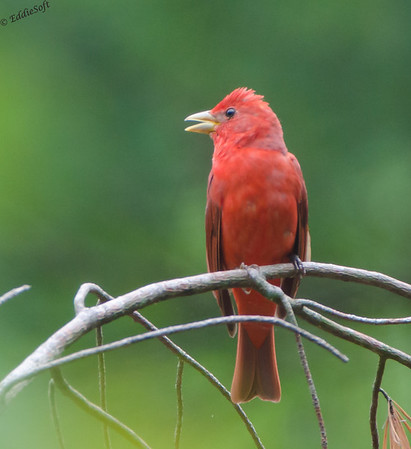 Since this is a new bird, let’s jump over to Cornell and see what interesting facts they might have about these brightly colored bird.  First off, they are the only red head to tail bird in North America.  It should also be noted, they refer to their coloring as strawberry.  They feast on bees and wasps caught in mid-flight.  They will bang it against a limb to kill it and then rub the stinger off before devouring the tasty meal.  They were originally thought to be in the true Tanager family, but now they have been reclassified into the Cardinal family.  Lastly they migrate across the Gulf down to Central America in the September/October timeframe.- returning in late May so these two must have just completed their long journey back. 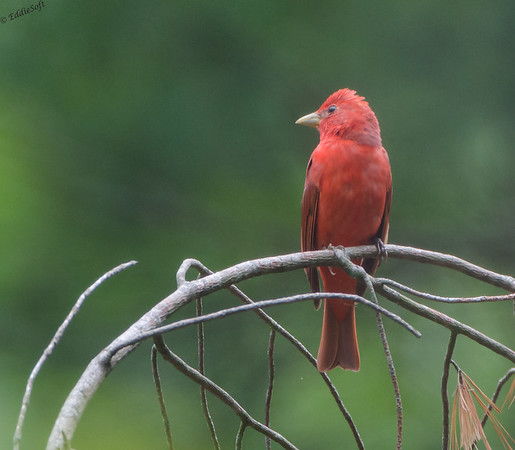 Pretty happy I can put a check mark next to the Summer in my North American Birding List.  If everyone behaves themselves, I just might feature another Tanager in an upcoming post … but only if you eat your meat – how can you have more Tanager pictures if you don’t eat your meat!?!