Welcome back everyone!  Still busy as hell around her at LifeIntrigued.  I have a half marathon race tomorrow in a creepy cemetery, Halloween is just around the corner and my basement is “finish me” shaming me every time I go down there.  Luckily almost all the materials have arrived to finish out the trim in the basement, so hoping to get through most of that this weekend barring any issues with the run tomorrow night.  Making some progress on the decorations but still a lot to do there .. not likely to get to everything I was hoping to have done, but it should be another good display with what appears to be in my means.  Of course, if that isn’t enough, I have blog quota demands to deal with as well – so far those have not been writing themselves, so let’s get to today’s feature. 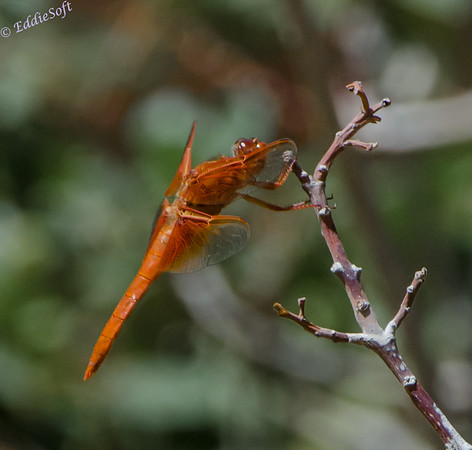 When it comes to Dragonflies, they really do not get much cooler looking that the one above.  Well, except for the one below, but we’ll get to that in a second.  Decided it was time to get this post out there.  I’ve been sitting on these red dragons for a while now.  It occurred to me that they themed well together because they are both Dragons, and well… they both feature the color red – albeit the one above is more of an orange than a red.  One thing about them is they were shot in completely different locations.  The one above I believe is called a Flame Skimmer.  As with all posts on this site, corrections, confirmations, complaints are always welcome in the comments.  This particular Flame was located at Red Rocks Canyon near Las Vegas Nevada.  There have been a number of posts for this particular site on this blog due to its huge diversity in photography options.  Linda enjoys taking shots of the gorgeous red hues in the rock terrain and I spend my times hunting for anything that moves on the ground, in the air and guessing water if they actually had any water there.  I mention the latter because ironically, this particular dragonfly prefers hanging out near water supplies such as hot spring out in the Southwest.  Note as a unique trait, the Flamer doesn’t actually seek out prey.  They basically hang out around the house waiting for the food delivery guy to pull up and hand them dinner.  A good life if you can get it I guess. 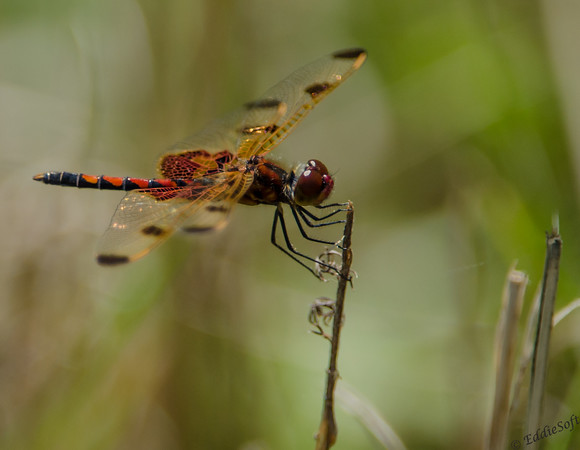 The dragon above has to be my favorite so far.  The deep red body accentuated by the orange tinted wings and the gorgeous red pattern on the lower abs and tail.  Going off of images my brother Ron sent me and some quick searches on the internet, this appears to be a Red Saddlebag.  The only thing that leaves a bit of question on that is this one has a very distinct red pattern on the back.  The reference images I see have a much  more blotchy red coloring – what do you think?

Hit the jump to see a couple more shots 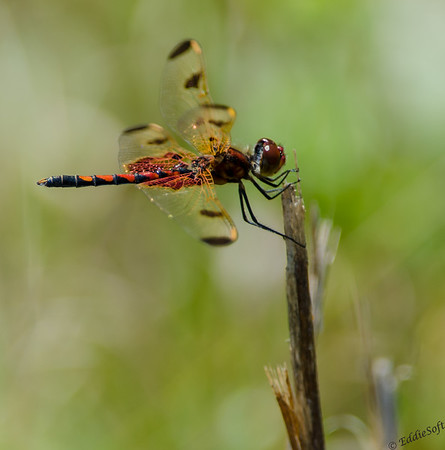 For now I am going to assume it is a Saddlebag.  Again, using my brother’s research leg work, the Saddlebag was so named because of the blotches in the back of the wings remind people of .. you guessed it .. saddlebags.  Unless you are not a horse fan in which case they might just remind your of blotches in a Rorschach test – “I see a clown attacking puppies with a knife and drop kicking kittens.. does that classify me as normal doctor?” 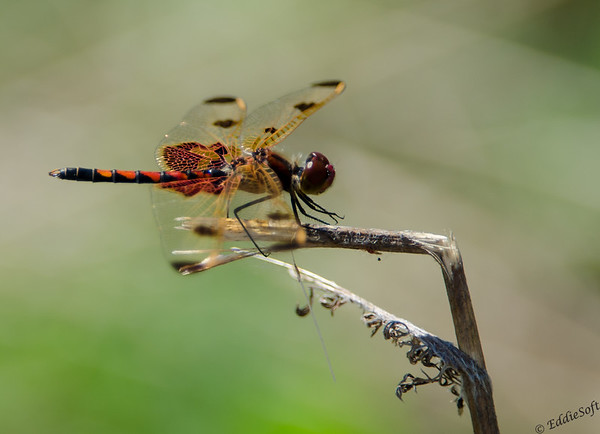 These pictures were shot while at the International Crane Foundation up in Baraboo, Wisconsin back in July 2013.  I told you I have been holding on to these for a while.  Linda and I were walking their back trails and this scarlet draped one was hanging out in the marsh area.  Ron actually reminded me of these when he sent me his shots of another Saddlebag he took while at Wheldon Springs.. I think – now that I look back at his email not sure if he specifically stated that or if he had just told me – Ron, please confirm in the comments if you read this. 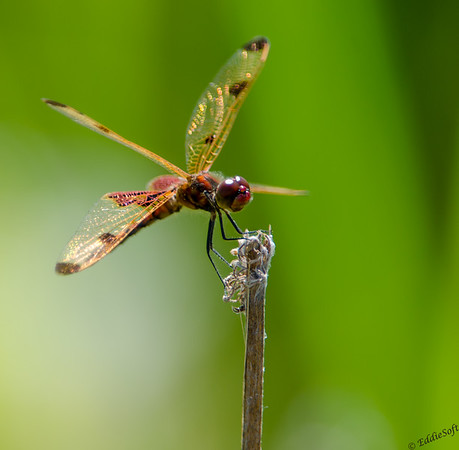 As mentioned earlier, clearly my frontrunner for favorite Dragon and I must say, my collection is getting pretty large.  This is one of those Dragonflies I’d even spend time taking shots of even if there were birds in the area – typically it is the lack of birds that forces me to hunt out alternative things to shoot – first look Snakes, then Dragonflies, then Frogs/Toads, Spiders and then creepy insects is generally the in field progression.   I’d give you some more details about this Dragonfly, but there appears to be a research strike on them.  This Insect Identification site basically says check back later we got nothin’ (link here)

Oh, well, need to get back to work – how about I leave you with an interesting shot of another Dragon or Damsel member… 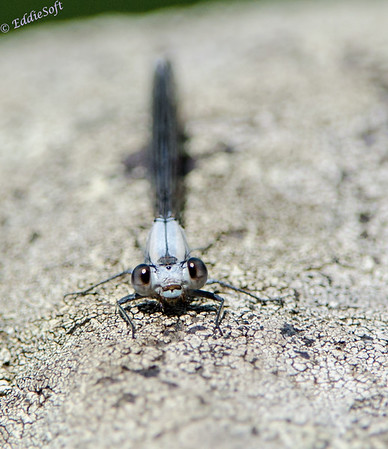 Not sure of what it is, but I really liked the interesting angle – a small Boo in celebration of the upcoming holiday hehehe.