Now this is a refreshing change – how about a post about an event on THE Day the event took place! I know, I know, crazy talk (or maybe that should be ‘type’). To be honest, it is more out of convenience than a break with tradition. Like last month, September is one big pile of to-dos as we get ready for our annual Halloween party.  Each morning I get up and look at my list and get depressed, but each evening I try to get a few more items scratched off the list. My brother is also providing a huge amount of help as he has been working on some prop mechanics for me (that would be foreshadowing for the post part posts).

So today was the annual running of the IVS Half Marathon or as I like to refer to it as – my home course event. 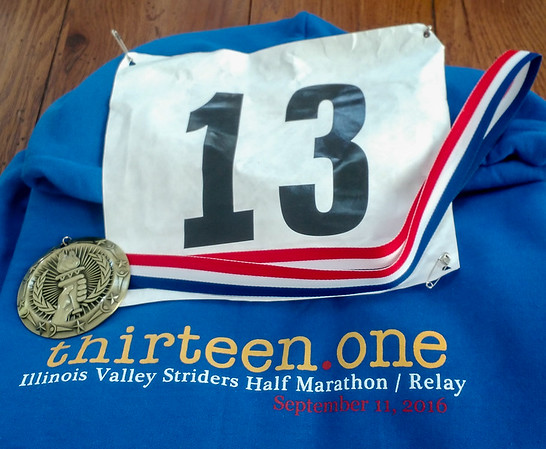 This race is held in the hills of Springdale Cemetery.  If you recall, that is my weekend training ground.  My friends (Sung and Ryan) and I climb those hills about every Sunday morning rain, sleet, snow or shine.  We probably know every pebble on that course by now.  Unfortunately, Ryan and Sung were not able to run with me today so it was a pretty lonely run.  This year it seemed like my lucky rabbit’s foot (symbolism only, I’d hate to think whacking off a cute and cuddly rabbit’s foot would produce anything good karma wise.) was replaced by black cats and ladders.  Normally I take it a little easy before a big race, but this year I had to clear trails, mow, weed, chainsaw and yesterday stain and varnish all the basement window trim.  Somehow during all of this I managed to tweak my back and for some strange reason I bruised the ball of my big toe yesterday afternoon – SUCKAGE.  I should have known something would go wrong when my race bib ended up being 13.

Speaking of the race bib, this year’s was absolutely ridiculous.  They finally got rid of the foot chip – FINALLY, having to stand while someone tries to take those off your shoe after a tiring race is torture.  Unfortunately, rather than replace it with the more common single strip sensors on the back of the bib, they chose to use this god-awful Active-IPCO chip.  Not only is that thing huge, but it is stiff and heavy.  I can’t tell if it was to accommodate the larger sensor or they just decided to go with an obnoxious sized bib but that didn’t help things.  Look at the picture above and imagine that thing hanging across your stomach.  I heard other people complaining about it as well.   I also signed up late which means the cost of this race was out of alignment with the race amenities – which are really weak.  They have a pot luck which is okay, but this year, no door prizes, only gave out trophies to the first two in each age group (more on that later), your packet consists of a bib, a page with the course map on it and a hoodie (note, the hoodie is the best part of the race).  This year, the timers showed up just before the race and I am still baffled on how they got the start time – pretty sure they used race gun for it and assumed we all crossed the line at that point which is incorrect because I always start in the back of this race so I can entertain myself by picking people off.

Hit the jump to see how the race turned out

We gave a moment of silence for 9/11, played the anthem and started on our journey.  I passed half the participants before I had made it a mile, settling in behind two young women that were pacing exactly where I wanted to be.  We picked off some more and then made our way to the first big hill.  Surprisingly, our collective pace was creeping up faster but attributed that to the nice 55 or so start temperature.  Halfway up the hill I was even with the women when all of a sudden one of them says “okay, that’s enough” and the both started walking – WTF.  Hate when that happens – not only do you lose a pacer, but you get demoralized.  Oh well, time to go find another rabbit.  Still feeling good, the pace improved even more into the 8:27 range.  Too fast for that early in the course but what the heck, still feeling good.  I ended up passing some more people who were by now realizing they underestimated the course.  What seemed like in an instance I was running completely alone – there wasn’t anyone in front or behind me as far as I could see.  That was bizarre, but that is how the rest of the race played out.  A lady ended up catching me at the turnaround point (kudos to her fitness) and two other young girls (clearly college runners of some sort) caught me at mile 11, but other than that there was no one around me.  It was like I was out on a training run, but even then I see people now and then running in the area – other than the water stations and the Bradley kids they bring in to help keep people from getting lost of the course – NO ONE.

Now for the bad part – remember how good I was feeling on the first loop – the second loop was payback.  As I started back out it seemed like a hole developed and all my energy drained out on the road.  Think all those activities during the week caught up with me… not to mention the aches and pains were starting to get louder.  More annoying than anything was a small rock that found it’s way into my shoe – it figuratively and literally became a part of me thanks to being unable to scoop it out on the run.  Not wanting to stop on the course, I plowed through with a few dark side of the moon moments especially on the last two large hills – although that stupid little incline right before the last big downhill once again kicked my ass – there is something about that damn section that Ryan, Sung and I all agree is total torture.

My pace creeped back to 8:45 (according to my Runkeeper) which was my planned pace at the start so overall not too bad – wasting those fast early laps was a disappointment, but the fuel tank was below E.

Since there was no one around me at the time, it was hard to tell how I fared… turns out better than expected!

Due to the small size of entrants, they made the age group 45 to 54 – usually it is more like 45 to 49.  I’ll take third but see those tiny little asterisks in front of the first two – they only gave trophies to the first two finishers.. drat.  In case you are curious, that dude ahead of me came in about 4 minutes ahead of me – had I been able to keep my pace for the second half it could have been a contest.  Oh well, third is respectable on that course (looks like Steven succumbed to the hill god).  In case you are wondering, I finished 17th overall for the half marathoners – it shows 54th, but the rest of those were relay runners (only ran one loop each).

My personal photographer was busy running Raven in an agility show, so no action shots this year.  I did take a picture of the starting line statue.  A little disappointed this year seeing that the American flag was not taped to the hands this year (see last year’s shots link here).

My Runkeeper says my gun time was 1:52:08 and my pace was 8:46 – last year was a 1:51:35 with a pace of 8:31.. I am waiting to see the final timings (not posted yet) but guessing that Runkeepr pace is off.. mainly because it took me a bit to turn it off and it only gave me credit for running 12.79 miles so once it again it screwed me!   If they publish those, I’ll update this post.  All in all good numbers, but this year took everything I had and still feeling the effects of it.  It didn’t help that I went out later today and tried to chainsaw a tree, but before making the first cut a swarm of hornets got pissed off that I was stepping on their ground nest.  They ended up stabbing me a few times before realizing what was going on – needless to say most of them are laying dead on the ground now and the rest will meet their fate when they return to the hive – we own your hornet asses’ … think about it the next time you get all cocky with your stingers.