Now for something completely different!  It has been about two months since I’ve brought you a project post (that being the 2015 Halloween pumpkin post (link here).  With some extra time on my hands I felt it was time to get some items taken off of my to-do list.  Some recent, some old, some very old.  There are actually  multiple projects summed up in this post.  As an incentive, I’ve had them placed so they are the first thing that I see when I walk into my den.  You would think that would provide enough incentive to get them out of the way … but it didn’t thanks to having too many things on my plate (one of which is Project Auuuurrrnooollddd which completed another phase right before Christmas).

Adhering to a LIFO queue process, the first item on the project list was a recent Christmas gift received from Linda.  This was a set of 2 wind up puzzles called Scorpion Rising.

Essentially this consisted of a 3D model that you built on top of a standard wind up coil.  Once assembled you could turn the crank and watch your creation walk.  I figured I could whip these two out in about 15 minutes … until I opened the package and saw what I was dealing with.  There was a trifold hard foam based card that had a series of laser cut outs barely distinguishable by the naked eye.   First action was to go find my reading glasses – the instructions were hard enough to read with their tiny font, but seeing where the cutouts were on the card was basically impossible without them.  The worst thing is there were tiny interior cutouts on the pieces that required me to find a tiny screwdriver set to proper punch them out.

It was pretty easy to see the main concept based on the motor mechanics.  Once wound, there were two pins offset and on different sides from each other which clearly indicated they drove the feet.  Knowing that element helped visualize how the additional pieces should go on.  Getting them actually put together was the hard part.  This puzzle was probably intended for smaller fingers.  It was also apparent no one who manufactured this puzzle ever reviewed the directions due to a major flaw – an ISO view doesn’t help you much if you are putting black pieces on black pieces.  Imagine your high school aptitude tests that show a silhouette of two objects and asked to align two objects to make that basic shape – damn hard.  Here is a quick shot of the directions and the provided puzzle pieces.

The other annoying thing is they continued the steps on the back of the sheet but did not replicate the cutout alignment on the card.  This forced me to keep turning the paper over and over again while contemplating what the hell they wanted me to do next.  It didn’t help they opted to position the various steps based on maximizing the paper – translated – the instructions were not in order on the page, well at least not in your standard US left, down, right layout approach.  It was a struggle but the scorpion finally came together (see the first image).  With a pat on the back, the little crank was wound and the Scorpion unleashed on the world… for exactly 4 seconds.  That was the duration of the coil.  The little dude walked for a total of 4 seconds.  Granted it looked cool for that 4 seconds but this dude just took 1.5 hours of my project day.  Based on those results the other scorpion was put away for another rainy day.

Next up was a gift the Makuta’s got me – pretty sure last Xmas or possibly my birthday – can’t remember but as far as a perfect gift for a project loving birder like me .. this was it!

Hit the jump to see how this project turns out as well as a third project!

Three birds made out of LEGOs.  Super cool and still amazes me it took this long to get around to building them. As a slight excuse I knew it would be fun and didn’t want to waste the enjoyment through a rushed event – nope, this needed a lazy sit back project day to thoroughly enjoy the process.  So, essentially you get three birds.  The European Robin, the Blue Jay and the Green Violetear.  Each bird came with its own gorgeous set of directions.

Each had an intro by the creator, a brief bio of the featured bird and a graphical set of directions showing how to put the custom LEGO pieces together.  Those familiar with the high quality LEGO Architecture sets (link here) will have a good feel for the directions – same high quality pages and crisp graphic style. 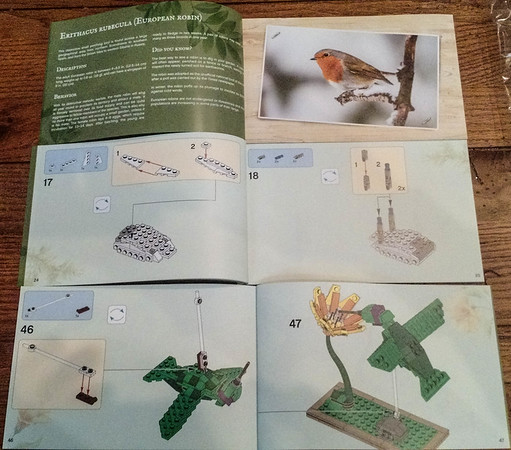 They also took the extra step to sort out the birds into separate bags – two each for the first two birds and one bag plus a brick plate for the hummingbird. 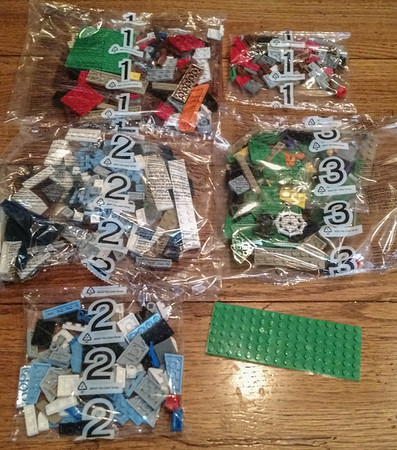 From there I opened both bags for the Robin and went to work.  The creator put some definitely thought into how these creatures were replicated in plastic.  Coloring and key features were transferred nicely into the blocky format successfully capturing the essence of the featured bird.  It took about 1.5 hours to finish out this bird, but truth be told I was going slow and savoring every detail in the construction.  I did not go all the way back and verify, but my OCD tends to come in handy during projects like this.  As a result, it bothered me a tad when I noticed there were two locations that looked like they were missing a LEGO.  I went ahead and added those two during the middle of the build only to find out I came up one piece short (the same type of the two I added on my own).  Find it really hard to believe I missed a step and equally stunned that the set would be short on.  No big worries, I adapted with some extra pieces and will be surprised if anyone were to notice.  Here is the end product!

Next up was the Blue Jay.  Not one of my favorite birds by any means, but it was a fun build.  The Robin had some moving elements in the tail and toes.   The Blue Jay featured movable head and wings.  This used a number of custom blocks for the crown, bill and the half cut pieces on the wings.  Due to familiarity with the new pieces this build only took me about 1 hr and 15 minutes.  I did end up short a 6 knob grey LEGO on the bottom of the chin.  There was an extra white piece but opted to use a leftover grey 4 and a 2 knob.  Here is the finished shot of the Blue Jay. 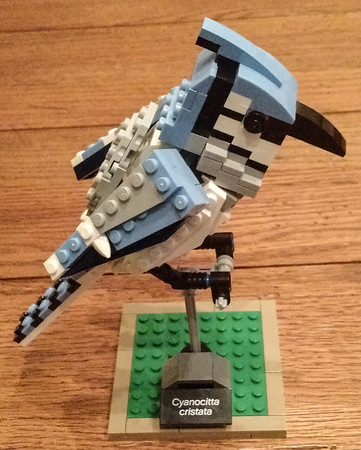 Next up was the Hummingbird.  This set had less elements than the other birds but loaded with custom pieces.  The flower was completely custom and there were a number of half cut and uniquely formed pieces on the bird itself.  By know I was well versed on the standard build elements and moved through the directions much faster.  There was a brief slowdown until the realization the head was on upside down.  I mistakenly thought the ornate looking side was on the top – in fact, the most detail is pointed down on this build.  You can see the added detail from underneath if you look at the box shot earlier in the post.  This build only took 45 minutes to close out the trilogy.

Assessment – a lot of fun!  Highly recommend it for birders and non-birders alike who enjoy spending time on a build project.  Those three birds will have a nice spot on my project build display.  I should point out there were additional LEGOs left after each of the builds.  A quick look back didn’t reveal any missed steps so these must have just been extras.  Not sure how this is cost effective for the company unless they are the same kits used for other LEGO sets (doubt this based on how custom some of the parts were).   Thanks again to the Makuta’s for thinking of me.

Keeping with the LEGO theme, I embarked on the last project for the day.  This is kit that Linda got me as a gift more than a year ago.  She had bought me a number of the LEGO Architecture sets and picked up the Guggenheim for me to add to the collection.  The box met an unfortunately fate, but it’s the insides that count. 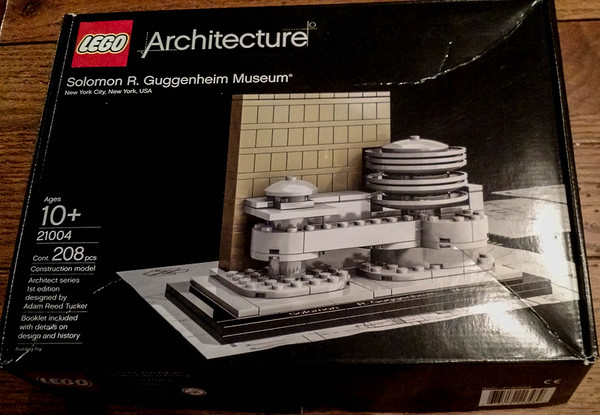 In the same format as the previous sets, the pieces were nicely packaged and the instruction booklet was once again a thing of beauty.

A brief description of the building is provided along with details of the architect (Frank Lloyd Wright in this case) and well depicted graphics showing an ISO view of the finished step with a brick bill of material.

Unfortunately, the Guggenheim doesn’t have a lot of distinctive elements in the main highrise which resulted in about 4 layers of simple brick builds.  The lower portions were stock full of custom pieces including the curved block elements and the cup components that were stacked to represent the cylinder structures.  What doesn’t show up well in the pictures (or the finished product for that matter) is all the foundational bricks that are added in the initial phases.  There are actually 3 layers of bricks under the main platform that represent the inner foundations of the structure.  These sets are part of the Architecture line and they make a point to take you a little deeper into the construction that just the familiar visible geometry.

Build time came in at 1 hr and 15 minutes thanks to a stupid placement of a brick that required me to pop off part of the foundation in order to get grip enough to pry it off and put the proper piece in.  That probably cost me ~10 minutes.  At the end there were only two pieces leftover.  A quick check of the directions confirmed that these were indeed extra pieces. 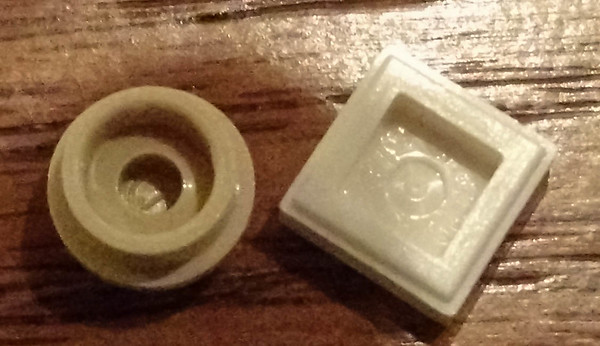 There you have it.  A three project day!  The Scorpion was a little tedious and the LEGOs were as enjoyable as expected/hoped.   It will be nice to be greeted by the finished products each day rather than the constant reminders of my slacktitude.  Have a good one everyone and best wishes for your own kick back, let the creative juices fly project days of your own.