Back home now which means back to work on Project Auurnollllddd.  Good news is the ceiling grid is completely done now along with all the full panels installed.  Just need to cut all the edge pieces and get the lights installed and I’ll be good to go for the upcoming party.  If all this gets done before then it will be a huge miracle since in the midst of this we have to prep for a new shed and then there is that whole training thingy which will have me pounding pavement for hours and hours at a time.  This, of course, doesn’t get me out of my posting duties so let’s just get to that. 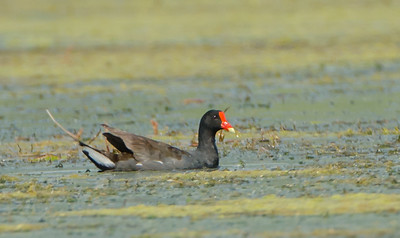 Today’s post is brought to you  by Mr. Softie.  Not sure what my problem was with these pictures other than just plain poor execution.  I’d be willing to accept failure a little better if it didn’t happen on TWO different occasions  at Emiquon National Wildlife Refuge.  This bird is becoming a nemesis at the level of Wild Turkeys.  Not matter what I do, my Turkey shots are never up to par.  There are some more recent ones in the tin from a backyard encounter and a couple more while out on shoots that hopefully came out better (fingers crossed).  Rather than wait  until I get better shots of this particular bird, figured it was time to add it to my bird count. 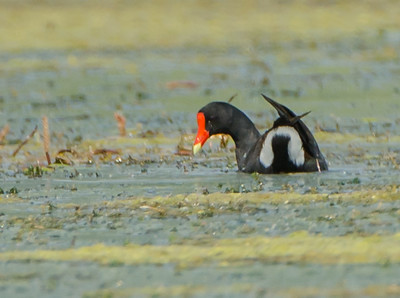 Hit the jump to find out what this bird is

This bird actually goes by two names.  The easiest to remember is simply Moorhen.  Nice and simple and easy to spell.  The official name (I guess) is Common Gallinule. The latter being the name that always escapes me and forces me to Google to get it spelled right. I say we stick with Moorhen.  They are part of the Rail family and close relative to “pond chickens”.  That would be my name for those damn American Coots which infest all the waterways around here.  At least these Gallinules have a bit of distinction with their bright red bills.

This particular one hangs out at Emiquon.  It was there for at least three visits there – one while I was scouting out the spot for my brother’s visit and twice when he was down here.  The last time we were able to see her with her chick… possibly chicks – haven’t had time process those shots yet but those were late in the day and buried in reeds forcing my zoom to travel all over the place.  Now I did get some awesome shots of my brother taking a tumble down a marsh hill trying to get a shot of this bird (it was awesome). 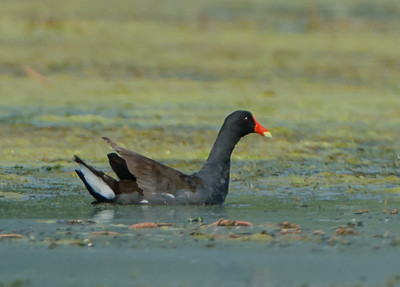 So these Gallinules possess toes as opposed to webbed feet which allows them to travel in among the vegetation quite readily.  All About Birds (Cornell) lists them as Dabblers but I can’t say I’ve actually witness that.  Like those damn Coots, this one just floated along the surface and skimmed things off of the surface.  Beyond that boys and girls there isn’t much else to say about them.  Cornell’s cool facts are tepid at best.  I had to actually Google for other references to learn why it has multiple names.  The site http://www.nemesisbird.com had quick description on it (link here).  By the looks of it, AOU made the change in 2011 due to breaking the species into two.  We now have the  Common Gallinule and the Eurasian Moorhen.  The site goes into a little history but in summary – it has a history of name changes and that is where it stands for now – wouldn’t be surprised if it changed again.

That’s about it folks.  Crappy details and fuzzy pictures – if it was me I’d ask for my money back.  Don’t fret, there are plenty more soft pictures on their way and if you behave I might give you some better quality images in at least one of the planned remaining posts for this month.  I’m still bummed the last shot didn’t come out better.  The dragonflies that were frozen in the shot along with the pond algae give a nice composition for this species that prefers the marshes.  Hey, that just reminded me I have some shots of this bird from the alligator swamps of Georgia (for the record, the place where my UB abandoned me to fend off very hungry carnivores that didn’t appreciate my presence).  Maybe I’ll move those up the queue and see if those are crispier.  Until then happy birding.