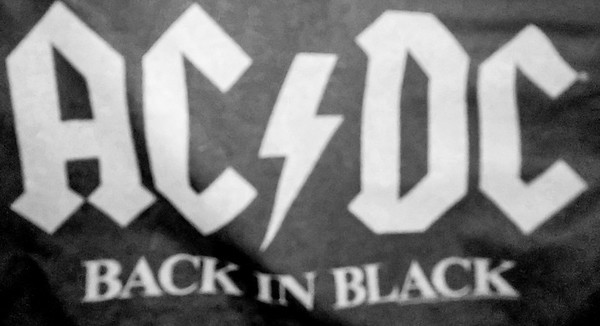 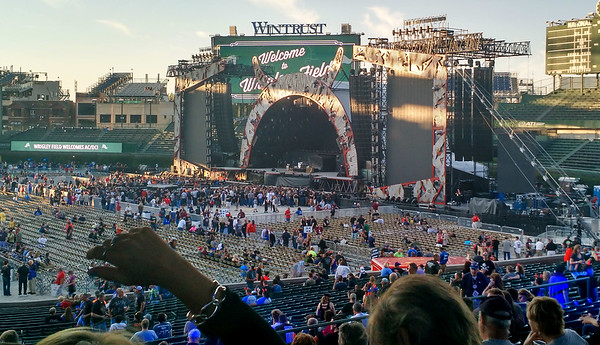 The backing band was something like Vintage Trouble, or as Linda called them – the rock version of Otis Redding,  They were alright, but not the type of band this crowd was there to listen to.  Last time they brought an up and coming rock band from Australia that were quite good.  They played, they stripped the stage of their equipment and then set the stage for the reason we were there.

They actually started early because Chicago residents had their panties in a bunch due to the potential noise on a school night.  Awe shucks, maybe we can all just wear headphones .. or you can move away from a multi-purpose baseball stadium.  Basically, they had to end the concert before 10pm.  I think this may have shortened their normal playing time, but they put in a solid 2 hrs of rocking that assuredly pleased every rock fan out there.  If you have not seen an AC/DC concert (your loss), think of it as a single purpose event – to rock your socks off.  They are not there to chit chat, talk about how great they are or even worse try to push whatever political or charity crap bands mistakenly think we give a shit about these days.  Nope, none of that.  Just come out and play their asses off until the show is over.

Unlike a lot of bands these days, this group knows why most of their fans are there – to once again enjoy hearing their favorite songs live.  As a result, they dabble in some of their newer stuff for those ticket holders out there that just “discovered” this band from recent radio activity.  For the rest of us, they devote 90% of the setlist to their classics.   Their stage is relatively simple by rock standards today (compared to like the Motley Crue tour we’ve seen a couple of times). They do have some classic props like the bell below..

… and the well known Rosie blowup (below) that clue you into the next song, but beyond that it’s standard rock lighting, a well traversed stage and 3 guys pounding out a rhythm while Angus shreds and Brian belts out the vocals. 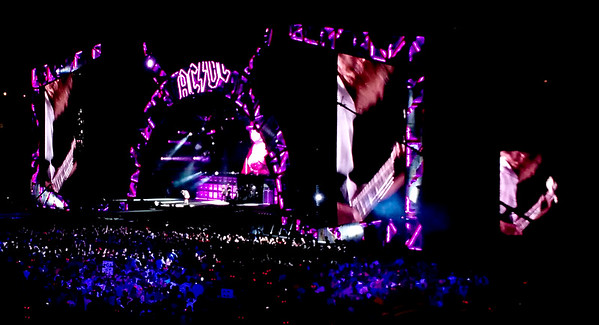 Linda did have the opportunity to see the core of the band in St. Louis with Malcolm and Phil.  Malcolm has since succumbed to dementia and Phil decided to pull his own dirty deed giving him the opportunity to gain new acquaintances in the Australia penal society.  I believe Malcolm was replaced by his nephew (Stevie) and they brought back a previous AC/DC drummer (Slade) to replace Phil. I was worried that they wouldn’t be able to carry that heart pounding beat legendary for AC/DC songs but that concern was quickly dismissed – they sounded awesome.  Angus is stick shredding it at 60 going on 20.  Relentless is the word I use to describe Angus.  No rests in the set although he and the drummer do give the rest of the band a nice break while he solo’s for like 12 minutes.  Linda did notice that Angus does shed more and more sweat dripping clothes as the show goes on.  In St. Louis he ended up in his boxer shorts and even mooned us at one point.  He kept it tame for the kiddies this go around.  Brian is having to work harder to get the vocals out, but he did just fine in my book.. plus it was an outdoor concert so it didn’t need to be crisp. 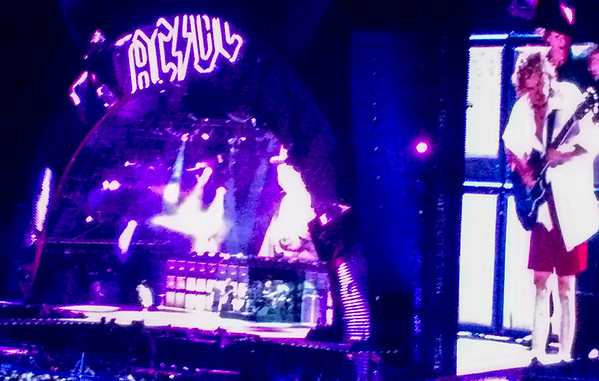 Finally the main set came to a close with a basic but heartfelt thank you and they simply walked off the stage.  This brought the crowd into a frenzy – and entire sold out Wrigley Field crowd appreciative of what they got, but demanding more… and more we got.  They started with Highway to Hell and then brought the cannons out for their traditional ending.  They provided a preconcert warning they pyrotechnics were being used for the newbs.  They started out with a few, but this year they brought out 9 cannons to salute For Those About to Rock.  My poor cell phone was blinded at this point. 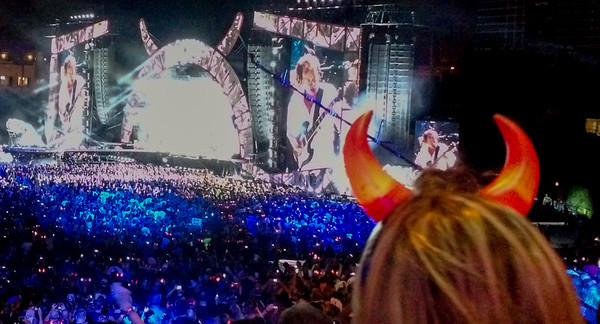 The crowd was totally wild by this time capping a perfect Chicago night.  They even added some surprise fireworks to put the cherry on top.  This is likely the catalyst for the 15-20 noise complaints.  It ended two minutes to 10:00, take a chill pill – wonder if they got the same number of complaints when the Hawks won the Stanley Cup?  Then again, it is Wrigley Field so most people have not heard any celebration coming out of that field hehehe.

Just a couple of quick observations.  First off, did you notice all the red dots in the crowd?  Those were the $15 devil horns they were selling – you can see them up close in the shot above.  I chuckle a bit since they all wear them on top of their head, but Angus always wears them on his forehead.  That haul alone would pay for the entire night’s affair.   Guys and gals alike were wearing them including the guy next to me.. the guy that kept high giving me and talking to me.  Not my favorite thing to do but he ended up being nice enough and just having a great time like everyone else.  He was from Wisconsin but a Cub fan so jumped at the chance to see his favorite band at his favorite ballpark.  The drunk made it through the concert although she fell across the seats at least twice and kept climbing up into empty seats to dance.  The crowd ended up standing the entire concert so it wasn’t an issue.  Linda ended up texting to her Facebook friends that stated “public service announcement for the ladies that if the last time you saw AC/DC was thirty years ago, you need to wear a bra this time”.  I’ll let your imagination take it from there – and she was dead on correct – eyes burning.

As a summary, we had a great time.  AC/DC didn’t disappoint, the weather was great and a simple walk back to the hotel made it a stress free event.  A great way to celebrate the day of our 26th dating anniversary, our 25th engagement anniversary (I purposely lined those up) and to save you the math problem, our 24th and some change wedding anniversary.  We had other people try to take our pictures but those all turned out crap so had to go with a selfie. 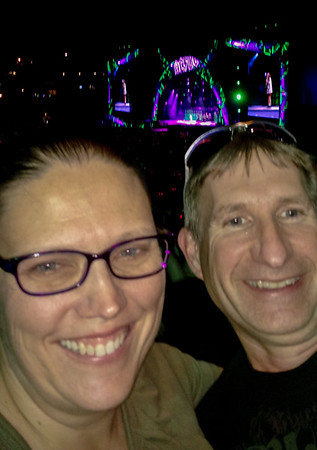 Lucky for us, they were filming that night for a DVD so we’ll be able to enjoy this night for years to come once that is released.  For reference, I did find the set list for the night.

Rock or Bust
Shoot to Thrill
Hell Ain’t a Bad Place to Be
Back in Black
Play Ball
Dirty Deeds Done Dirt Cheap
Thunderstruck
High Voltage
Rock ‘n’ Roll Train
Hells Bells
Baptism by Fire
You Shook Me All Night Long
Sin City
Shot Down in Flames
Have a Drink on Me
T.N.T.
Whole Lotta Rosie
Let There Be Rock
Encore:
Highway to Hell
For Those About to Rock (We Salute You)

AC/DC, we salute you.