So, I’m back with another less than crispy post.  Well, actually the last two are far from stellar.  This one from the Denver Botanical Gardens isn’t too bad but I probably could have taken a little more sheen off of it in the digital darkroom. 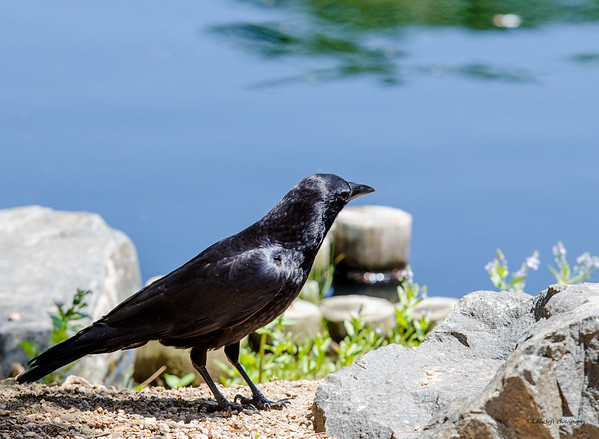 If you are not familiar with this particular bird you have probably been living under a rock.  With the exception of Central America and some shoots up into the Western states, this bird pretty much has North America covered.   The intriguing thing about this particular species is their well practiced ability to prevent me from getting a picture of them.  With the exception of the Botanical Gardens above, this bird has managed to evade my glass at every turn.  I’ll try sneaking up on them and they’ll spot me somehow and tear out of the area along with all their friends.  This will cause such a racket with their squawking that all the other birds in the area will take flight as well.  Every once in awhile one will fly by insuring that they are between my glass in the sun essentially torching the shot.  They also appear to have some allies in the field. 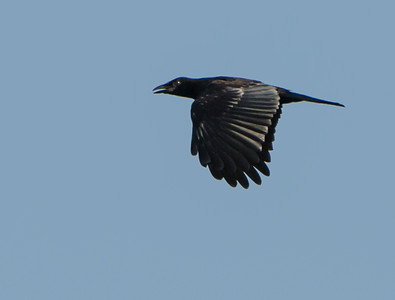 Twice I’ve had the perfect opportunity to take beautiful pictures of them.  The first time I was with my brother heading to Allerton park to go birding.  As we were going down the entrance lane there were at least two American Crows sitting in perfect light 10 or 20 feet off the road.  I immediately announced the presence of that bird and my need to still get in the tin.  At the same time I was bringing The Beast up to get a bead on them as soon as the car would come to a stop… only problem is the car never came to a stop.  There is a theory out there that the car might have even sped up.  Before the glass made it to my eye those Crows were a spot on the horizon.  Has it been mentioned on this blog yet just how competitive my brother is!?!  Their other accomplice is Linda.  Once again we were driving by some Crows in perfect light.  Think I used our special code word for “stop the vehicle immediately, there’s something cool to photograph”.  Clearly that is too much to get out before the moment passes so we have a special one word code (which will not be revealed because of the nature of it – not for the kiddies or easily offended).  Out came the word and once again prepping the glass to get the shot.  Well, that was the plan but once again the CAR DID NOT STOP.  Just kept going in complete contradiction to the coded expectations.  Sure enough the Crows decided to move on to better grounds leaving me empty handed once again.  For the record, Linda’s comment was “It’s just a Crow”.  “Yes, I am fully aware of that but I do not have one in the tin yet!”  Sigh.  Luckily a few flew by while birding at Emiquon National Wildlife Refuge.  Not the best shots in the world but enough to count it – thinking we might have to amend our birding rules a bit.  This “no count without a post” is putting some serious stress on me – meanwhile Mr. Competitive is racking up +1’s after +1’s. 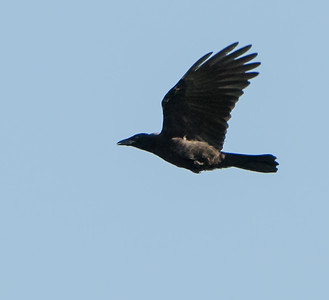 Guess I better get to some quick facts.  My apologies for the short post.  You already know how clever they are from the information above, but they are a very intelligent bird.  They are actually quite deft at problem solving and have the rare ability to figure out clever ways to get access to their food.  They are also fairly aggressive birds having no hesitation to drive larger birds from their area – this includes Hawks, Herons and even Owls according to Cornell’s website.  Crows do not breed until at least 2 yrs old and more often in the 4 year range.  They share social responsibilities helping their parents to raise their young.  I was surprise to see they really are not much of a carrion bird.  Seems like I’m always seeing them in the middle of the road holding vigil over some dead form or another.  Apparently this is due to a wimpy bill that can’t even break through the skin of small animals requiring them to rely on other more skilled hunters to open the skin up or wait until it decomposes enough to get that large, but apparently useless beak into the juicy parts.  And my favorite fact about the American Crow.  A gathering of Crows is considered a “murder of Crows”.  There appears to be a number of different explanations of this naming.  One being that there is a folktale that Crows will gather and collectively decide the fate of another Crow – sounds similar to Obamacare death panels.  Another reason is again their scavenger inclination – basically people often see them next to dead things and may associate it with the explanation they did the dirty deed themselves.  Then, of course, there are movies like Hitchcock’s The Birds that managed to collectively give all black birds a bad rap – pretty sure that was a mixture of Crows and Ravens, but it has been awhile since I saw that particular horror.  I will say that “The Crow” is one of my favorite movies which again perpetuates the association with the dead.

Well, that’s a rap on the Crow.  Quick and easy for the count but tried to make it worth your read.  See ya’ all real soon now.

2 thoughts on “Something to Crow About”