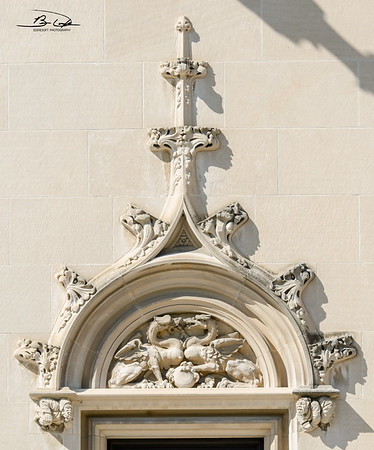 Once again, the large glass allowed me to reach those elements that may be overlooked on a casual visit.  Although not generally placed as high as the grotesques documented in the last post, the reliefs tend to blend in to the structures more and need that extra zoom to really appreciate the artwork involved. 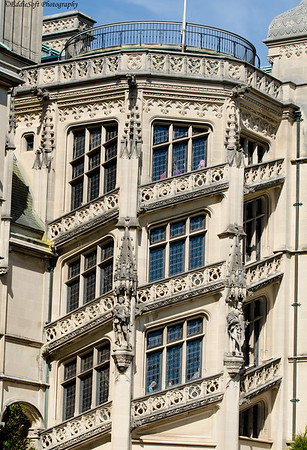 Case in point, the detail in the wall of windows with the faux balconies can distract the eye with all the angles and lines throughout the expanse.  The Beast was able to bring those details into better perspective revealing ornate figures standing guard for those wanting to expose themselves beyond the castle walls. 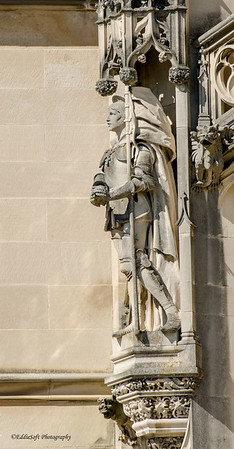 Gorgeous depictions of knights and kings that seem quite fitting for the ornate Biltmore mansion.  All looking as intact as the day they were installed – merely a bit weathered from their silent vigil through the many days and nights since the construction days between 1889-1895.  It is a shame the now compromised Wikipedia doesn’t provide additional detail on these architecture elements (probably too busy rewriting history on their political pages).

Did a little bit of research and did learn these are depictions of Saint Louis and Joan of Arc.  There are plenty more relief elements on the mansion itself, but want to move onto the grounds.  Like the mansion, no expense was spared in the surrounding landscapes.  There are large statues placed in prominent locations throughout with a large concentration in the flower/greenery gardens to the side of the estate. 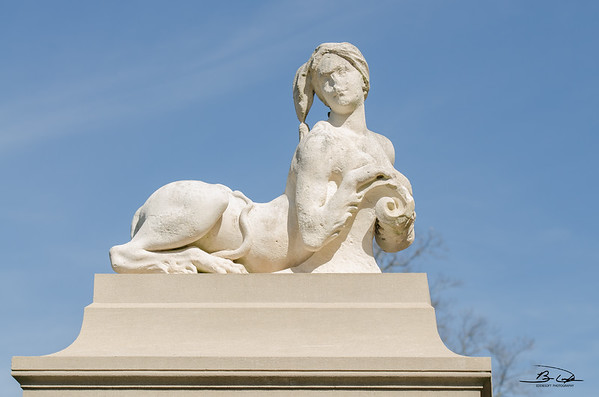 These elements can be seen easily with the naked eye – actually a pain to get them in the tin with the big glass as I had to keep stepping farther and farther away to get the complete statue in the frame – all while trying to be super careful not to disturb the landscapes.  These two entrance statues reminded me of female Sphinxes or land Sirens) 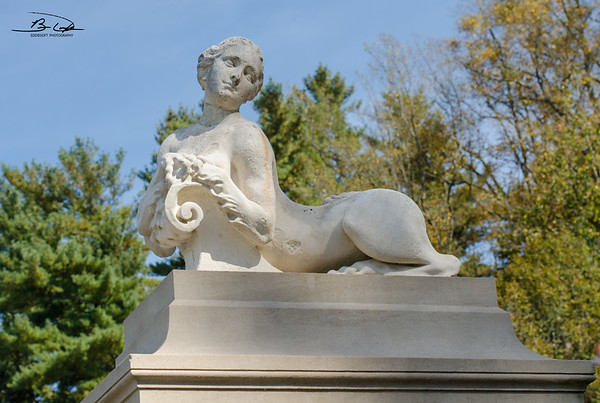 As you move into the garden/hedge area, you are greeted with a series of statues.  Richard Morris Hunt was the primary architect for Biltmore and acquired many of these statues from France and Italy around the time of the construction. 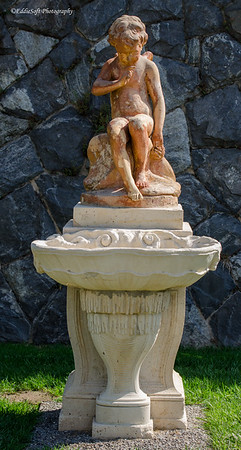 As you walk along you are greeted with various cherubs positioned at crosswalk intersections.  All are brilliant white with the exception of the rufous colored one above. 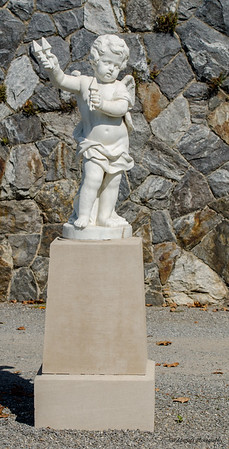 Smaller glass would have come in handy here.  Luckily there wasn’t a lot of people about allowing me to shoot across the walking area without having to wait for a gap in other admirers.

The Cherubs have had some noticeable work done on them over the years.  It is possible that the original version below had a missing arm, however, the sister statues seemed to be complete. 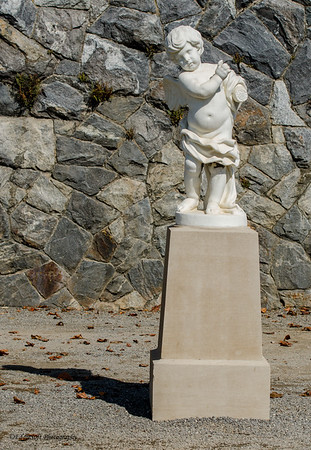 Especially relative to the detail evident in the following art piece.  Quite stunning and always brings a great appreciation for the talent of the artists whenever I see incredible pieces like this.

Think I managed to capture all of the cherub series. 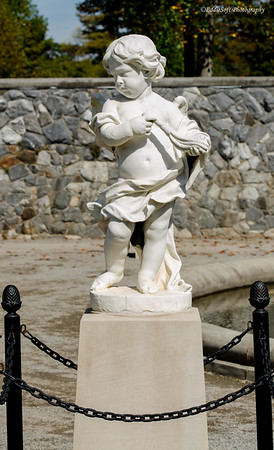 This shot gives a feel for the spacing between the other statues.  If I remember correctly, this is the only one that had the fencing around it – may be wrong there although didn’t see them in any of my other shots.

Not to be left out, George Vanderbilt rounded out his collection with older males as well.  Less of these for sure (and not just in clothing ha). 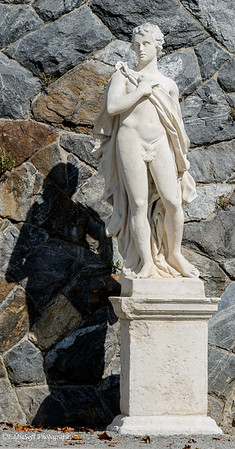 Poor guys standing out in the cold with just a grape leaf protecting his modesty. 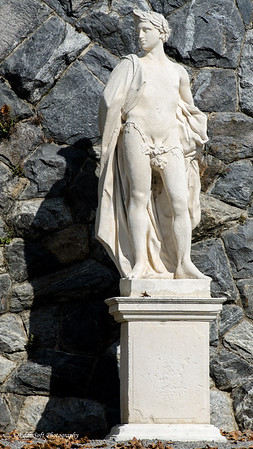 If you happen to visit Biltmore, be sure and walk up the hill at the back part of the estate facing the mansion.  Not only will you have a great view of the entire structure, but you will also find additional ornamentation on top of the hill.  Appears there was an event planned for later in the day as there was a huge tent set up back there which made for a poor backdrop to the large statue found there. 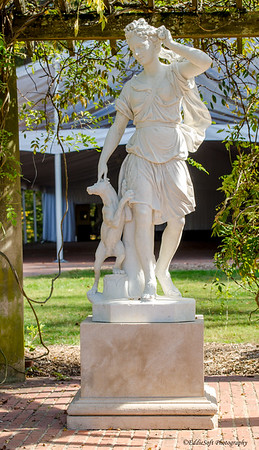 Worked the scene a bit until I found an angle without the tent that still showed some detail in the artwork.  Did clip the view of the dog more noticeable in the shot above.

Coming back to the more relief form of artwork, there are several water features tucked away on the grounds.  This ornate koi/dragon fish water fountain was built into the retaining wall.

This turtle water fountain was a bit scary – not sure if it was the facial expression or the fact that water was pouring out its mouth that put me on alert.

Let’s get you in a bit closer. 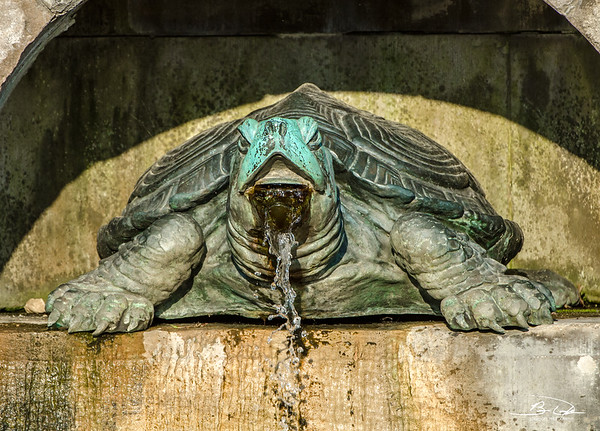 I’d be cranky too if someone used me for a water funnel.  I could probably spend multiple days there just exploring the amazing detail – kinda my thing – especially when money was not a factor.  Everywhere you look some detail missed on the previous visit. 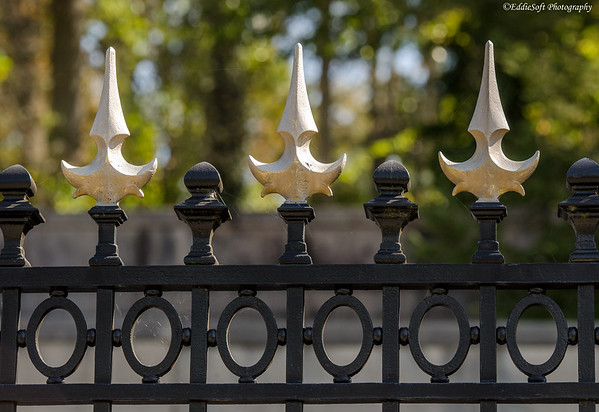 Hope you enjoyed a quick run through some of the architectural elements we discovered on our last trip there.  About time for us to make another visit.  As mentioned in part one of this post, probably pass on the mansion tour and instead spend more time exploring the grounds – oh, we will definitely hit the winery again.

Looking forward to those warmer days.

One thought on “Stone Cold”