Guess there is no time like the present to get some loose ends wrapped up before hopefully getting back into the upcoming racing season.  I’ve had a note on my desk for almost a year now to get this race post out.  Through part procrastination and part denial I bring you a post on last year’s race season.  Hell, this post represents the ENTIRE 2020 race season. 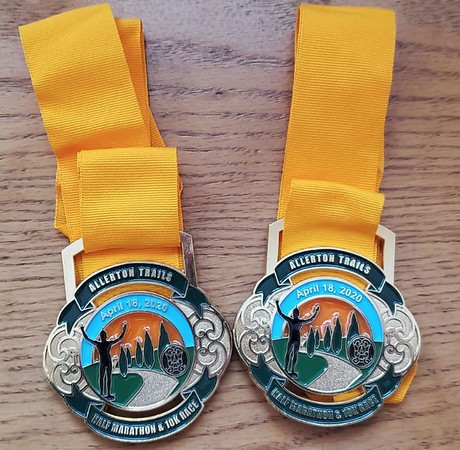 Hit the jump for the race recap – albeit late this year.

Covid managed to completely decimate all but one of my race plans.  This included my redemption race to erase the only blemish on my record since embarking on this crazy hobby all those  years ago (link here).  If you know me, you know that failure grates on me and 2020 was the chance to conquer that bastard Heat Miser race.  That was the plan until race after race was canceled.  Many of them offering virtual alternatives.  Like the year before, the first race of the season was scheduled to be the Allerton Trail races in Monticello, IL.  An incredible venue as you wind your way through the Allerton grounds (link here). The race organizers are also top notch putting on a race for the equally fantastic  Make A Wish foundation.  This is set up to be a two race event – a night Trail-Glo 5K followed by a 1/2 marathon trail race the next morning.  I had already paid my entry fees when the Monster from the East started making its way over.  Keeping an eye on the status, I continued the training plan to hit the April race date.  Unfortunately, injured my back a bit which made the training even harder than usual.

Then the dagger came – the physical Allerton event had to be canceled for safety reasons.  The organizers were gracious to offer multiple options – receive a full refund, receive a partial refund and donate part to Make a Wish or simply run a virtual race equivalent and earn your medal while supporting in full the Make a Wish foundation.  That was the easiest and quickest decision of the year – virtual it is!  Problem was picking a suitable course that kept the spirit of the race.  Most of my trail courses were still too wet and didn’t want to risk tweaking the back with a slip or complete wipe out.  Decided to stick with the country roads around my house.  Wow, did I underestimate the amount of hills that surround my house.  By mile 10 I was wondering what my name was.

I had completed parts of the course during various training runs, but never put it together until actual race day.  Not my best time for a half by any means, but with all the things going on at the time, pleased to make it through – even the back kept it together for the most part – a few hours later it let me know what it thought of the pounding it had just taken.

The race organizers asked for pictures from our virtual races.  Linda carried on her tradition of post race celebration pictures – the sign mentioned how much I had missed the Foo Dog Gardens finish the real race ends with.   As this was a two race event, my task was not completed.  Normally you start with the 5K night run where I opted to reverse that.  With the sketchy back it was important to make sure I could get through the long race and not risk ruining it on a measly 5K – if nothing else I could always walk the 5K if things went south the day before.

Keeping with the spirit of the race, waited until darkness fell before embarking on the second part of the race.  Suited up, donned my lighted arm band and headlight and set out in honor of the kids.  The actual race is significantly safer being on the trails and not on a dark country road.  Luckily there were only a few cars out and all of them moved over upon seeing my lights coming at them – now I know how deer feel.  Was under 9 minute mile pace until fumbling to get Runkeeper stopped at the end.

Again, a pretty slow pace for a short 5K – just happy to make it through without having any big issues beyond some tired legs from the day before.  Dragged Linda back out for the finisher picture.   There is no denying the excitement and joy that race day bring was damped by the virtual aspects.  Running may be a personal commitment to push yourself beyond the limits, but it is the camaraderie, the mutual admiration knowing what everyone goes through to toe the line and the encouragements along the way from absolute strangers that really put the cherry on top of this sport.  Let’s not forget the small contribution to an incredible organization – that is the part that puts the biggest smile on my face and the warmest feeling in the heart.

Hoping we can all be together for this year’s race!! Oh, and THANKS FOR NOTHING COVID – because of you there’s a big gap in my medal haul for 2020 and we medal whores don’t appreciate that one damn bit.

One thought on “Thanks for Nothing Covid”