Greetings everyone!!  As a tremendous surprise to myself, I’ve once again managed to survive the most stressful part of the year.  The regulars here are well aware that my year pretty much revolves around one event, a celebration dedicated to my favorite holiday – yep, the night of the Great Pumpkin.  Around here, we do it slightly different as we celebrate at the beginning of October and instead of one night, this year we opted for not one, not two, but three nights of epic spookiness.  In an effort to keep our guests as safe as possible, we extended the days to keep the numbers down each night, removed the food element to eliminate congestion points and set up the trail in a manner to maximize social distancing.  Another Halloween Haunted Trail is officially in the books!  All that is left is to finish putting away the items for next year and the all important rest to recoup the strain on the body.  Decided I would do a little resting first. 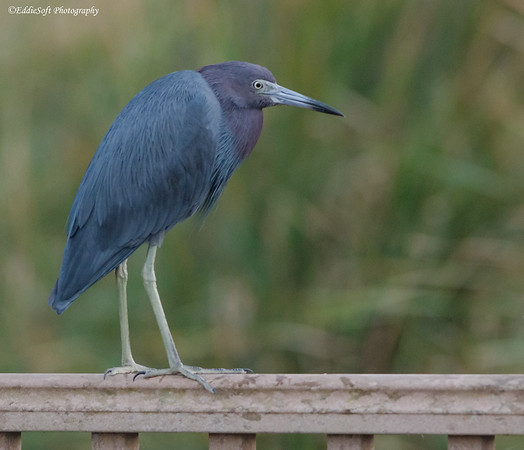 Going back to the Texas Gulf Coast for today’s featured feathered friend.  South Padre Island is one of our favorite winter destinations and looking forward to being able to spend some extra time down there towards the end of the year.  I need to hit the books and figure out what the target bird is going to be this year – early favorite is on the Groove-Billed Ani.  That bird has been tops on the list for the last three trips and each time came away with an empty tin.  The Chihuahuan Raven is mighty tempting as well and let’s not forget about the Mangrove Yellow Warbler… wait, did he say Mangrove Warbler… thought we already had tha…..shhhhhhh…. we promised to wait until Ron starts posting on the He Who Owes Me Bigly event. 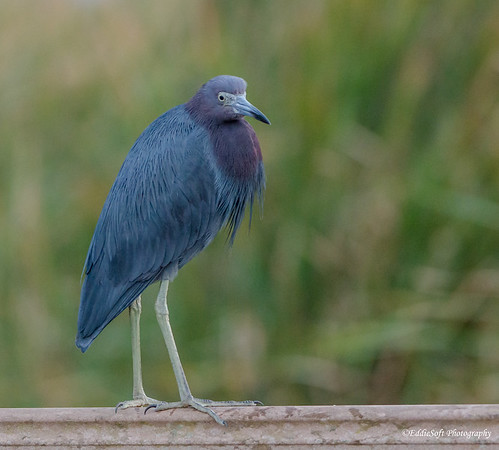 Hit the jump to see a few more pictures of their local comedian.

Back to the here and now, today’s specimen comes to us courtesy of the South Padre Island Bird Viewing and Nature Center.  There are few places to witness the Little Blue Heron in the US – mostly down in the southeastern region with an intriguing breeding bubble around South Dakota.  However, if you really want to leave zero doubt you will get one in the tin, head down to the boardwalks of SPI Nature Center.  There are few givens in the birding world, Geese will always leave their calling cards, birds will always attack Ron and there are Little Blue Herons on the SPI boardwalk railings. 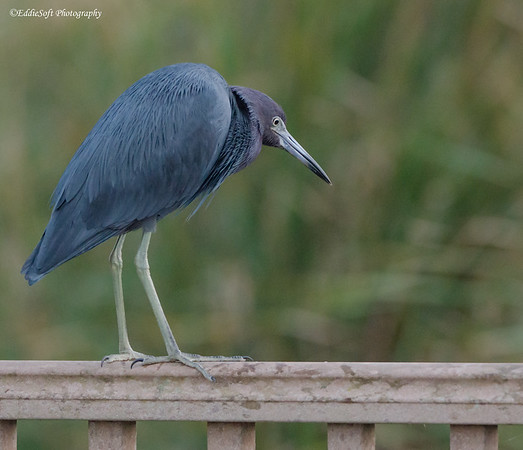 More impressive is how tolerant they are of people with long black barrels pointed at them.  These Blues will keep an eye on you, but allow you to get within several feet without spooking them.  This particular one was especially accommodating allowing me to get a variety of angles.  Was also fighting some lower lighting conditions with dropping sun and appreciated the extra time to get the exposure dialed in. 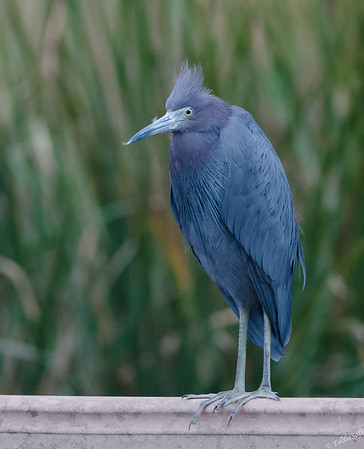 Quite the comedian, this Little Blue was busy showing off its impressions of other birds, like the Cardinal impersonation above.  His joke about the “Mallard walking into a bar and the bartender recommending next time it duck” had us all rolling in laughter on the boardwalk. Unfortunately, like all comedians these day, we heard our little entertainer fell victim to thin-skinned cancel culture and now spending its nights stocking the shelves at the local Walmart. 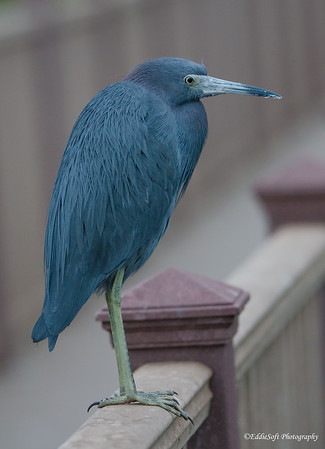 Yikes, out of pictures already.  Let’s see what kinds of interesting facts we can pass along about Little Boy Blue – or possibly girl as the adults look similar.  The juveniles on the other hand are primarily white with a bit of dark coloring on their wings tips. Look for the signature two-tone bill to help distinguish from the Egrets. Cornell’s site noted the lack of elaborate breeding plumes on this species saved them from the decimation felt by the other Egrets and Herons brought on by the fashion industry.  I need to do a bit more research on this (would it be too much for Cornell to elaborate a bit more on their cool facts!?!), as there is a blurb that indicated Snowy Egrets are not too fond of adult Little Blue Herons.  Apparently a bit thin skinned from the comedic ribbing of the Blues.  The fact that the immatures look similar to Snowies allows them to mingle unmolested amount the Snowy feeding zones.  Implies to me that Snowies are a bit blind – did I mention the two-toned bill? .. just saying.

Better leave it there.  Hope you enjoyed the quick post on a rather playful and calm shorebird.  Looking forward to going back to the boardwalk comedy club closer to the new year.  There are also rumors of another “He Who Owes Me Bigly” event in the works – maybe we’ll be able to get him to make a few posts before we allow him to participate this year…hehehe