Welcome to September ye’ all!  Against my best efforts, another page has fallen off the monthly calendar, which by the way is looking a bit thin these days.  Nearing the final quarter of 2020.  A year most of us will never forget.  Lost time, lost adventures, lost interactions with our families and more than anything, loss of our freedoms from political greed.  Quite sickening when it comes down to it and looking forward to putting it all past us.  We’ve decided to claw back a bit of civility and once again on the road enjoying a little end of the year camping (in another state with a better governor of course).  Temps are definitely starting to drop making for a perfect night to sit around the campfire and tap on the keys. 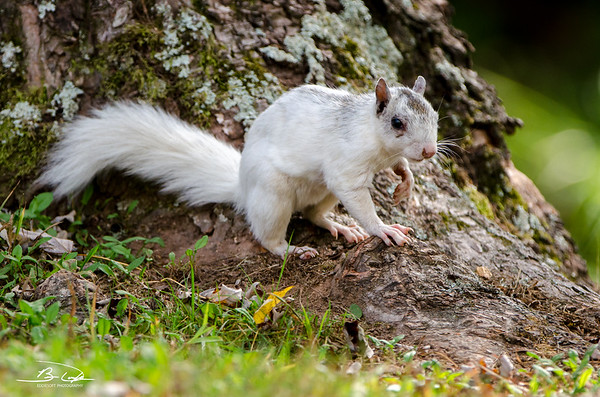 I wanted to actually get this post out in July during my “white” month.  Doubt anyone noticed, but all of the wildlife posts that month involved white in some manner either in the name or in featured animal’s color palette.  And you thought there was no method to this madness!  Today’s post would have fit in nicely with that theme – unfortunately, this one required a bit of research that I was unable to get to the entire month of July.  Bri’s a busy guy these days especially with the annual Haunted Trail a mere month away. 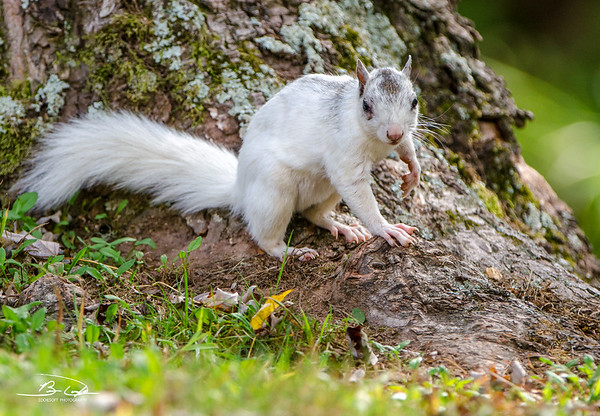 Hit the jump to learn more about our day observing the cutest white furballs you will ever see. 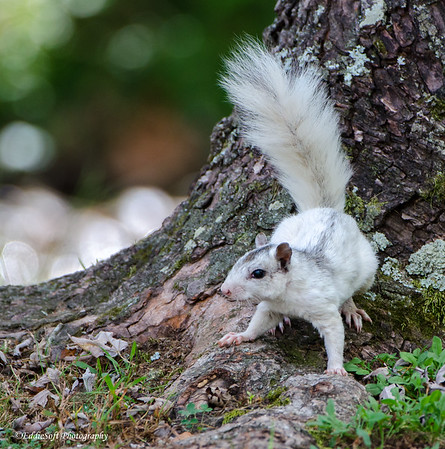 Then Linda and I took a vacation to North Carolina back in October 2016.  Yes, that is a ‘1’ and a ‘6’.  Some things are just better with age… like a fine whiskey.  On our way out there, we stopped in to visit Linda’s cousin Sandy who was recovering from a recent surgery.  She lives in North Carolina making it a perfect fit for our trip to Biltmore in Asheville.  Now, Sandy happens to live in the woods of Lake Toxaway and happened to have had a Bear on her porch just a few days before we got there – bummer, that would have made a good edition to the blog. 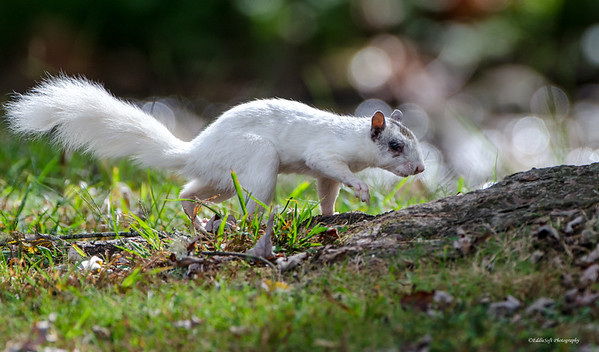 Although disappointed about the Bear opportunity, Sandy told us about some interesting squirrels that were down the road in Brevard, NC.  Specifically, they hang out on the campus of Brevard College, a private liberal arts college established in 1853.  I’d give you more details about the college, academia and experiential approach to teaching (whatever the hell that means), however, none of that matters… because … wait for it … wait for it… wait a bit more for it… they have a population of WHITE SQUIRRELS!! 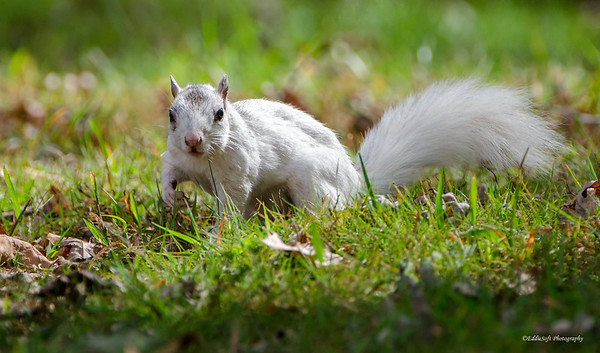 I could hardly contain my excitement and Linda knew immediately this had been added to our itinerary.  After our nice visit with Sandy, we took some pictures to remember the moment and then jumped in the car to go see us some White Squirrels.  We ended up finding the college without difficulty.  Pretty nice campus, however, when you are used to the sprawling University of Illinois campus, this one was … how do I put … we’ll go with dinky.  I did go back and check out of curiosity – guess you do not need that much space for a mere 767 students.  I think I had that many students in a single physics class. 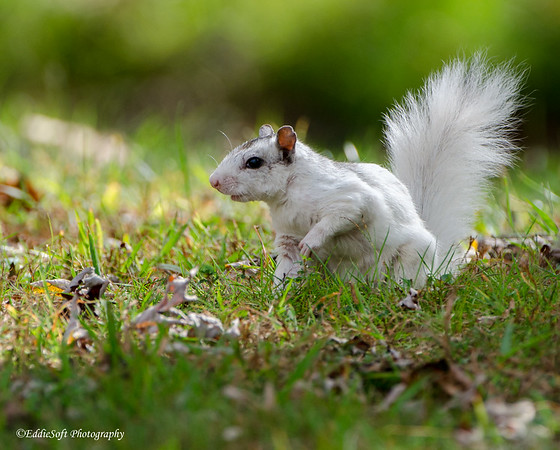 So, we took a drive through the campus which I will admit was very park like.  In our first pass we didn’t see a single Squirrel red, grey, black, much less a white one.  Hmmm, now that was a bit discouraging.  Undeterred, we decided to take another pass.  Maybe these Whites are tired of all the attention and have some kind of bat signal when a vehicle with out of state plates comes trolling through.  Eventually made our way to their gym where one of their sports teams was unloading from buses.  In case you are wondering, their team name is the Tornadoes.  What the hell, how could they not go with the White Squirrels.  “Hey Hey, we’re the White Squirrels and we’re going to kick your butts and take your nuts!” 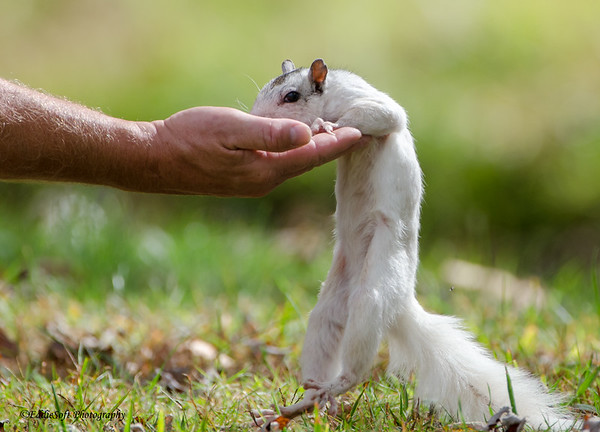 One of the coaches ended up walking over to the grass near where we had temporarily parked to figure out our plan of attack.  Curious, I watched the coach put what looked like some peanuts in has hand and started making some calling sounds.  Now this was interesting.  He did this for a few minutes before out popped none other than a White Squirrel.  Ii walked over to the coach who had bent down and extended his hand out towards the Squirrel. 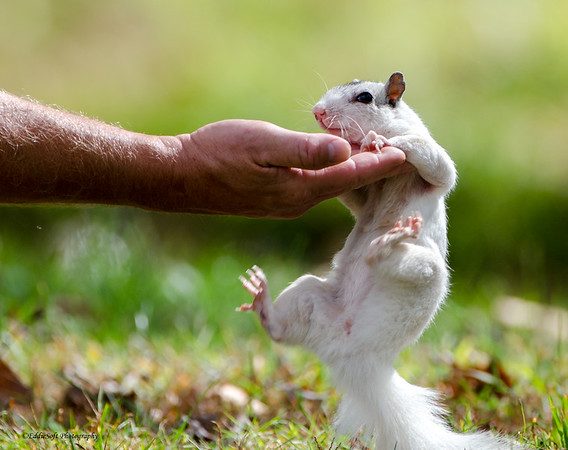 Not sure what was going to happen next, I grabbed the camera, quietly exited the car and took up a position where I could watch the action but far enough away that I wouldn’t alarm it with the big glass.  That Squirrel, walked directly up to the outstretched hand, reached up and climbed atop to consume the offered food. 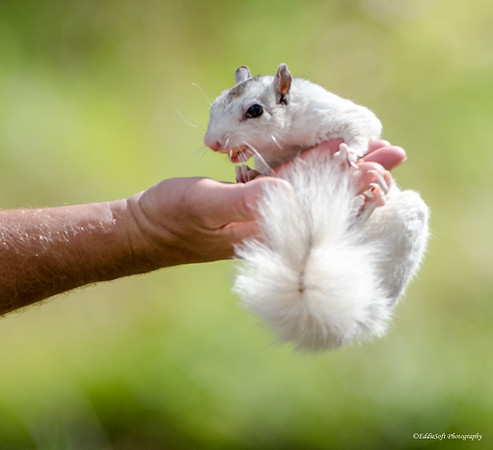 It was absolutely amazing to watch.  This Squirrel was obviously used to this individual and completely trusted it, showing no concerns at all.  Even when the food was consumed it stayed on the coach’s hand content to enjoy the companionship.  A stark contrast to when my college roommate offered a nut to a Grey Squirrel hanging out on the quad. That one also walked up to his hand and then promptly BIT IT, hanging on for dear life as he swung in circles trying to get the damn thing to let go  Eventually it released, scooped up the nut that was dropped on the ground during the hysterics and promptly climbed up in a tree and ate it.  I can’t say I’ve ever laughed harder. 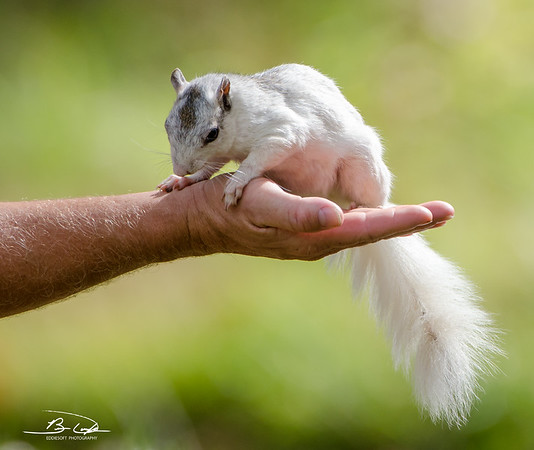 Eventually the coach lowered his hand and the Squirrel slowly left to head back to the trees.  Clearly this scenario has played out several times through the course of the year – man and nature had forged a friendship.  I was a bit jealous and thought that would be something fun to do… then I remembered the evil Illini Squirrel and decided I was better off behind the camera.  The key part in all of this .. I had me a White Squirrel to add to my wildlife collection and, of course,  to feature on the blog, yeah!  We ended up seeing several more of the Squirrels as we drove around.  There were three of them hanging out in a grassy area near some woods.  These latter shots are of them. 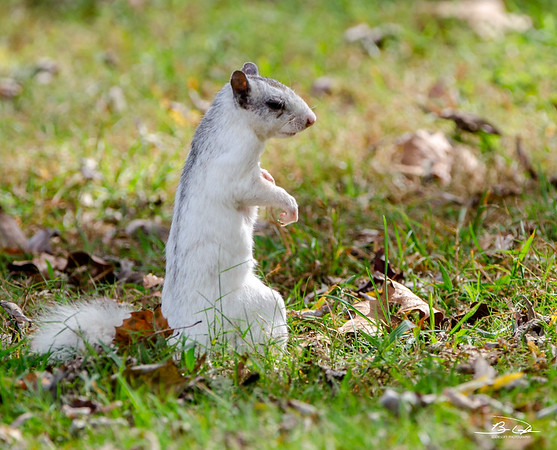 The shot above gives a good visual of the black stripe down their backs that matches their cap and darkening around their eyes – darkness of the color seems to vary between the species from all white to the darker versions here.  Actually, definitely take note of their black eyes.  Some of you might have been thinking these were shots of an albino (which would be devoid of the color and usually pink eyes), nor is it truly leucistic which do tend to keep the black eyes but would be white elsewhere.  Nope, this is just a white Squirrel and word had it they get defensive if you imply otherwise.  “Hey, what did you call me?  You, over there in the pink skin.  Don’t make me bring out my can of whoopass, cuz, I’ll kick your butt and take your nuts!!” 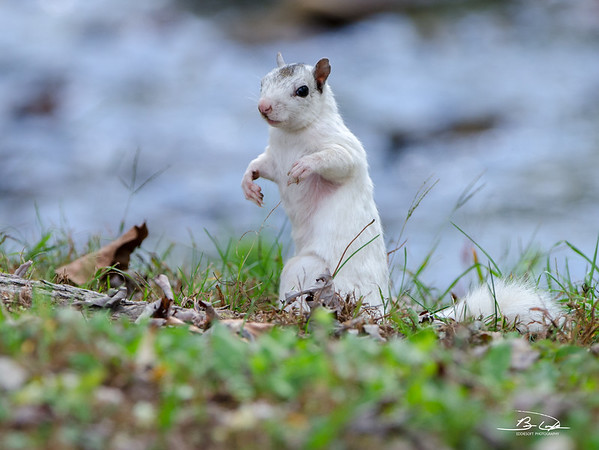 Okay, you’ve waded through the shoot details, now time to give you the fruits of my research.  So how did these White Squirrels come to be in Brevard College, NC.  First off, for the record, their Wikipedia page doesn’t mention anything about these cute treasures – not a damn thing!  If I was running their PR, I’d have that plastered everywhere – I’d also change their team name.  As a side, note, my high school name was the Cyclones which always made me chuckle as it was in the heart of the Midwest.  So, these Squirrels are actually Eastern Grey Squirrels with a mutation in their genes that results in their coats being predominantly white. 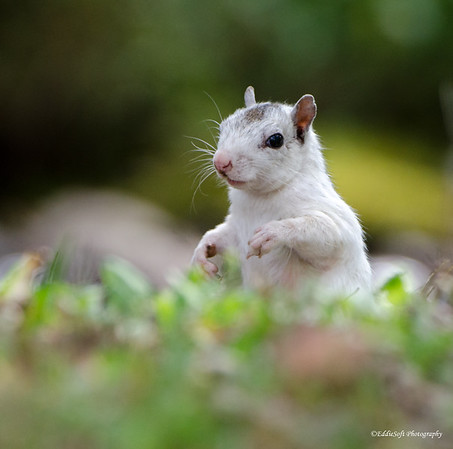 There are a few variations in the story and not certain how much is legend versus truth, however, there is definitely consistency in that they originated from a carnival animal truck that had overturned in Madison, Florida around 1949. Per the Transylvania Times, an individual managed to catch a pair who gave them to his brother-in-law in Brevard, who in turn gave them to his niece who tried unsuccessfully to breed them.  Eventually they escaped into the wild and started breeding.  In 1986, the city council established a sanctuary for the Squirrels making it unlawful to harm or take any of them.  Jump to 2020 and you can now virtually adopt one of these white furballs from the White Squirrel Institute (link here).  I must say, their website is very nice complete with interactive location map.

Time to call it a post.  Hope you enjoyed seeing and reading about the White Squirrel.  Big thanks to Cousin Sandy who told us about them!  We definitely need to find time to get back together and visit again.