29 years ago today, I officially gave up my single and carefree status and joined the woman I fell in love with at the alter (rumors that she was kicking and screaming the entire way are assuredly false).   Never looked back and still the best decision I’ve ever made.  Although giving up my steady diet of microwave macaroni and cheese dinners was a struggle, but I’m sure for the best ha.  Unfortunately, I didn’t find anything in the photo queue that worked well with the anniversary theme.  I guess in honor of the white roses I gave Linda that day we’ll go with this. 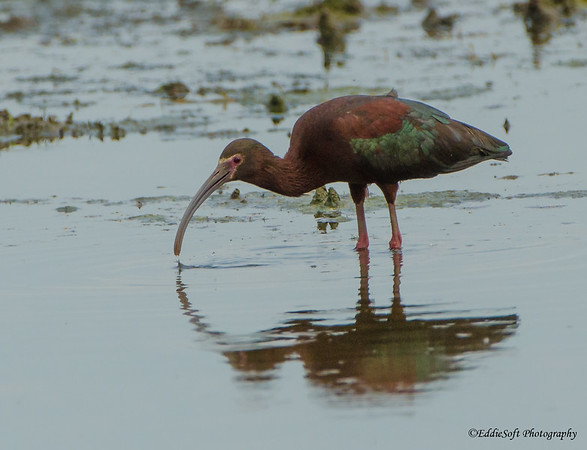 A bit of a stretch, but in case you are not familiar with our bronzed beauty above, it is a White-Faced Ibis.  Probably should have gone with the more fitting White Ibis – of course, that bird I already have checked off my list where the White-Faced Ibis is officially a new bird to the blog.  This particular specimen comes courtesy of a trip to down to Havana, IL back in May 2018.  The reported sighting of this particular bird was the reason for the trip down to Emiquon National Wildlife Refuge (located just outside Havana). 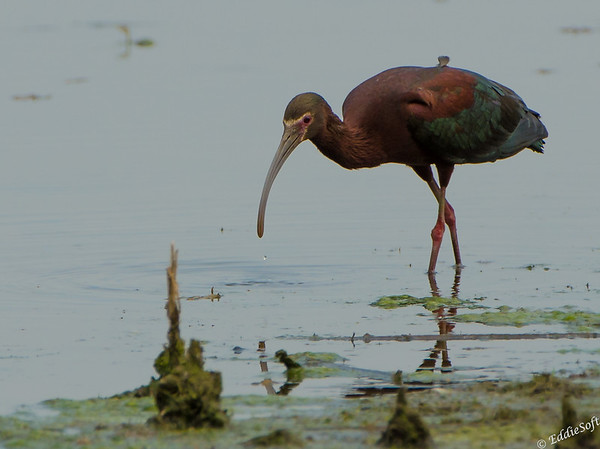 Hit the jump to read a bit more about our bronzed bird.

Oddly enough, I probably already had one of these White-Faced Ibises already in the tin thanks to several trips down to Texas.  Hard to throw a rock and not hit one out along the Gulf Coast (Note, the Lifeintrigued lawyers mandated that I clarify that was just an expression and no individual along on any of the Texas birding trips was actually throwing rocks at birds – not even Ron, but then again I STILL cannot talk about anything that might imply Ron went birding in Texas. 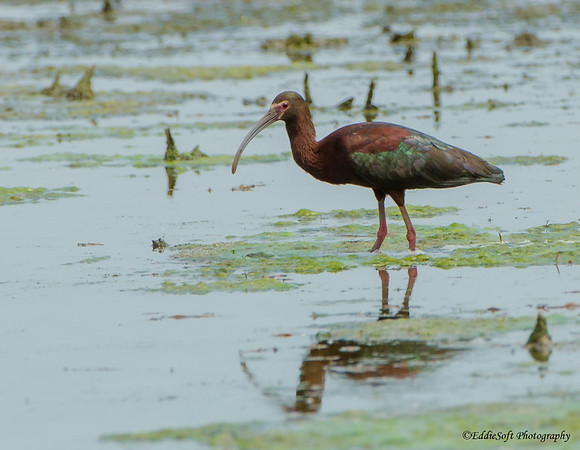 The problem is trying to correctly identify the White-Faced from the Glossy outside of breeding time.  Harder yet is trying to distinguish the juvenile version of those two species.  If you have the right angle you might be able to tell from their eyes as the Glossy (link here) has a dark eye where the White-Faced featured here sport the red eye.  Again, tough to really tell in the field unless conditions are right.

The adults both possess that dominate rust coloring with highlights of bronze, emerald and some purple hues as well – although those purples are often hard to really capture unless you get the sun to help you out.  I amped a few of these shots up just to give you a feel for what they look like in good light.  They always appear a lot duller in person and straight from the tin 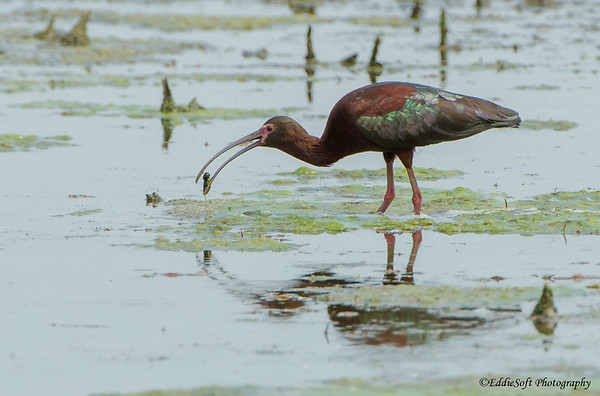 The good news is if you can get them during breeding season their distinguishing features stand out a bit more.  Outside of the actual eye coloring, if you look around the eye the White-Faced will have a white border – yes, thankfully a name that helps out when trying to ID in the field.  The Glossy will not have the white coloring, rather a lighter blue one that doesn’t go all the way around the eye. 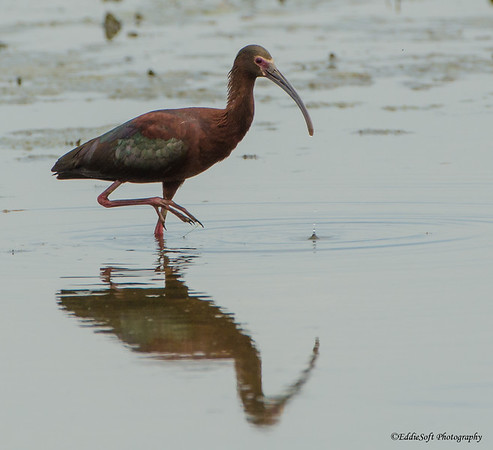 White-Faced also have a pinkish spot between the eye and the bill which is absent on the Glossy.  Without having good shots of these distinguishing features, I didn’t feel comfortable taking the official check.  Thanks to the Emiquon trip, that has been resolved and as you can tell from the provided shots each of those are clearly visible and thus the official check – hurray! 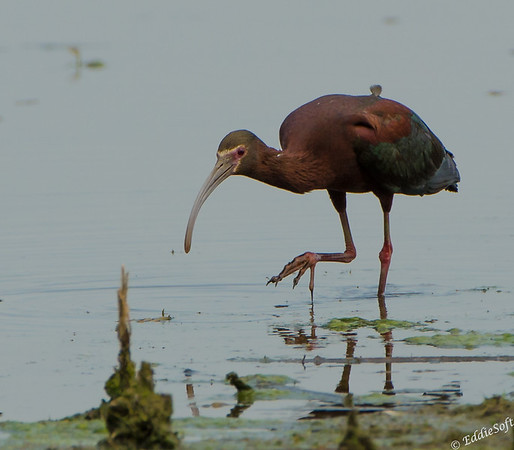 If you recall from the last post, I was such a good brother that I essentially handed Ron his Snowy Owl check mark.  I am pretty sure I did the exact same thing with this particular bird.  I’ll give Ron credit for seeing the sighting, however, pretty sure I am the one who pointed it out to him in the marsh.  Either way, I’m going to take credit for it as it was in my backyard.  Just glad it was still there after he made the trip all the way down from Chicago.  I’d hate for someone to have to travel all that way and then go home empty handed … like say a Ross’ Goose.. just saying hehehe.

We only spotted one specimen that day.  Not entirely sure why it was even there beyond the fact it was Emiquon and that place has a knack for drawing interesting birds into the area.  It happens to sit in a major migration corridor and every once in a while we get some fallout.  The interesting thing about this particular species is it really doesn’t belong here at all – even from a migration perspective.  They travel north during the breeding months which really just takes them to the middle of the west half of the US and a small band up into Montana.  Their migration path back down to the Gulf Coast and Central America doesn’t even cut through Illinois. Odd indeed, but thankful our large nosed friend stopped in for a visit.

It was definitely annoyed by our abundance of mosquitoes and such patrolling the wetlands.  It would walk around probing deep into the marsh, pull out and poke in a nearby space and then take time out to rid itself of whatever pesky creature was annoying the hell out it.  This became such a consistent scenario, that I was able to essentially predict when it was going to happen.  Even with that signal, it was work to get that scratching shot in the tin.  Their long legs and freakishly long toes are intriguing and wanted to get at least one shot so my readers could enjoy it.  Hard to really tell how long their legs are and much less the size of their feet as they spend the day wading in the deeper areas of the marsh.  A definite advantage over the other shorebirds not having to fight with them for food in the shallower waters. 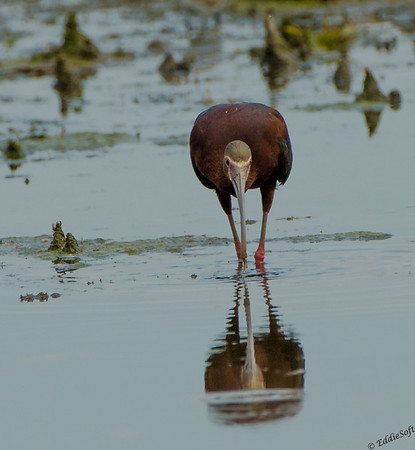 Also wanted to get a good angle of the white outline from the front.  Looks almost like a Cylon from Battle Star Galactica – I might be dating myself with that one.  Might as well give you the other angle as well.  This is one of the shots I amped up a bit to give you a feel for the coloring that is typically lost in lower lighting.

Oh crap, almost out of pictures.  As this is officially a new bird, better get to some fun facts to leave you with in appreciation for your precious time.  Let’s see what Cornell’s website can enlighten us about this impressively large bird.  Umm, well, uhhh, eesh – they don’t have crap on this bird in the Cool Facts department.  What the hell people, inquiry minds want to know, get your student’s butts out in the field and bring us something we can use to pick up woman at bars with.  Wait….I started this post about my anniversary and giving that life up…. then again, bird lines never seemed to really impress anyone at the bars anyway.  “If you think my nose is large, you should see the Ibis’… wait, wait, where are you going!”  Again, marriage was a great decision on my part.  Before you ask, no, I did not win Linda over with my bird pickup lines – pretty sure it was my amazing solid modeling programming skilz, but you will have to ask Linda to confirm that. 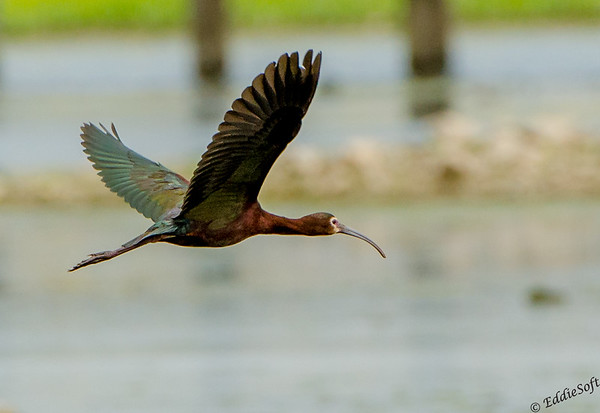 Sorry again, for the lack of interesting facts.  I’ll put a bow on this post and get back to enjoying the day with Linda.  As an FYI, the white roses thing on our wedding night has been an ongoing joke for 29 years.  She basically ignored them and initially even refused to take them with us when we left.  Some has some lame excuse like she thought they were put there by the B&B owners – I still like to bring it up for old time sake ha.