Well, somehow July managed to sneak up on me.. like the month before and the month before that and the month before.. you get the picture.  Absolutely stunning how fast things seem to be moving in the midst of a supposed lockdown.  It has been a few days..err weeks since my last post thanks to a little annoyance called lack of Internet.  With all the joys country living brings, there are a few downsides.  One is water – I kid that H2O is as good as currency around here.  Luckily that was pretty much solved when we put in a second well last year.  The other downside is Internet connectivity.  This has yet to be solved adequately and it has been steadily decreasing in quality for the last couple of months – doesn’t help that usage has gone up with all the Covid-19 crap.  Just so happens both my wife and I have 30+ years each in IT and to top it off Linda started out as a network specialist.  Problem is she is having to deal with support personnel fresh out of kindergarten.  If they tell her one more time to unplug her router or press the reset button I think she’s going to reach through the phone line and choke them to death.  Not sure when this battle is going to get resolved, but right now access is pretty spotty limiting my posts and more importantly the chance to read everyone else’s posts.  My apologies in advance for delayed responses and lack of commenting on my blogger friends’ sites.  Meanwhile I get to sit her and watch Linda’s eyes get redder and redder … oh shit, they just asked her to unplug the router again #$!@$#%!@%.  Today’s featured feathered friend is in honor of Linda’s eyes that are getting redder and redder each time I look over. 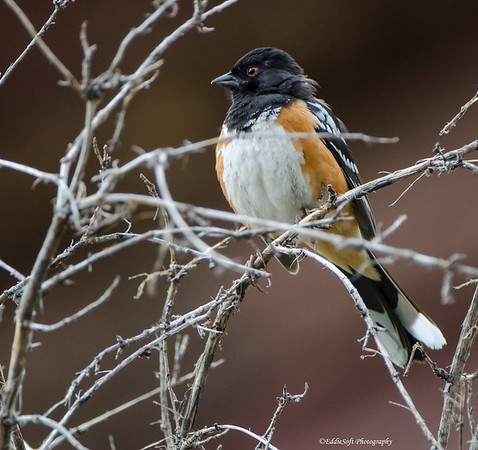 I can only guess that this Spotted Towhee is also having trouble getting connected to the Internet.  Pretty soon it is going to breakdown and leave the woods in search of a local coffee shop for some free Wi-Fi.  Not an easy task as this specimen was found on our trip out to Colorado a little under one dog year from today.  For those new to the blog I’ve switched to dog years as that sounds a lot better than human years – May 2014 feels like I’ve been trapped on a desolate island with just a volleyball to keep me company.  An interesting parallel to how desolate I feel right now not being able to share strings of 1 and 0’s with the rest of the world   “Is there anybody out there .. Mother should I build the wall”. 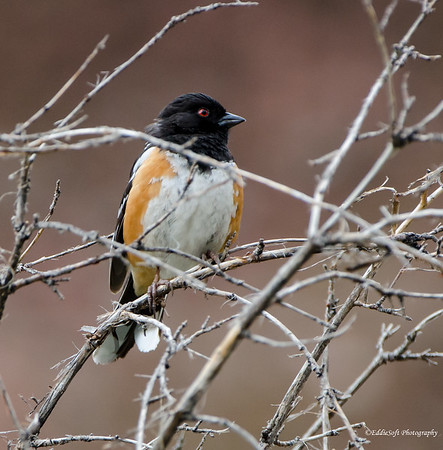 Hit the jump to read a bit more about our red-eyed friend!

Specifically, our red-eyed Sparrow was spotted in Rocky Mountain National Park.  In my parts of the woods, we only have the Eastern variety. Similar from afar, as the males both sport a black hood which washes down the back and through the wings and tail.  Both sport the rust our rufous sides and extremely bright white belly and yes, they both sport the obligatory IT help line red eyes.  There distinction lies in the white details on their wings.  Where the Eastern sports a few white splotches more akin to careless painting, the western variety pictured here have more consistent white marks that lend itself to the Spotted Towhee moniker.  I should also point out the two very large white patches underneath and at the end of the tail.  That is the feature I tend to notice first as they flash by. 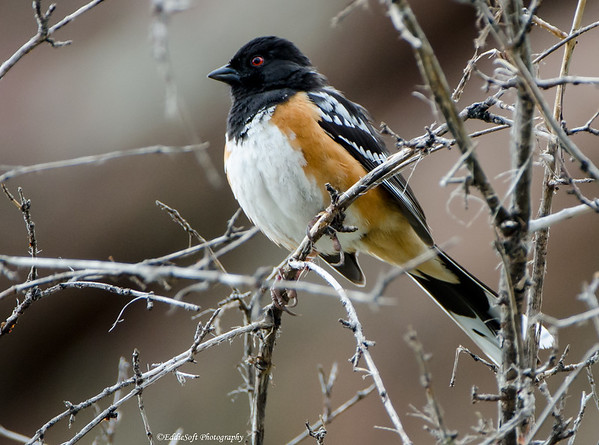 First thing you are probably noticing is they like to hang out in brush.  It is nearly impossible to get a straight shot at these birds while in the field and eventually you just give up and take whatever line of sight you can get knowing there will be annoying twigs and leafs the big glass is likely hiding until you get into the digital darkroom.  Cornell does state the males will take to the tops of trees in springtime to call out in search of mates – this is likely your best chance to get an unobstructed view as the rest of the time they are either winding their way through the brush if not directly on the forest floor search through the leaves and bramble for food. While on the ground you will come to appreciate how well their coloring blends in with that environment much to the disgust of your autofocus. 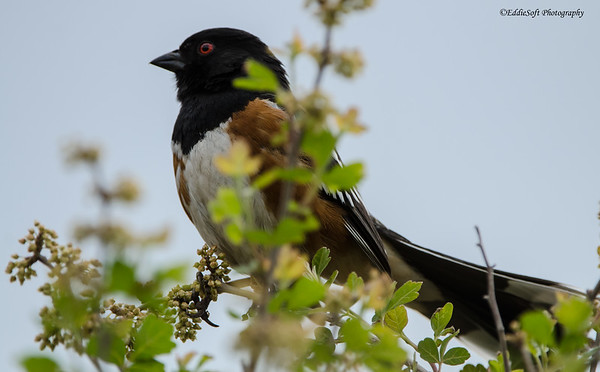 All in all, a pretty cool bird (not to slight the Eastern variety as I think those are pretty cool as well).  They will frustrate you if you’re out there to get one in the tin.  I’ve had to track these Towhees for hours just trying to get them to reveal themselves just enough to get focus on them.  Sure enough as you go to take the shot they’ll flip across a branch and deflect your focus.  I’ve said it here before, thank you for the age of digital or yours truly would be enjoying a different hobby.   Not much to give you in the interesting facts section of this post.  Cornell needs to step up their game, but did provide something I was not aware of – the Spotted and the Eastern used to be considered the same species known as the Rufous-Sided Towhee.  Kudos to the discoverer (and apparently the revisionists) that stuck to naming it based on features visible in the field.  They could have gone with Cat-Scratch-Fever Towhee as they are constantly using their talons to move brush away. “The first time that I got it I was just ten years old I got it from some kitty next door.”  For some reason I have songs on the brain today. 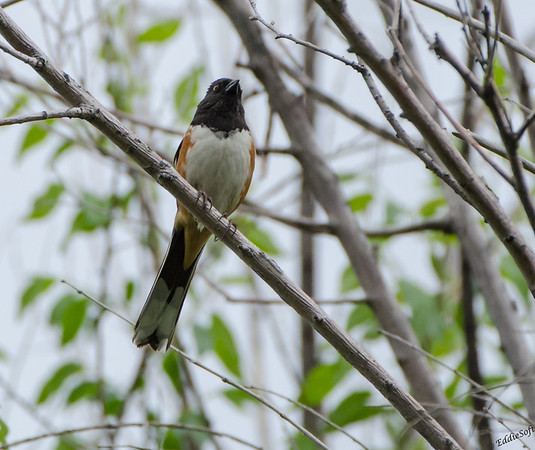 I’ll leave you with the least obstructed view from the series.  Not the best angle, but gives a better view of the underside and those white highlights at the end of the tail. Have to go now, Linda just stuck her fist through the phone – god help them if they come back with “put a paperclip through that little hole in the back of the boxy thing with the blinky lights”