Well, it’s March and at recent glance my last post came courtesy of February.  Now that is some mighty fine procrastination if I do say so myself!  Some of the delay was thanks to a quick trip to Vegas to get a little birding done in Henderson, some more Valley of Fire and still more in Red Rock Canyon.  May have even managed to add a couple more entries on the bird the life list.  If all goes as normal they might make their appearance here in hmmm, add that to that, carry the 1, give a slight buffer to complete the processing.. yep, 3 years sounds about right.  Granted Ron has been on my case about my snap to post lag so there is a chance these might jump the queue – maybe even ahead of the Ron Who Owes Me Bigley haul (as he has yet to post about that event – give him hell people!)  Then to top it all off, I’ve had to battle a broken garage door opener over the last two days.  Ended up having to replace the internal gearing which was quite the ordeal.  For the record, the genius that attached the metal drive gear to PLASTIC worm gearing is an engineering idiot.  Of course, the best part of successfully defeating the mechanical gremlins is being able to strut around the house rhetorically asking “Who Da Man!?!  Which is what I thought of when I saw this Tricolored Heron walking around the water like it owned the place. 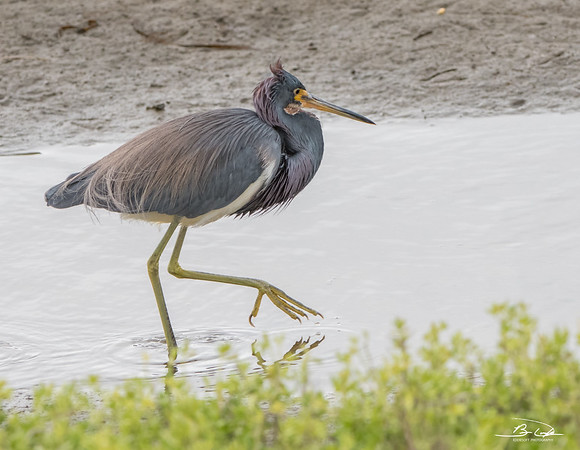 Probably successfully rebuilt a carburetot for his ‘Stang and making sure all the ladies in the area took notice. Them Tri’s are a handy bunch.  This particular specimen was spotted at the South Padre Island Bird Viewing and Nature Center back in December 2017.  And you thought I was kidding about the size of the image queue.  To my credit, I have been putting a serious dent in the multiple Texas trips over the last couple of years. 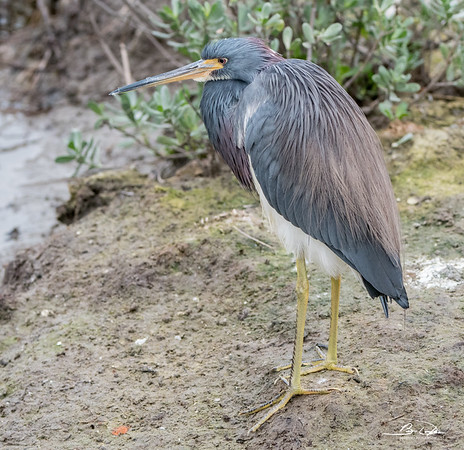 I’ve taken a lot of shots of Tricoloreds over the years.  Even posted on some of them back in 2016 (link here) and again in 2019 (link here). Each time I think I’m getting a little better with execution and admittedly pretty pleased with the latest bunch.  Typically, Herons are a good family of birds to practice your skills on.  The Great Blue Herons come as close as you can get to a perfect subject short of a dead one whose feet have been nailed to a perch (whoa, before the hate mail starts that was a Python joke – a hilarious skit by the way).  They are simply happy to sit on the bank motionless until a victim wanders within neck’s reach.  The Tricolored variety can be a bit more challenging.  When not strutting their stuff to celebrate a MacGyver moment, they are prone to making dramatic stops and spastic turns as they stir up their prey.  Catch them just right and you’ll have yourself a dramatic wall hanger.  This one was more predictable and more prone to deliberate movements giving me plenty of opportunity to dial in the manual settings for crispy portraits. 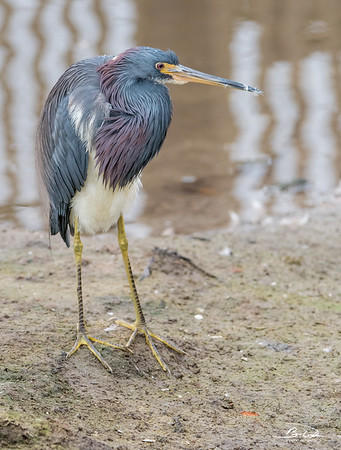 On the birding front, the Tricolored Herons are pretty easy to identify.  You should have no problem getting the family right as they possess the standard wader characteristics – tall, long necked with a bill that rivals a Misericorde.  A fitting reference for the fate of the fallen amphibians.  Once you get the family right, all you need to do is look for the darker purple feathering and the white belly to complete the ID.  You can also look for the white stripe down the neck if they are willing to let you see it – obviously our specimen is too shy to reveal this feature.  Cornell’s site was thin on the interesting facts category.  They did mention their teenagers are thankless millennials forcing their parents to bow to them before carrying out their parental duties. Good thing for the juvis their dads do not wear belts! 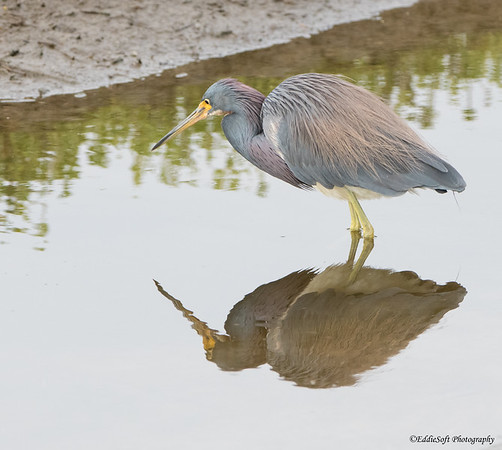 Have to call it a post.  Dealing with an injured foot – need to complete the night’s therapy schedule and probably go ahead and pound out a few miles on Mr. Tread – missed yesterday’s run thanks to that damn door opener. .  Will do my best to get back to you soon (so, did you look up what a Misericorde was?).