It doesn’t seem like a big deal, but the reduction in days in this month has a tendency to cause stress in my blogging activities.  Those precious days between the 28th and say 30/31st is often my “get down to business” days.  That’s when I take out my trusty TI60 calculator, punch in 6 for my self-imposed quota of posts per month (note, that includes post on the mothership Intrigued site, not just the wildlife blog), count up each of the posts made in the current month, hit the minus button and then insert the recently summed number of posts and hit equals button.  After a burst of electrons through an array of ands/ors/nands/nors logic gates the liquid crystal is signaled to delivers the painful blow.  Then the scramble begins to address the missing posts.  Granted, this year, gives me an extra day this month.. but that has already been earmarked for birding (need to keep the hopper full for the 2025 posts hehehe).   Linda enjoys teasing me while I am trying to stay focused on the posts – I shall let the Great-Tailed Grackle demonstrate the look I give her. 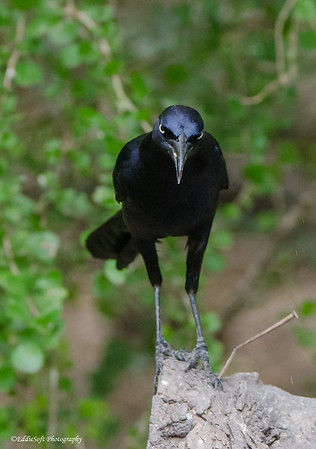 That pretty much sums it up!  I will admit, this has absolutely zero impact on my wife’s behavior beyond extra volume to her laugh.  Then she’ll start touching my stuff and moving it just enough to cause my OCD to fire – evil woman!  The good news is I wasn’t far off this month and was able to close the gap pretty quickly – for the record this is the 6th so all is good.  I might feel better, but this rather torqued looking creature is likely still holding a grudge against me.  In fact, every time I come in contact with the Great-Tailed Grackle I get the feeling I wronged its ancestors in some way and it’s taken a lifelong blood oath to extract a compensating revenge.  Is it just me or do others have this same experience with this disgruntled bird? – Ron you don’t count as all birds basically hate you. 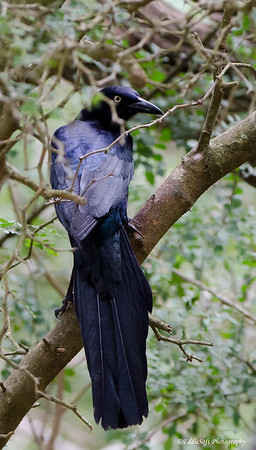 Hit the jump if this Grackle hasn’t already scared you too much.

For evidence, check out the first shot from a previous post on this bird (link here).  That shot always reminds me of the nuns that were responsible for my early education years… right before they would run their fingernails across the blackboard to torture us into giving up the name of a classmate who had the audacity to close their desk lid too loud.  Eeesh, I may be dating myself now.  Sorry, I digress, back to our shiny black friends. Just in case you are still wondering how this Grackle came to be named, they boast one of the most impressive tail feathering you will see in the States outside of a Scissor-Tailed Flycatcher (hey, that reminds me I need to get that post out) 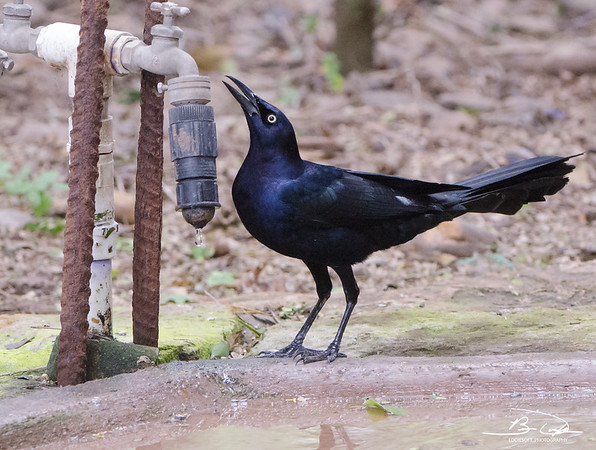 Actually the Boat-Tailed Grackle can hold its own in the tail contest.  Very similar looking cousin.  The Boat tends to hang out in the southeastern coastline and up into Florida whereas the Greats keep their angry gaze on the more southwestern states.  They have started getting more overlapped in the eastern Gulf Coast areas.  Luckily Mother Nature was kind enough to give us birders a very discernible characteristic.  Likely the feature that gives them the scary appearance – the pale yellow eye.  The Boats, in contrast, have a dark eye.  Spot those piercing yellow eyes on the other end of the feather train and you have yourself a quick ID. 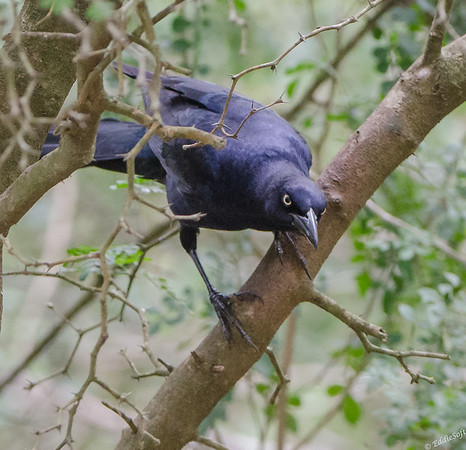 The females are cloaked in brown tones compared to the iridescence black of the males.  It has to be the eyes to give off this bad vibe as even the females display the same nasty disposition.  This female specimen was found at Aransas National Wildlife Refuge as opposed to the Laguna Atascosa National Wildlife the others shots in this series were found at – clearly location doesn’t have an impact on the bad mood.  Wonder if they make mood rings in bird sizes. 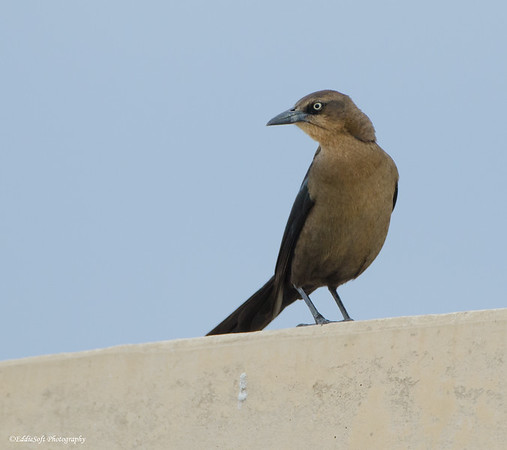 It is also very clear that like Linda, the female is unaffected by the evil looks from their mates.  Pretty sure I heard this female start laughing and then proceeded to walk around slightly moving the seed on its desk bring the male to the edge of a complete breakdown.  I feel for ya’ Mr. Grackle. 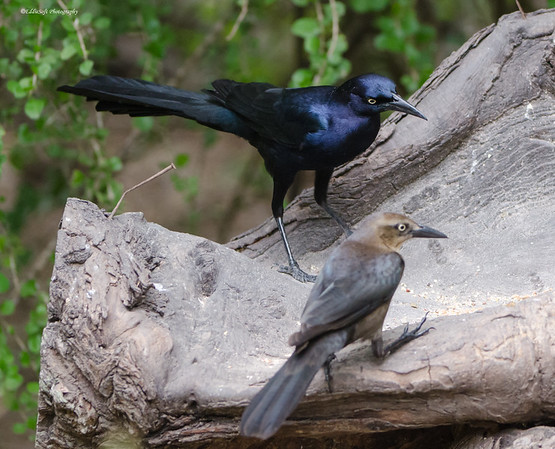 Especially when the female completely disrespects your magnificent tail.  I’d be pissed as well – completely uncalled for. Note, CJ, that would be the American definition of “pissed”. 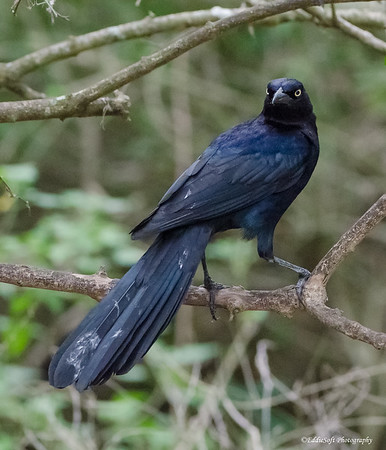 Better call it a post.  Big trail training run tomorrow and I need to invest some serious therapy time on my injured foot or I’m going to finish up with “Grackle Face”.  Based on the current schedule will probably catch you again in early March.  Until then stay happy… and Linda, STOP TOUCHING THINGS ON MY DESK!!