Howdy folks.  It has been a while since I’ve posted a race recap.  In fact, somehow I’ve managed to get FOUR races behind thanks to a late Fall surge that included a major check in my life list.  I will keep with tradition and do the recaps in chronological order… but trust me, I really really really want to get to that big one (hint, redemption).  So, first up is the race that is closest to my heart.

Yep, it was another running of the Bix 7 in Davenport, IA.  Your chance to run with the best which for those not familiar with running lingo means you get to stand at the starting line with elite runners from around the globe – many of which have excelled during the Olympics, won signature races like the Boston or New York Marathon or likely go on to dominate the upcoming racing circuit.  These specially invited participants come from across the States, Ethiopia, Africa and other runner hotspots (who now pretty much live and train in the US) in hopes of winning a car – although they always take the money equivalent).  Here is a picture of three of them!

Hit the jump to read a few details about this incredible racing event.

Okay, maybe not, but if we were gifted with taller/leaner bodies and had the resources those elites have available we could at least make it a bit more respectable.  Instead, we gladly settle for being “not the winners”.  I like to think we are all equals while we are standing at the start and if that was the competition the three of us would dominate over those international runners in extremely windy days.  Alas, they expect you to run (who knew ha).  FYI, those are my running buddies Ryan and Sung. Eventually, the starter gun goes off and 20 seconds later the race director announces those crossing the starting line have already lost. So why do we subject ourselves to the heat, the toll on our bodies and did I mention the heat.  That’s easy… for the medals of course! 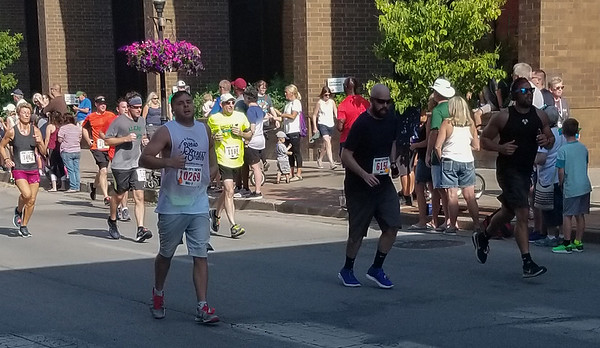 Now the Bix 7 doesn’t usually give out medals choosing instead to give their finishers the best post-race party in the biz.  In a bit of a slap in the face to the full 7 mile runners, they even let the Quick Bix (2 mile) runners enjoy the same amenities (I expect Linda to chastise me for that as she participates in this shorter one).  As a treat to us medal whores, they have been giving out finisher medals on their 5 year anniversaries and this happened to be one of those years – the 45th to be exact and my 17th consecutive run since selecting this race to start my running fixation.  Over those years I have run in good weather, mostly hot weather, wet weather,  absolutely soaking weather and just about every health condition you can imagine including sick, injured and in at least one situation a pre-race self-removal of a rather large area of infection (trust me, you do not want those details).  This year classified in the sick category.

(note, the prized post-race treat – Whitey’s Popscicles – and the ominous stretcher behind me – a fellow runner succumbed to the heat bringing back some bad memories from the previous race)

The week before the race we were up at Mayo doing pre-work for Linda’s heart surgery.  No chance to run that week at all so no taper – if you have to miss some runs, the week before is usually the best, so that was manageable.  The minute we made it up there Linda came down sick causing major issues with the surgery plans for the following week – thanks to shifting the surgery out a week, that ended up being manageable as well.  I rarely get sick myself which is likely due to all the exercise – being cooped up in a hotel room with a sick person and then being exposed all day to large groups of patients which likely had its share of sickness brewing eventually broke through my defenses – yours truly came down sick two days before the race.  Concerned about a) causing any more issues with Linda’s surgery plans and b) a bit worried about potential impacts on my race, opted to hit the prompt care the day before the race.  Concerns for the worst were subsided when finding out it was likely just a cold/sore throat – not a meds guy so grabbed some over the counter soothers and drove all the way to Davenport for the stay the night before.  Unlike the last race, wouldn’t be needing one of these! (link here).

The effects from the “incident” in the middle of the last race were still lingering and there was some self-doubt as to what condition I was really in having to take 10 days off due to the staples in the head and well, the whole heat exhaustion thingy.  Always up for a challenge – did I mention medals?  Ended up taking it easy this race.  Ryan stayed with me until mile 5 when I told him to keep going while I took a 1 minute break to walk up one of the steeper sections in the long uphill back to the start. This was a sufficient enough break to gather up my breathing and provide confidence to the internal heat regulators that I wasn’t going to stress it again.  Continued to keep a moderate race to the finish line clocking in at a 1:04:13.

Nowhere near my best time – last year was slower than usual at a 58:23 and I’ve gone under 55:00 several years back and pretty sure I’ve broken 50 one or two times as well – don’t have the time to go back and check, but regardless, 64 reflects the short walk and controlled pace.  Given the entire situation, I’ll take it – one race ago I was being picked up off the ground by medics.  All that is left to do is get that shiny medal up on the wall!

Oh, and looking forward to seeing Linda back on the starting line with me next year – the heart situation kept her on the sidelines this year, but I know she will be back there next year to test out the new components … maybe even the full 7!?!

3 thoughts on “For the Medal of Course”