Happy July 4th to my fellow countrymen and women especially to those who have or currently serving  in the military which brought and sustains our freedom!

Somehow my next event clock got into the steroids as I was sure there was at least 2 or 3 months left before my next race and next think I know it is a mere two days away.  With the final training run in the books as of last night, at this point it’s all about getting some rest, doing a few more healing treatments on the tweaked ankle mentioned previously and then either put up or put the tail between the legs and admit defeat.  The good news is the ankle felt strong in the quick 6 mile test last night – forward direction seems to be recovered, just need to make sure I make the foot plants solid as the outer stabilizers are still a bit tender.  As long as I keep it warmed up during the race it should be fine and expectations are the rest of the body will be so battered I won’t even feel it.

However something will likely be sticking in the back of my mind and it all has to do with this.

Yep, for the second year in a row, I took on the Blue Chevy Trail Classic back in May.  You can read all about my maiden run at this trail race on a previous post (link here).  If I remember correctly, that was my first official trail race.  Since that time I’ve added a number of others and have clearly grown to love this new venue.  It is definitely harder than the traditional road miles, but then again challenge is good for the soul (and my doctor’s and chiro’s pocketbooks).  With the extra experience from the other trail races and the luxury of having done several training runs on the same course since, there was a sense of more confidence than when I toed the line the first time.  Besides, this time the race coordinators stated there would be finisher medals this year which took the pressure off of having to place to get anything to show for the effort.

Riiiiiiiigggggghhhhhht!   Turns out there was plenty to worry about that race day.

Hit the jump to read a bit more detail on how the race went.

First thing first, this spring has been one rainy season.  If it wasn’t pouring on a given day, it was definitely cooler – that’s right c o o l e r than normal.  The latter impacts the body conditioning.  With basically ideal running temperatures leading up to this race, there was not a lot of opportunity to get the body thermostat calibrated for the summer conditions.  Thanks to the heat stroke episode, my internal controls are fairly touchy and will go into panic mode if it thinks there is a chance it might overheat again.  Contrary to Linda’s “voice of reason” there needs to be a number of training runs on hot days so the body will take it in stride when Mother Nature adds more gas to the oven.   Looking back, guessing there were less than 3 or 4 runs in the high 80’s or above mostly with bearable humidity conditions – crap.  Now the rain directly impacts how much toll the course will take on you.  Unlike wet pavement running which has little impact on my performance, the wet stuff can make for one difficult day.  Wondering if your shoe is going to come out of the ankle deep mud on each stride adds a sense of adventure and internal bets as to the likelihood you are going to look like a cult member from Apocalypse Now at the end of the race.  Answer – yes – added a picture of my race shirt to memorialize a rather bad fall around mile 10.

As luck would have it, I found myself in a hoodie before the race as the rains leading up to the start had brought with it a dose of cool air.  Maybe that lack of heat conditioning will not be an issue!?!  – except by the time the race started an hour later, the mercury was on the ascend.  Last year stayed at the back being my first trail run and not wanting to embarrass myself – this year moved up towards the middle to cut down on the passing on the tight trail in the early half.  The trail was in decent shape until you made it into the valleys – that was where the water had pooled and the mud mixing bowl was on overdrive.  At least three times I had to stop for a bit to find the best path across complete bogs with a few of those times just having to trudge through – nothing like adding ankle weights for a long run.  Eventually grouped up with 6 or so others keeping a good pace through the back half of the first loop.  Strangely enough, the required water crossings were not that bad at all with the exception of the spillway crossing which has no way of navigating around without getting your legs soaked up to the calves.  After a mile the squishies are generally dried out thanks to the technologies in trail shoes. Kept pace with that group until the end of the first loop only to find out they all STOPPED – they were only running the 10k version – oh no, “me thinks bad juju is on the horizon”:  That was exactly right.  They make the second loop of the Blue Chevy race harder adding in the biggest hill at the Farmdale Reservoir.  To get to it this year you had to navigate a mud slip in slide as the path was essentially the same one used by all the water coming off the hillside.  Horrendous – basically forced to slow to a crawl making sure you didn’t misstep and take a tumble sure to put you at the bottom before stopping.  Once through that, forced myself to run up the big hill to get out of the valley as soon as possible.  The rising temperatures had turned those into a stifling sauna complete with sunglasses fogging.  Body wasn’t happy and there was still a long way to go – more mud, more hot valleys, more mud – you get the picture.  At the spillway, had to take a few minutes to remember where I was at and why the hell I wasn’t still in bed.  Once sorted out headed through the by now very cooling water in hopes of closing out the remaining 3 or 4 miles to the finish. 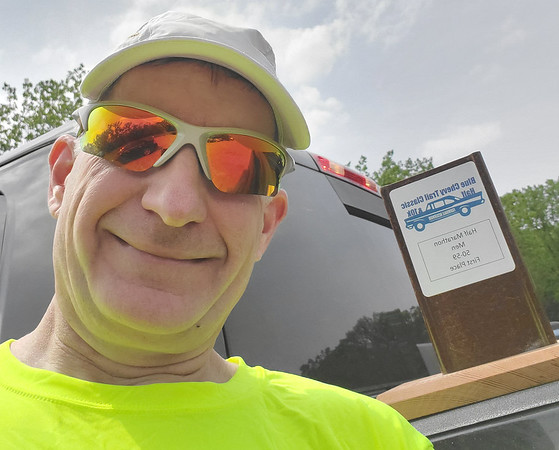 Gut check time.  For most of the second loop there really wasn’t anyone around me – felt more like a training run than a race – even at the spillway delay no one came up on me.  In the 10th mile a younger runner closed the gap and passed me as my pace had dropped significantly from the unintended first loop pace.  Moved to the side and let him pass enjoying the extra rest.  Looked back on the trail and didn’t see anyone else as far as I could see.  Glad there wasn’t a horde of runners catching up with me, turned and headed back on task.  Three strides later found myself face down in the mud and weeds by the side of the trail – @#%@#%@% clipped a root.  That impact hurt both my pride and more concerning my ribs as I caught an elbow under them.  Dragged myself off the ground, gave a few choice words at the root which was holding its belly thanks to laughing so hard and then headed out. No one actually saw it, but the shirt clearly announced what had happened.  Fought my way to mile 11 only to find myself passed by another runner – this one closer to my age – thank god they were giving finisher medals.  Turned my gaze back to the trail and went back to work.  Solely focused on the trail and my own suffering didn’t notice until almost running into the last person who passed me who was now stopped at mile 12.  Once confirmed he was okay, continue on only to get passed by him again on the last gradual climb to the finish – nothing left to hold him off at that point – more power to him.  Personally elated to finally cross the finish – the effort used in the first loop cost me dearly on the second taking a 2:23 for the day – around 3 minutes longer than last year.  Felt deflated at first but then started noticing the lack of other contestants coming across – one there, another eventually, maybe two together, but clearly there was carnage littered throughout the trail.  The heat seemed to take its toll on everyone.  I took a shot of the finish line once I had changed into dryer clothes.  Yes, the dude on the left was leaving his mark.

Decided to hang around for the awards presentation just to see how bad I did relative to the field.  Assumed the guy who passed me last was in the same age group and knowing how I felt at the end assumed others were better prepared.  This doubt turned to absolute surprise finding out I had won my age group.  Wow, I sucked the least and their age groups were 10 years and not the standard five.  That made me feel a lot better – mentally, the body was trashed.

I came in 13th overall which isn’t that shabby bowing down to the 17 year old that owned us old guys.  I now have this addition to my exceptionally small trophy collection.

Ended up being a good thing as the finisher medals that were advertised in the race brochure ended up being a paper beer coaster.  You can see it in the first shot.  That would have been disappointing if only I had to show for a bruised pride and muddy outfit was a sweat collector for my beer.  Although, the trail races are a different breed than the road races – this likely allows them to keep the entry fees lower and probably adds to the much more community feel of the races so if that requires limited swag then I can definitely accept that … did you see my trophy ha!

Should probably wrap this up – can’t wait to get back on the trails Saturday and see what new challenges it will bring.  That which doesn’t kill me…. still hurts a lot ha.