Wanted to get another post out as I’ll be hunting for a White-Headed Woodpecker over the extended weekend.  Will likely have difficulties getting to new posts during that time being deep in unexplored wilderness fending off Cougar attacks, dodging Viper strikes, wrestling Bears and befriending wild Wolves to survive long cold bitter nights.  Well, for at least part of the trip, there’s a wedding event involved so I’ll have to clean up to at least attend that ceremony … but then back into hiking boots with The Beast to seek out the prize.

As we’ll back in snow conditions for this hunt, thought it would be appropriate to feature creatures that give tribute to the white fluffy stuff. 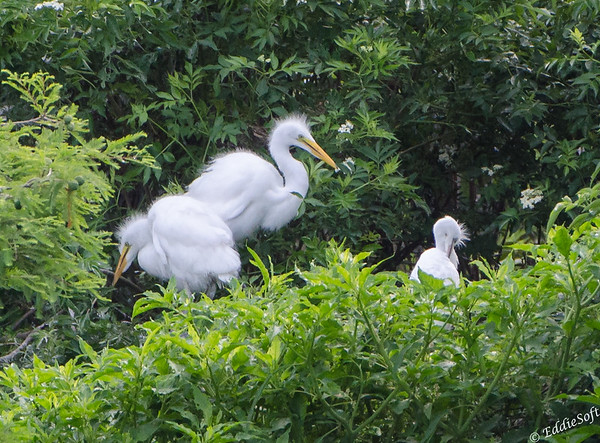 It is awfully hard to take a birding trip (short or long) where you do not have the opportunity to come upon an Egret or a Heron.  If you happen to be a wildlife photographer, I will bet the farm that you have tins full of these birds.  Also guessing those primarily came from your early birding years as they are the PERFECT photography subject.  When these birds are hunting it will make you wonder if they make Ritalin for Sloths. Need to learn how to use an expensive camera, desire to understand the exposure triangle (ISO, Shutter Speed, Aperture), maybe want to practice breathing techniques to stable your long glass – either way, these shore waders are the go to subject.

What you do not often get a chance to get in the tin are Egret/Heron offspring. 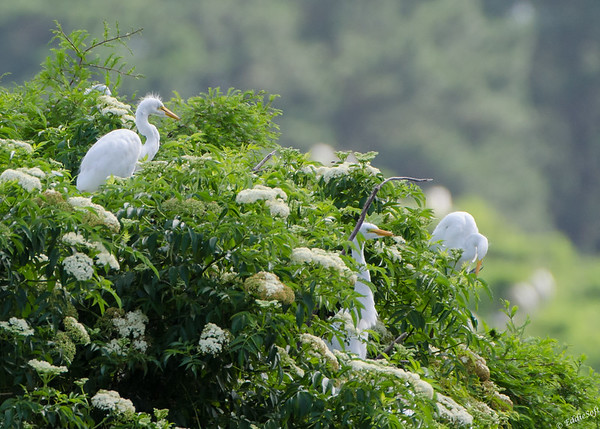 Hit the jump to see a few more shots and try your hand at an ID.

Luckily Harris Neck National Wildlife Refuge gave me plenty of opportunities to get these fluff balls in the tin back in May 2015.  This site has been featured numerous times in recent posts from our trip to Georgia.  If you recall, the Wood Stork (link here), Anhinga (link here) and shudder… Gators (link here) were all spotted at this swamp outside Savannah.  Today I bring you the products of the local breeding season.  It was hard to tell who belonged to who as they were spread out all over the place with multiple adult pairs intermixed with different groupings.

Surprisingly, the parents of the Great Egrets juvis in the shots above really didn’t worry too much about other adults being near their previous cotton balls.  Even more intriguing they didn’t seem to care if other species were in the vicinity – everyone living in perfect harmony… albeit collectively above a murky swamp teeming with top tier predators.  Always amazes me how these Egrets are able to keep so clean in these conditions – by the end of the day of birding I can look like a chimney sweeper or minimally the mud splatter look I was sporting after Saturday’s trail run.

There were plenty of Snowies in the bunch as well.  I wasn’t able to get a good shot of their offspring, but did manage to capture this specimen below.  Typically I come upon these birds outside of peak breeding period.  That puts them in their bright yellow lores where this one was sporting the red coloring between the eye and the base of the bill.  Believe this is the first time I’ve been able to tin this height of the breeding season indicator. 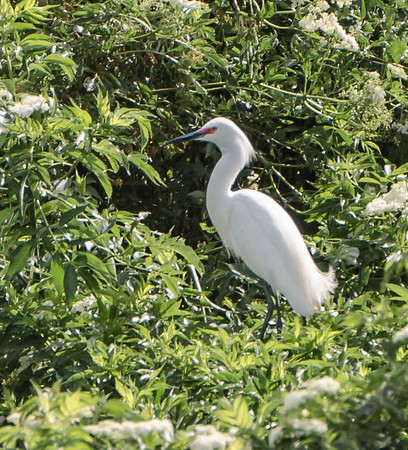 Okay, now it is time for some audience participation.  No fret, I’m with you when it comes to presenters leading with that line.  When that happens at my classes or conferences I’m faking a call to my cell phone.  The great thing about blogs is you can leave the phone in your pocket I won’t be calling on anybody – except for maybe Ron as he is usually my bird ID validator (ring, ring ring ha).  Okay, while going through the spoils of the shoot, I spotted this specimen hanging out some distance from the rest of the community.  I didn’t think much about it at the time as it was tall, white and in my hasty judgement looked like more of the same.

In the digital darkroom I have more time to take in and enjoy the details.  The feature that caught my eye was the bill.  I am pretty familiar with the dark bills of the Snowy, the yellow bills of the Greats and the two-toned bills of the adult Reddish Egrets and Little Blue Herons.  The latter two sport very non-white adult feathering which clearly did not match the specimen in these two shots. To the reference books!  Quick soapbox moment – Cornell does wonderful things in the bird space and their reference sites is definitely one of my favorites, but they need to improve their content related to offspring.  I could find very little regarding juvi bill details to the point I gave up and pulled down Peterson’s and Sibley’s reference books.  Those two had conflicting details, but clearly showed juvis did indeed sport white or at least a morph option.  Sibley indicated they have pale grayish green or pink bills and lores with a dark tip.  They also showed the Reddish having a solid bill as juvis and morphing into dark tip at adulthood.  That sounded like an easy ID until I looked at Peterson’s.

His description of the Little Blue indicated white with dusky wingtips with base of bill being blue-gray, greenish lores and dull olive legs.  That didn’t match well with my specimen as you can see from the last shot white throughout.  I then found this interesting inset – it showed an adult Reddish Egret all in white with a two tone bill.  This they labeled as a White Morph vs the Dark Morph I was used to seeing.  A close look at the description added “Adult has pink bill with black tip with entirely blue-gray legs and feet which if you ask me, appears to be a dead on match.  Based on the lack of dark wingtips and the other matching elements, my opinion is this is a White Morph Reddish Egret (Sibley be damned ha).  If you have an opinion, please let me know in the comments.

Linda says I have to go build an ark as the rains are once again coming down hard.  Apparently all you need to do to get it to rain every day is to dig a new well – unbelievable, so far could have saved thousands of dollars and just bought a large bucket to put in the yard and stuck a hose in it.  We’ll see how the summer months go, but this is ridiculous.