Probably wasn’t a stretch to guess the topic of tonight’s post based on the foreshadowing in the previous one.  The Allerton Trail Race Weekend was a double event.  The previous work went into detail on the first of those two events, the Trail-Glo 5K.  I covered a lot of ground in that initial recollection knowing I would be able to skip over those details in the second race’s recollection.  So, let’s just jump right into it.

The first race is really just a fun run – a quick warm up if you will before the big race the second day.  There are two race options to select from, the 10K version and the uber manly (I may be biased) Half Marathon.  I really shouldn’t be condescending on the shorter distance – everyone is a winner that makes it through any race distance, toeing the line is a victory in itself.  Note, like the 5K, they added the extra logs for those that made additional contributions to Make A Wish Foundation.

Hit the jump to see some of Linda’s work from behind the camera and learn how the race went.

I can’t even begin to convey what a convenience it was to be able to stay in the park the night before the race.  No need to get up before the crack of dawn, fret about getting all the morning tasks done and proper race prep out of the way before making a trek to the event- and that is even with my lovely wife dealing with most of the hard work like driving and putting up with my race day fretting.  Also enjoyed the fact the race started at 9am giving me plenty of extra sleep time – definitely more restful not having a giant god looking down upon you while trying to get some shuteye (see previous post). 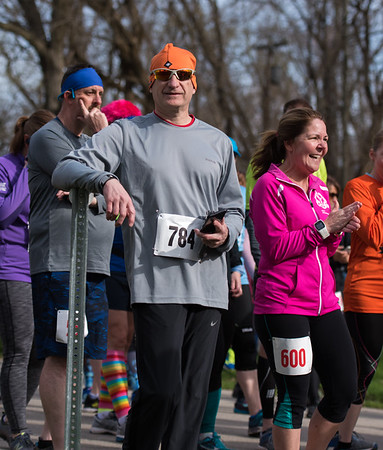 I must say, it was still quite a trek to the starting line.  We drove back to the general parking area by the visitor center where the 5K kicked off the night before.  Unfortunately, that day’s race staged what seemed at least a half mile from there.  A good warmup for the legs, but Linda didn’t appreciate it very much especially carrying the camera.  Have I mentioned lately how much I appreciate my personal race photographer!?!  The best news of the morning is the rain had moved out to much later in the day and the wind wasn’t really a factor.  This made for a quandary on what to wear so went with the same layering as the night before – the temps were lower, but the sun was out – hard to really judge that and in the end wish I’d gone with shorts rather than the running pants.  Others around me had guessed better – oh well, lesson learned for next year. 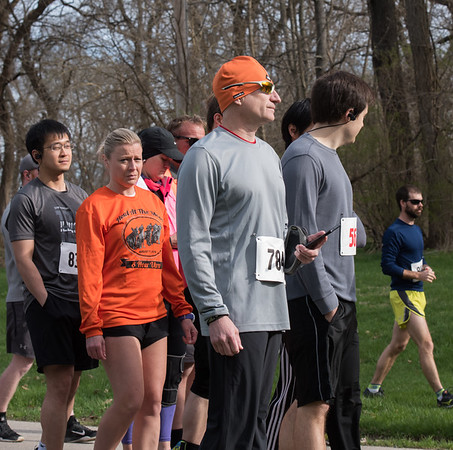 Left in the picture above because it cracked me up.  The lady behind either didn’t approve of my warmer gear or was disappointed she didn’t have someone willing to take race pictures for her.  I like to think of her as a bandit without a number that had just been outed ha!  If you are keeping track, black numbers represent the half and the red numbers the 10K.  We ran the same course except they peeled off to the finish at the halfway point while we continued on for more torture. 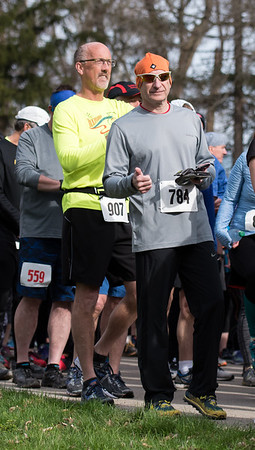 All’s good, no ill effect on the legs from the night before and weatherwise couldn’t ask for anything better being that it had rained the week leading up to it, had been forecasted to rain that day and get this – it snowed the next day – 4-6″  in our hometown and more farther north.  Generally, running in snow is a blast, but on an already soggy trail that would have been extra dicey.  One thing did bother me a bit.  Due to all the rain, the alternate course had to be used as the bottoms were flooded out.  The alternate course stayed on the higher elevation, but included a significant amount of road.  I had no idea that was the case and stood at the starting line with my heavy duty trail cleats wondering how that would go.  After at least a mile and likely more of the pavement at the beginning of the course I knew the answer – not well.  The road is very unforgiving and every step caused a jolt to the body as the trail shoes are minimally cushioned.  Probably included at least 2+ miles on the road over the course ugh! 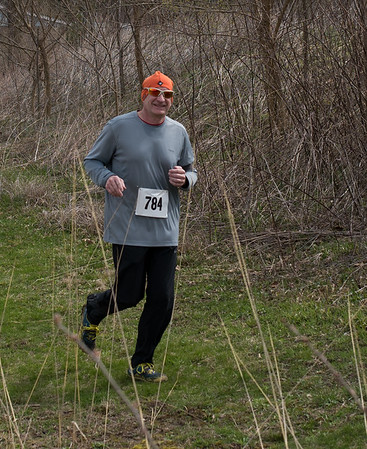 The shot above was around mile 8 which ended up going right alongside the RV giving Linda another chance to get some shots.  I chose one that didn’t reveal  how much pain I was in.  Probably due to the heat from the layers, but more likely due to a mind-numbing trek through a field.  God that was awful.  I entered that section just as another runner was exiting (still smiling by the way).  Okay, this must be  a short section….. ummm no.  I just kept running and running and running and running and running and running – it was like the trail version of the Bermuda Triangle.  Basically the trail kept meandering all over the place which was sneakily hidden thanks to the very high grass off the trail.  It didn’t help that I was trying to keep up with the Energizer Bunny that was cruising effortlessly along the trail.  Told myself I probably had 30 years on her just to make myself feel better.  By the time I finally made it out of that area it was permanently tattooed on my brain just how far ahead that runner was that met me going in.  Well, second place to the Bunny was definitely out.

We made our way out to the Sun Singer statue weaving our way  back on the trails.  Forgot to mention there were certain sections that were extremely muddy.  I knew about the patch towards the end thanks to the 5K the night before, but there were plenty of standing water spots along every trail stretch.  Thankfully I was towards the front of the pack allowing me to go wide on the trail to keep most of the mud off.  By the time the rest of the runners made it through I’m figuring there was no where to go but straight through calf deep muck.  There was a humbling moment on the course.  I was digging deep between mile 10 and 11.  The big hill was coming up and the legs were starting to complain (again, likely due to the extra amount of road work).  I had noticed a young kid and a much older guy running together behind me – at the time didn’t think much about it under the impression they were probably as tired as I was and hills are where I excel.  Wow was that a bad assessment.  I came to the area I hit the mud the night before, slowed down just a touch to navigate through the higher portion and whoooosh, there was a blur that went past.  Those two were absolutely cranking it – holy crap.  I know when I’ve been bested and those two wasted my ass.  I was able to make up a small amount of distance on the incline, but they turned on the turbos when they reached the flat at the top.  About a mile out, they were amping it up, where I was cursing the extra layer of clothes.  The hat came off, the eyes drilled into the trail and concentrated on keeping the motor churning.  This is the part of the race you spend the year training for.  Mind over  body, mental over fatigue.  At some point in that last mile realized the feet were leading my back down into a valley – WTF, thought only the Moonlight Race directors were evil enough to make you climb to the finish (link here). 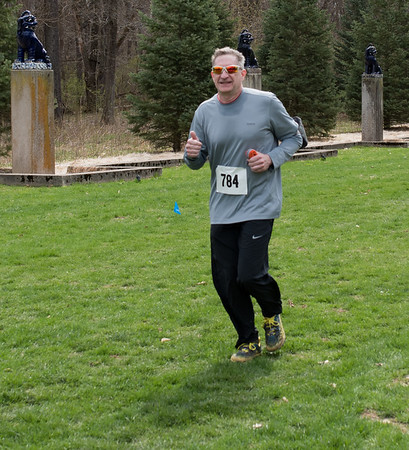 The finish ended where the 10K did.  Once I had climbed out of the valley it was just a dash to the finish through the famous Foo Dog Garden.  This may be one of my favorite finishing settings – pretty cool to run past all those Chinese statues.  Another hard race in the books – Apollo would be proud.

Next year, less layers and not going to let those two runners beat me.  Turns out the kid was 8 years old and the guy had a different last name so guessing it was the kids personal trainer.  Chuckled when I noticed the trainer came in 4 seconds ahead of the kid… harsh (reality is the guy probably triggered the start timer after the kid and finished together).  That kid won his age group.  Now for the disappointing part, I ended up 4th in my age group, around 2.5 minutes back.  No award for me, but this is one of the few trail races that give finisher medals – hooray!!

As expected, the dude that owned me coming out of the field won the race a mere 36 minutes ahead of me -damn 23 year olds hehehehe.  The top finishing male and female were given ceramic replicas of the Foo Dogs – now that was cool…and clearly out of reach at this point.  I keep reminding myself I didn’t run at all until age 36 and that was due to a some bad injuries in martial arts.  Also wonder what it would have been like in my prime (although bets are I could have at least outlasted every one of them in combat).

…and the traditional post race shot.  Not your average ambulance, but definitely not in a position to be picky when it comes to hauling my butt out of the woods to the hospital.  My final standing was 32nd.  Respectable, but something to improve on for next year. 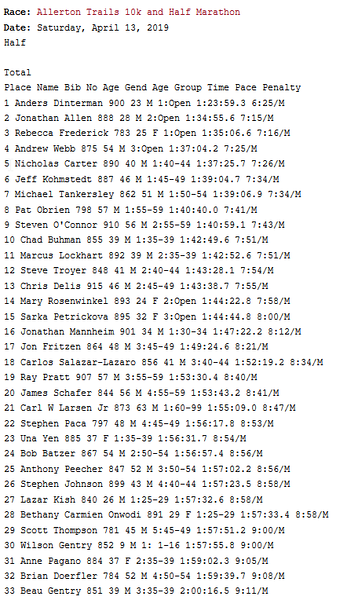 As mentioned earlier, a very respectable 4th in the old farts category.

All in all, one fun race weekend.  Kudos to the race directors that put this event on – top notch and we can’t forget about the real purpose of the race, raising over $80,000 for the Make A Wish foundation.  Count us in for next year – fingers crossed for similar weather!

2 thoughts on “A Test Worthy of the Gods”