Had a great training run today which translates directly to being completely exhausted.  There was finally a break in the rain for a couple of days allowing me to get some quality time in on the trails.  They were surprisingly dry considering the amount of water that has poured out of the skies as of late.  That didn’t mean there wasn’t any swamps to navigate in the valleys and the one stream crossing required some precise leaps to stray rocks struggling to keep their heads above the onrush, but at least the hills were dry enough to get traction.  Clearly need to get a steady barrage of heat conditioning – felt the warmer temps about halfway through the 11 miles.  Figured I’d be productive while the legs calm down prior to tackling the mowing (rain on its way back to start the week off). 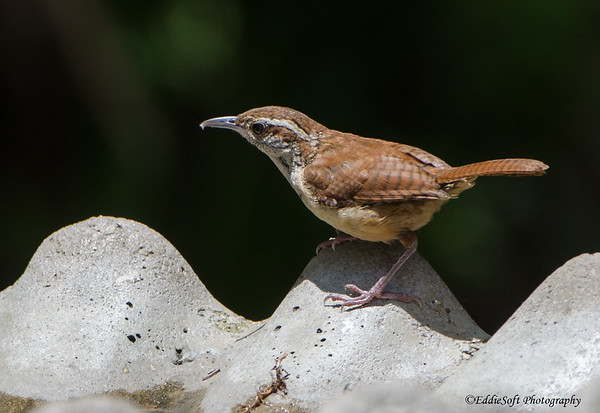 Hit the jump to see and read a bit more about this Chatty Cathy of the birding world.

Going with another capture from the Georgia birding trip back in May 2015.  This is not a new bird to the list having been featured back in July 2016 (link here).  That previous post was thanks to local specimen deciding my woods was a cool place to hang out.  Like that sighting, this one was also not found in the Carolinas.  Although one might imply by the name that they only root for the Tarheels, but truth is they cover most of the Eastern half of the continental US year round.  I guess they could all still root for the Tarheels – more research needed on their sports affiliation.

If you recognize the bird bath, you are very astute.  This specimen was found at the same place we spotted the Painted Bunting (link here) – specifically at Skidaway Island State Park. Since the primary focus was getting the Painted in the tin, there was not a lot of time devoted to this Wren. It didn’t help that I already had the Carolina and well, the other inhabitant was a Painted – ’nuff said.  There are several Wrens that are easily spotted in the US.  The Carolina is distinct in that they have the long bold eyebrow coupled with the reddish brown back feathering .  The Bewick’s (link here) and the Rock (link here) also sport a whitish brow, but grey in their color palette. 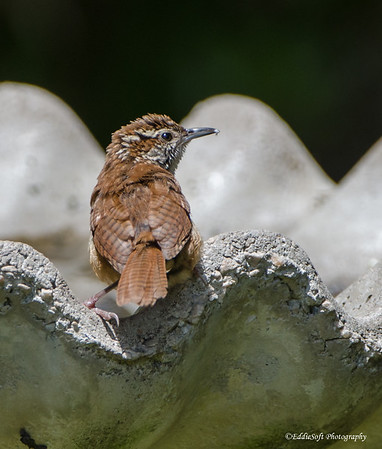 Okay, here is where it gets a bit tricky.  In the same set of shots, the image above and below were found.  You probably noticed the stripe is a bit muted and broken.  This caused some serious digging in reference sources to find out if juvis have a different coloring.  For the record, Cornell only  has pictures of adults and does not mention anything about the juvs.  Broke out both Sibley and Petersons.  Peterson also failed to disclose any distinction.  Fortunately, Sibley had a reference shot which showed they also have the bold stripe.  There is also no distinction in the genders.  Looked in a few more spots and finally came to the conclusion that these shots are post skinny dip.  I do have a couple of blurry shots as it was shaking off the excess likely leaving the feathering a bit of a mess.  It is definitely up for debate and would be interested in any opinions.

Okay, that brings us to the end – warned you I didn’t take a lot of shots – did I mention there was a Painted in the area ha!

I’m out, the legs are recovered and the grass is taunting me … daring me if you will as I gander out my den window.  That might work on the goats, but I come armed with sharpened Valyrian steel.

One thought on “Sitting in Georgia, Looking at Carolina”