How is this for a weird experience?  I mentioned a few posts back that I was recovering from a back injury, but I didn’t go into too many details.  Now that I am completely healed from it, thought I’d loop everyone into a bizarre injury that had me pretty worried. The last thing I need when training for a 50K event is to have an injury – especially in such a critical area.  Usually On Sundays, some friends and I do long training runs on a hilly nightmare of a course through a local cemetery (figure they can bury us where we drop).  A few weeks ago we were taking on the course in pretty warm weather for an early January day – mid 40’s accompanied with a strong wind.  Decided I was too layered up for the conditions so took my Gore-Tex coat off, removed a layer and put the outer shell back on (important tidbit for later).  Although a rocky and uneven course, we know every square inch of it – no slips, bobbles or wobbles occurred up to mile two.  That is when I felt something pierce my lower back.  I noted the strange feeling to my friend and kept on running – quirks and pains happen all the time – runners learn to ignore them because they almost always work themselves out.  2 more miles and my hips started seizing up.  2 more miles and serious pain started radiating from the lower back.  3 miles later we were back at the car and I was trying to figure out a way to stand without letting my friends see any hint of tears.  30 minute drive home and I couldn’t move without a knife twisting in my spine.  Most concerning was a 5×8 inch badly swollen red bulge near where the initial stab was felt.  All I could think about was the setback to the 50K training (goals are not taken lightly around Intrigued).  For brevity, will skip to the juicy part.  Got into my doctor the following day – explained the story above preparing myself for the herniated disk diagnosis.  Was not expecting the doctor to hypothesize that it sounded like a spider bite.  The recluse would have destroyed skin by now, so they speculated Black Widow, grabbed a magnifying glass and went to work finding the holes.  Good news, not a Widow, instead they pulled a stinger out of my spine what I imagined to be the size of this bird’s bill. 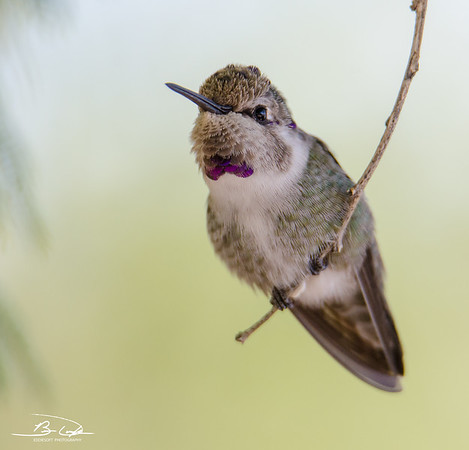 Not sure who was surprised more, the doctor or me.  Apparently a dagger wielding demon of an insect decided to unload all the venom it had a few inches up from my waistline and directly into the center of my spine.  From there it traveled my nerve network down into the in the hips and up the back causing the lockup.  Remember, this is the first week of January – those things are supposed to have died off or went into hibernation.  No way it stung through the outer running shell.  We have come to the conclusion that a wasp,hornet,large ass bee or possibly a Tarantula Hawk (link here) sneaked into the coat when I was removing the layer, panicked at mile two and unloaded everything it had into the spine – I could see a blood spot on the base layer next to the skin.  The good news is 5 days of steroids had me back on the trails this morning running in 5″ of snow.  I bet I know what you are thinking right about now – what the hell kind of bird is that?

Hit the jump to find out!