Happy New Year Everyone!  I am still working on my year end blog summary – amazing how long it takes to go through and get the annual blog stats.  While I am still working on that, figured I would go off topic a bit and highlight a trend that appears to be growing.  Unfortunately, this trend is not a good one, in fact, one could say it is a downward spiral (an appropriate toilet pun) … at least from my perspective.  I started seeing signs of this while shopping at various places during the earlier part of the year.  It didn’t really hit home until the November-December timeframe while out picking up presents for family and friends.   It seemed like in every store we bothered to go to this year, there it was, smelling up the aisles.  Toy after toy, decoration after decoration focused on a particular theme.  I decided it was time to highlight this on the blog as evidence in case any fake mainstream media wanted to go off on what a shitty year this was.

The weird thing is the thrust of the [bowel) movement seemed aimed at children.  I bring you example number one found at Bass Pro – Doggie Doo: When you gotta go, you gotta go complete with exclamation point.

From the look of the packaging, this particular toy involves a wiener dog that farts out smelly bees.  This results in not only the bystanders being offended, but the smell has apparently bored a hole through the ozone layer causing a fouling of the sun.  I had to know what this game was about – deep down hoping this was just a typo and they were really not offering a game of clean up poop to our children.  Nope, unlike CNN, there was truth to the story.  This was indeed an exciting game of pick up excrement (making the CNN reference surprisingly accurate).  Let me get this straight, they spin a wheel, squeeze a pump attached to a leash which eventually causes the dog to choke out pieces of crap which the kids happily grab up to earn themselves a fart token.  The kid that manages to scoop up the most crap is crowned the winner.  Linda, can I get this for our nephew and nieces!?! 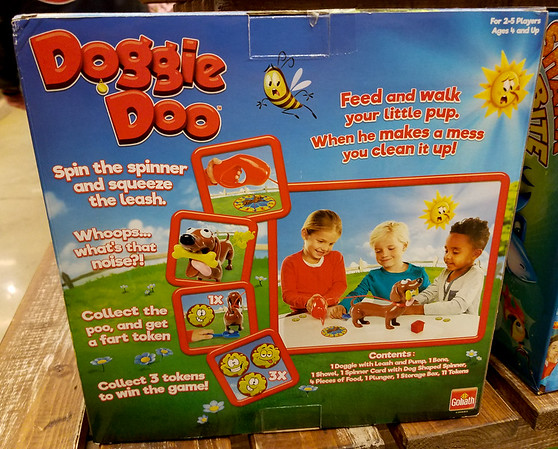 Hit the jump to see some more crap!