Well, I had my annual wellness exam with my doctor today.  Another year with “impeccable” (doctor’s word, not mine) health stats.  A constant diet of running and lifting may take its toll on your time over the year, but it definitely pays off in the numbers.  My employer also provides me annual comprehensive lab screenings so I knew the numbers going into today.  Ironically, I came out of the office with a hole in my arm and an hour or two later I wasn’t able to lift my arm above my waist.  Extremely healthy going in…damaged coming out thanks to my doctor convincing me I should get a tetanus shot with all the trail running.  Probably a good plan – I do shed my fair share of blood during the course of the year with the Halloween props, work on the lot and ideas that do not go as planned  – but damn this hurts.  Making the most out of my gimpy fin, figure it never hurts to stay on top of the blog quota. 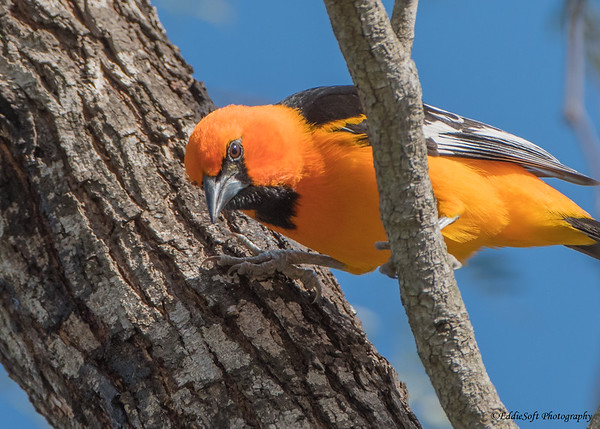 Keeping with the theme from the last post, tonight’s offering focuses on a bird that has previously debuted on the blog while trying to get as many Texas birds added prior to the Audubon speech (link here).  Like the Woodpecker, it was also found at Bentsen-Rio Grande Valley State Park (along the Rio Grande River) while on a birding trip to South Texas at the beginning of the year.  Similar to the situation with the last post, the previous series was taken in rather harsh light. 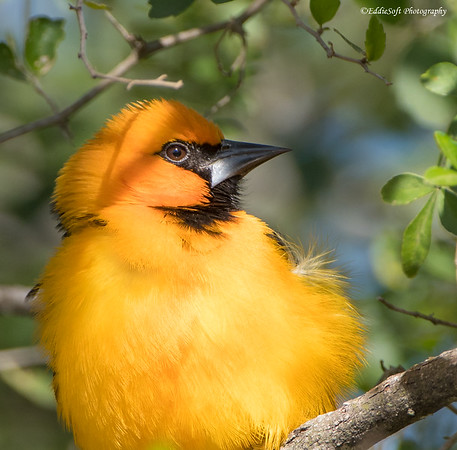 Hit the jump to see and read a bit more about this Central America bird.

This set is a definite improvement over those (at least in my opinion).  If nothing else, definitely got you a bit closer to the bird. Really a stunner of a bird and not sure the pictures really do it justice.  The orange coloring is brilliant orange – probably the brightest of all the Orioles we have here in the states.  This makes them very easy to pick out in the greens of the surrounding trees.  They also have a song that sounds similar to someone just learning to whistle with calculated blows  – sharp and short with increasing volume.  Their call is more in line with a short Grackle heckle. 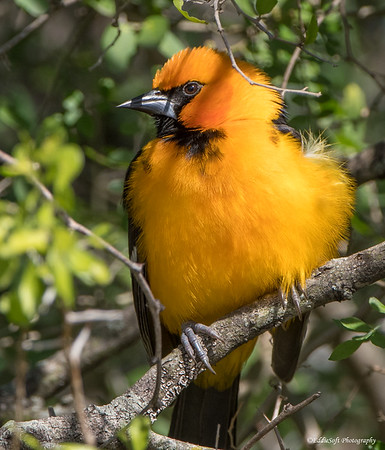 If you are wondering, these birds are really not that plump.  It was pretty cold that day (for Texas) which resulted in a lot of the birds being puffed up more than usual.  The shot below shows a slightly sleeker profile.  Like the Golden-Fronted Woodpecker in the previous post, the Altamira enjoys a suet snack.  Their primary nutrition comes from insects and fruit.  I did notice that the Altamira would not interfere when the Golden-Fronted was on the feeder.  The Altamira sports a beefy beak, but it is no match for that Woodpecker’s jackhammer of a bill. The Green Jays are a different story.  There were several times when those two would have a tussle at the feeders – those bills are on equal footing. 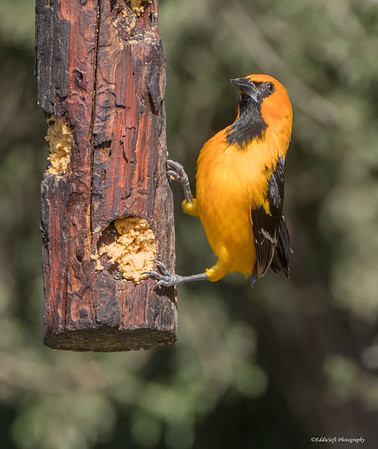 As mentioned in the initial post about the Altamira, this bird only comes up to the very tip of Texas preferring to spend their time along the coasts of Central America.  Probably a good thing for the US Oriole community being that the Altamira is the largest of the Orioles and would dominate all the reindeer games.  Oh, take note of the orange bar above the white bar on the wing – that is a quick way to distinguish this Altamira from the Hooded Oriole in the field.  The Hooded sports a more pronounced white bar – it also has a thicker black marking extending further into the cheek area – difficult to really tell that unless you have a reference handy of the other. 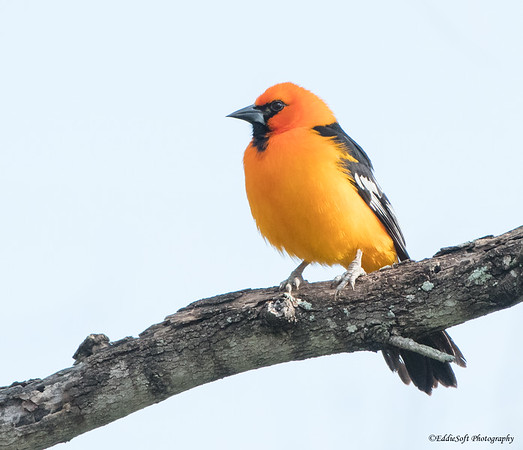 Thought I would go ahead and throw in a shot taken while at Laguna Atascosa.  It came out a bit soft, but gives a very good perspective of the facial features.  This image also shows how that key field indicator (the yellow bar) can get eclipsed. 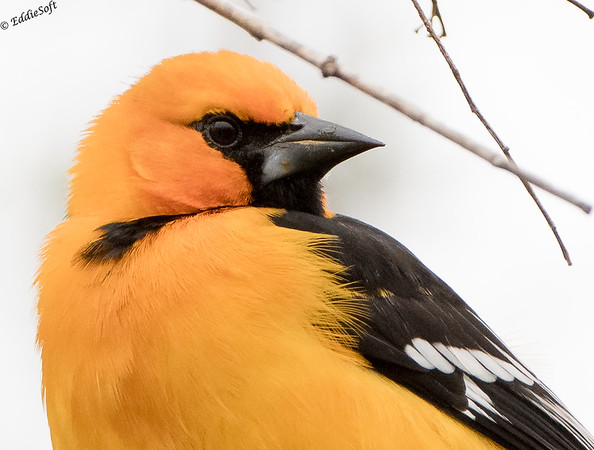 Going to call it a post.  My arm is still killing me – time to try some ice.  Missed my lift night as a result and do not want to skip my run scheduled for tomorrow.  I have just a few more miles to break 1100 this year and can’t afford to leave any days on the table.  Stay safe until we meet again.