Brace yourself, this is going to be an ugly ride.  There are times when I wished I had studied up a bit more before going to a particular birding spot.  Typically I’ll jump on the web and try to find a bird list for a destination, but the focus is usually on the entries with the capital ‘C’ next to them.  Those represent the species that are common to the area and therefore the list I am more than likely to see depending on what season our trip falls in.  A quick check of those against my birding list results in a series of circled birds that are considered my target birds and therefore the ones that require Linda to find creative ways to entertain herself until they are officially in the tin 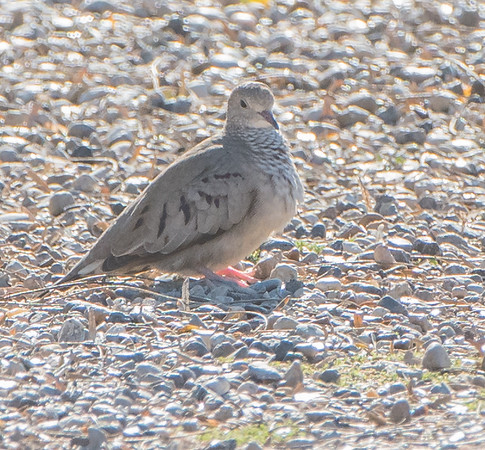 Hit the jump to read a bit more about how this Dove made it into the tin.

Granted, sometimes a particular birding location may be a bit loose on their definition of what “common” means causing Linda to become … let’s go with disgruntled… which is typically charaded out with stern looks, foot tapping and the not so subtle exaggerated pointing to her watch.  These, of course, are all things a seasoned birder knows how to deal with (as in NEVER make eye contact – NEVER EVER – which, is actually something our dogs have also learned to use against us).  Somehow, the Common Ground-Dove was not circled on the birding pamphlet for the Estero Llano Grande State Park in Weslaco, Texas.  We ended up there in early January of this year while on our Rio Grande Valley birding tour. Now, the real reason I’ve described my approach to birding new places is to help explain why, once again, I have to check my pride and feature a set of fuzzy and blown out shots.  If I have located a circled bird, all concentration goes to getting that specimen in the tin – as many angles as possible – as many behavioral shots as possible – as many quality images as possible.  If another bird decides to visit a quick assessment is made.  Is it a circled bird, do I already have it in the tin with as many shots as possible etc..  If that split second analysis comes back with a positive, a few quick snaps are taken just to have a record of it and then back to getting the target bird. 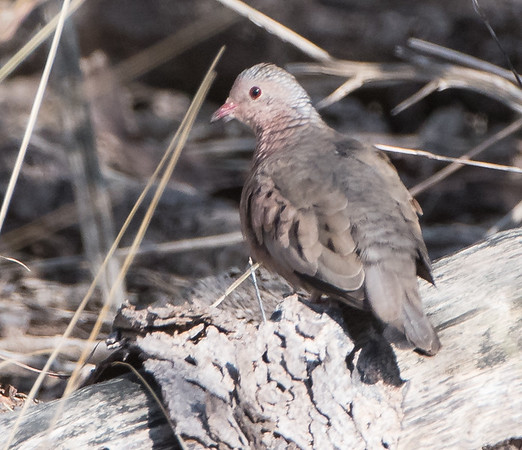 Probably figured it out, but I was taking a shot of a likely Tropical Kingbird (jury still out on that – need to get confirmation from Ron), when the Dove you are looking landed about 10 feet away.  I have a lot of Doves checked off my list and since the one I was missing (yes, the Common Ground variety) wasn’t circled, assumed it was one I had.  Took a few crap-ass shots and then went back to trying to get the Beast locked on to an uber-hyper Tropical.  While working in the digital darkroom, I noticed the features of this Dove specimen.  Scaly neck pattern but not edged out like the Inca (link here).  It also had a multi-colored pink-based bill and the long splotches adorning the sides.  A quick dash to the reference books revealed the hunch – this was indeed the Common Ground-Dove.  That brought a HUGE smile to my face and an instant call to Ron – having already checked this bird off his list (thanks to some helpful Chicago birders) he had been holding it over me, taunting me on nearly a daily basis.  I had finally erased that advantage albeit with a lot of luck.

The next time we end up there, I’ll be sure and circle this Dove and hang out there until I get better shots for my loyal readers to enjoy.  Note, you might have just heard a giant groan coming through your speakers – that would be Linda … don’t make eye contact, don’t make eye contact, don’t make eye contact hehehehe.  With the limited shots, I need to get to some factoids before wrapping up the post.  The Common Ground is a relatively tiny Dove species.  Cornell claims it ranges between a House Sparrow and a Robin – my specimen was on the larger end, but it might have been fluffed to combat the unseasonably cold day.  Similar to other Doves, the Ground has the ability to swallow water without needing to raise their head – I am pretty sure that little tidbit will NEVER come in handy during the entirety of your remaining time on this planet.  They spend a large amount of time on the ground (genius name right!?!) and therefore rely on their ability to blend into dusty terrain to survive.  Let’s hope they know how to conceal those bright pink legs which look like a neon “Eat Here” sign.

Thanks for bearing with some bad shots, but I needed to feature this Dove in order to get my official check and stop the daily harassing phone calls from Ron.  One more day of work this year so hopefully my blogging production will start picking up.