Getting tired of the run posts yet?  If so, my apologies for this one and well, likely the next one too.  The good news, is when that next post is done the official running season should be done.  That is if a trail race doesn’t catch my eye in the next couple of months.  The great thing about being trained up for the 4 half marathons that closed the standard race season  is you are pretty much ready to go if anything at that distance comes along.  Will probably cycle back to maintain mode for training and start working more on getting the body fully recovered from another grueling year pounding pavement and new for this year.. the dirt.  Guessing if you read the previous post, you are wondering how the final piece of the 2 race event went. 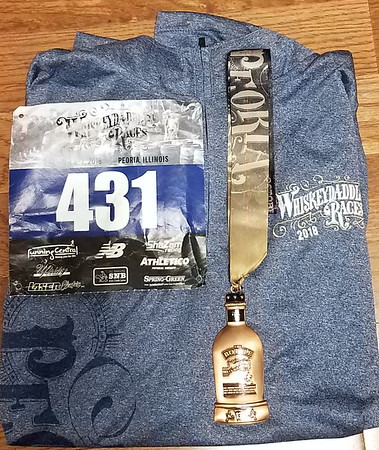 That pretty much gives it away – successfully finished the back half of the challenge.  I forgot to point out that the 5K actually gave a really nice and classy looking long sleeve tech shirt very similar in design to the pull over they gave for last year’s half.  This race is on the expensive side when you sign up for the double event.  It has the absolute worst after race party outside of the typically much much lower budget trail events. Basically provided water, a few bagged snacks, a loose cookie and a banana.  Really bummed this year they were not giving out the free Whiskey samples like they did last year (yum).  I can get over the weak food offerings thanks to their incredible medals.  They are just slightly smaller than last year’s barrel version (link here), but still nice and heavy.

Hit the jump to see if I survived another half marathon!

Once again they were predicting big rains for race time.  Although the rain had held off for the 5K the day before, it rained cats and more cats that afternoon and continued on through a majority of the night.  Resigned to getting poured on, I took the traditional 50 gallon trash bag to at least keep the core dry while waiting for the start.  Turns out it wasn’t needed on Sunday either.  Overcast and slight mist for a few minutes at a time  – no problem.  The humidity didn’t seem as bad as the day before lending to some guarded optimism at the starting line.  A few years back I set my Half PR at this race thanks to it being unusually cold (and trying to save face against a 14yr old hehehe).  Didn’t plan to duplicate that feat, but there shouldn’t be violent puking episodes like previous years at the Moonlight Race (link here). 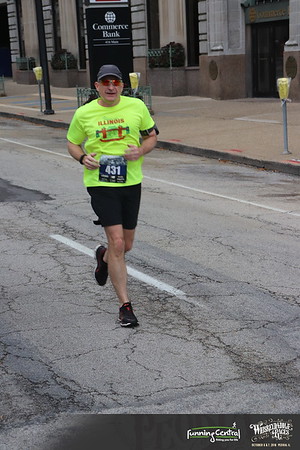 The tall lady that was planning to find me either didn’t show or couldn’t find me.  Probably my fault since I prefer to keep a very low profile – while wearing a fluorescent yellow shirt (just so the paramedics can find me quicker when I’m lying on the ground).  My personal photographer was once again running our dogs in an agility show so no pre-race shot.  However, this race does provide their own photographers scattered around the course.  Very appreciative of that perk and impressed that they provide the images to us for FREE – well, they do tag it with the sponsoring store (remember them) and the race logo.  No worries, I’ll take that for free shots any day! 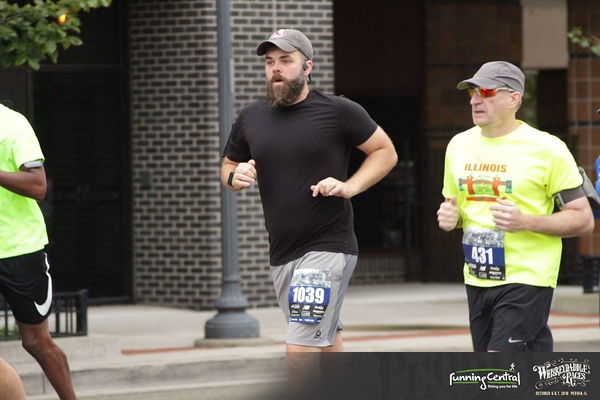 This year, the race organizers changed up the course.  Our local police decided to increase the charges for policing intersections and closing roads.  This resulted in the full marathon being changed from a single loop to a two loop with slight variations.  Not a big fan of that especially that distance – means you run a half, get near the finish line only to be directed back out for another 2 hours+.  Since I was only doing the half, this didn’t come into play. The other change is they took us into the Springdale Cemetery –  I am veeeery familiar with that place since it is my training course and the site of the IVS race a few weeks before (link here). They decided not to include any of the three hills in that cemetery leaving just the large Main St. hill as really the only challenge on the course outside the slope out of the cemetery.  That may sound good to other runners – not Mr. Hill here.  All that means is WAAAY to much flat which I hate.  Nothing tears me up more than mile after mile of flat.  Okay, I will admit, the long down hill for mile 12 is pretty sweet.

Race went almost perfect to plan beyond the slightly slow start trying to fight my way through the crowd again.  Mental note, start a bit further up next year.  Their splits are a bit long causing some deviations, but according to my Runkeeper I ran a perfect negative split race (every mile slightly faster).  Often a goal, rare that I am able to pull it off for races this long.  More importantly, passed every member (that I was able to spot) of that running group highlighted in my 5K post – we all need our motivators. 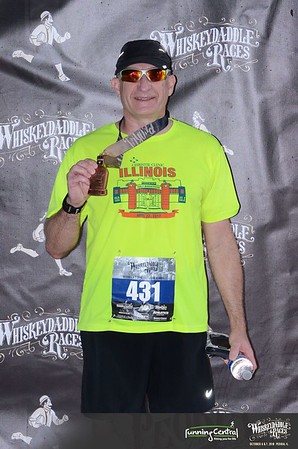 I like how they give your official race certificate using your gun time NOT! 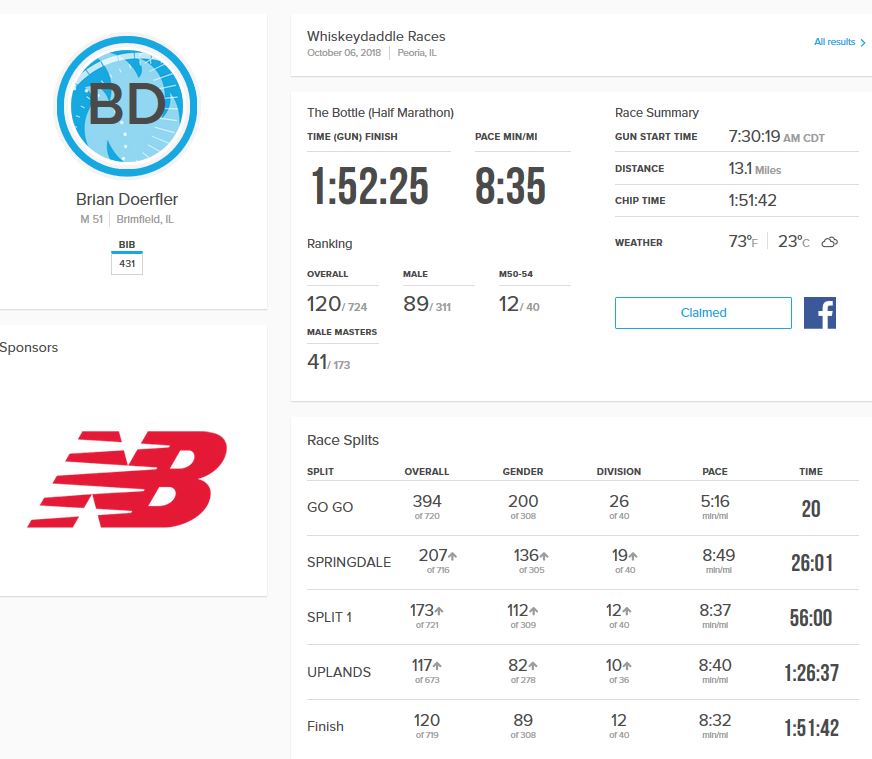 Okay, now time for the big pay off! 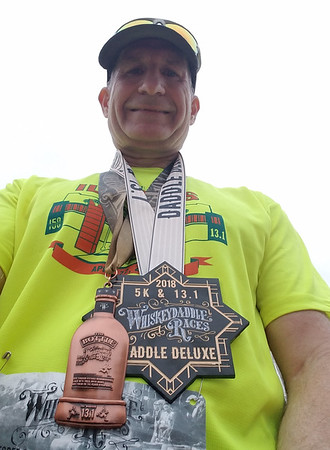 SUUUUUUWEEEEEEETTTT!!  My trail friends wanted to know why I wasn’t doing the mega Farmdale trail race that weekend instead.  Let’s see, race a half on an extremely muddy course and maybe get a medal if I manage to place in my age group (which later learned they didn’t even give those out)… or run two races on wet pavement and get … wait for it .. wait for it…

One, Two, …THREE Medals!  Yeah, pretty much a no brainer to this medal whore (as my wife calls me).  These are not your run of the mill trinkets, rather beefy medal statements that you came, you saw, you ran your ass off.  Maybe you are not getting the proper perspective 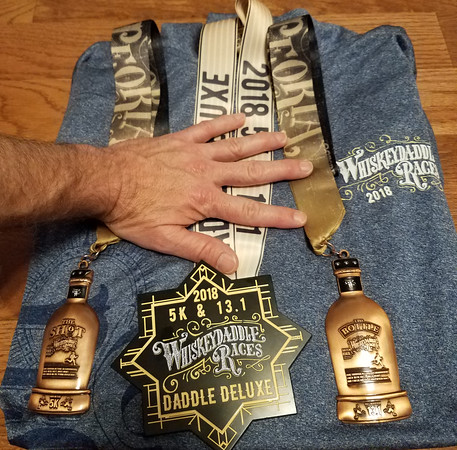 The extra race for completing the 5K and the Half (middle one) is smaller than last year’s (which was square), but still very respectable – the Illini triple medals had more character at the cost of being a lot smaller.  Go big or stay in bed.  Speaking of bed, think one is calling my name.  Another run in the books and three more medals hanging proudly from my medal whore .. oops, medal holder.