Things are finally humming here at LifeIntrigued.  With almost all of the stressors that were queued up for September and October finally behind me, the blog can get some badly needed love.  Just have a big speech coming up (will talk about that more when we get closer to the date) and a few other odds and ends to get cleaned up and I’ll finally be able to sit back, relax and breathe a huge sigh of relief.  One of those big stressors just got completed yesterday.  It also had a running theme and the reason I am pushing so hard to get current all my competed runs that have been sitting on my desk since July.  Sticking with the chronological order, going with a run that took place after the IVS Half from last post. 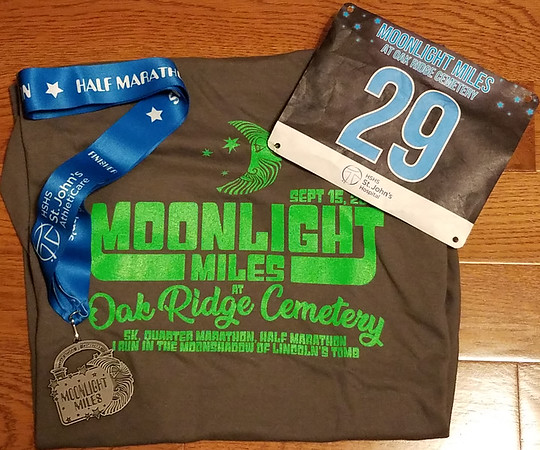 Now this run holds a special place in my heart… err, make that my stomach.  It is also the race that gets my wife the most concerned – that may be rightfully so.  The race is held 6 days after the IVS half on a Saturday night.  The race started out as a prediction race in the same vein as the Screaming Pumpkin race (link here).  In fact, so similar in that it also started out as a Marathon distance with relay options and held ..wait for it .. in an old cemetery.  It was a natural fit for our seasoned Pumpkin relay team.  Unfortunately, they backed off the prediction element, but added a half and quarter marathon to accommodate the shorter distance runners so they wouldn’t have to partner up.  Last year Ryan and Sung were able participate with  me, much to the relief of my wife (link here).   She is responsible for a dog competition event that weekend and has been unable to travel down to the run.  This is also the reason this race brings the biggest concern.  Why? Well, for two years in a row I’ve left a bit of myself there.. and not talking about sweat.  Something about this race ends up getting to me around the 9 mile mark that ultimately causes me to be seriously sick after the race – like throwing up sick.

Hit the jump to find out how the race turned out!

The first year I threw up multiple times after the race and then at every exit between Springfield and Brimfield.  Last year was better, but ended up getting sick as we left the park and then at one exit on the way back – hey, that’s progress!  Big thanks to Sung for driving me back last year.  This year, Sung was not able to go, but thankfully Ryan was up for the quarter race (think Linda may have bribed him).   It also hasn’t helped at all that they moved the starting line of the two loop race on top of a steep hill – seriously race directors, did you really  need to make this race any harder?!?   You might be able to tell from the pre-race shot above there was definitely some doubt swirling around the noggin.  Also take note of their stupid timing system that requires me to wear an ankle device – will comment on that later.

The race starts with one loop in light and the final loop in darkness.  No ambient light in Oak Ridge Cemetery so it is really really dark on that second loop.  A light device is required if you have any hope of finding the course markers.  This is a wicked, convoluted pile of squiggly lines that require concentration not to get lost.  We had to call back a rabbit that tore out ahead of us only to miss the very first turn – he still crushed the field to win the overall.  Halfway through the first loop the lead pack missed another loop back and none of the spotters caught it.  In an attempt to keep it even, they had everyone take the same path which ended up cutting 3 to 4 tenths of a mile off the final distance.  They corrected it for our second loop (which added back in another wicked hill).  Around mile 9 started feeling the stomach get weird again – same as last year.  This time was able to push through after backing the pace down just a bit.  Mind you this course is much harder than even the IVS hills and that dumb ass climb to the start at the midpoint and the end is soul crushing.  Definitely felt fatigued, but crossed just under 1:58 granted, that was impacted by the slightly shortened course.

Ryan took a post race shot for me – happy that the run was over, but body took a beating – must try to drink more fluids!  That time put me 5th overall in the race.  I was hanging with the 4th and 6th place finishers for the first loop, but the 4th ended up pulling ahead of me on the second loop and the 6th dropped back around the 8 mile mark.  Turns out the 4th place guy was in my same age group – same age as a matter of fact.  He ended up being the 3rd male to finish (I was proudly the 4th).  They remove the top three from the age groups since they already get an award.

That left me FIRST in my age group.  Pretty cool.  Ryan also took first in his age group so awards all around.

You might have been asking yourself what that cup was in the finisher picture – last year they gave thin wooden plaques.  Got that for finishing 2nd in my age group – check this out … with a 2:19.  (Definitely improvement mainly due to no walking this time).  They replaced wood awards with the nice cups this year – much cooler in my opinion. 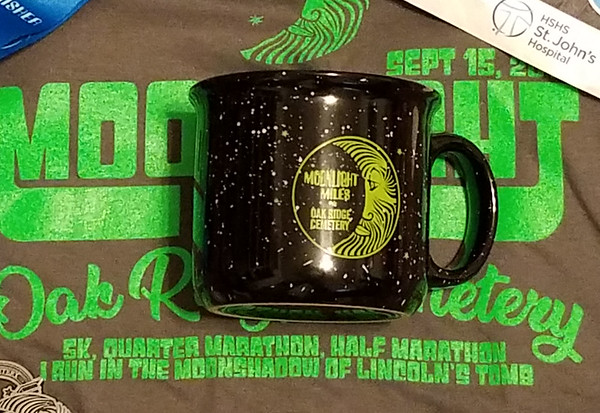 So, you are probably wondering how it went on the post race health.  First off, I had Ryan drive home — only as a precaution.  Although the race definitely took a lot out of me, everything stayed down – yeah!!!  I finally bested this damn race and redeemed my honor.  Big hopes for next year –  maybe go for third overall.  Oh, and Ryan did mention something that might have saved me. They actually had chili dogs as the post race food – a change from the pizza of last year.  Last thing I wanted to give a questionable stomach was a chili dog so opted to delay a bit.  When I finally decided that it might taste pretty good, Ryan pointed out that the lady putting all the dogs in the buns was doing it with her bare hands — eesh.  Decided to let the stomach rest instead for the uneventful/nonstop (thankfully/) trip back to Peoria.  Thanks again to Ryan for heading down there with me and putting my wife’s concerns at ease. One thing that did end up causing some pain was the giant gash the timing device put in my angle.  The sharp edge of the velcro cut into skin at the top and bottom of the band.  It was stinging during the race, but with all the other discomforts it went unnoticed until it was taken off revealing the cuts.  They have to fix that for next year, the days of not using timing chips that go on the back of the bibs has long gone in the runner world.