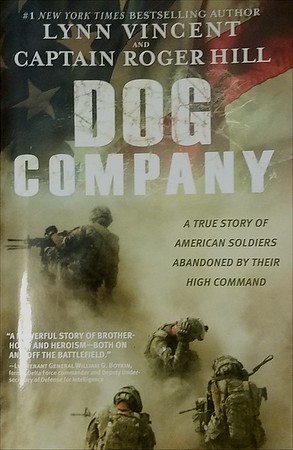 I need to get back in the saddle and start producing some posts.  July has been hectic to say the least with a hard trail run (sure to make its way here seeing as how it almost killed me), a vacation crossing the entire state of Arkansas, traveling to a final training run for a race at the end of the month and then a mad scramble to get our entries to the local annual photography competition.   Makes me tired just typing that.  Still no excuse to let my readers down.  So without delay, I bring you a recollection from a recent read – Dog Company: A True Story of American Soldiers Abandoned by Their High Command by Lynn Vincent and Captain Roger Hill.  It is no secret that the military has always been a favored read – check the recollections listing and you will see that most of those are related to our loyal men and women who protect our great nation and its values around the world.  Part of this is a deep desire to understand what it takes to put yourself in harm’s way – leads one to wonder how they would fare in similar situations.  The other part is my father was in the Korean War (yeah, I said war and not conflict, I have no time for semantic games).  I can’t even imagine what that was like for him, but each read provides a bit more clarity.

Today’s featured book described the completely ridiculous rules of engagement that were placed on our fighters in Afghanistan and assume applies in all our military theaters around the world.  The story focused on Dog Company from the Airborne 101st.   They had taken some serious injuries since being deployed (1/3 of the author’s men had been wounded in action) including some who ended up paying the ultimate sacrifice.  It is in the aftermath of that tragedy they discovered there were traitors within the wire – Afghan’s that had been hired to provide services (including their interpreter) were giving information to the enemy.  Thanks to the 96-Hour engagement rule they were required to prove guilt within 96 hours our they had to be released… and by released, that means returned to wherever they were captured regardless of how hostile that environment might be.  Needless to say, if they could keep quiet for that duration… they knew they had to be set free.  Can I assume the Taliban had a similar rule? – rhetorical of course. The release scenario had played out numerous times already (in fact, EVERY TIME) for this unit.  Out of frustration Captain Hill and some of his leaders took it upon themselves to accelerate the admission of guilt process through some direct physical aggression and a staged scene that included separating a group of traitors from the others and discharging a weapon to simulate an execution.  Too far, possibly, but I am not about to sit in the comfort of my den surrounded by peace and quiet and try to judge a situation against an enemy sworn to kill everyone that doesn’t believe in their self serving interpretation of a “religion”.  This event resulted in investigators being dispatched to gather evidence of guilt, the participants were relieved of command and removed from the fight.  What transpired from there should make every citizen who believes in our military (especially those in the line of fire) absolutely sick.  The authors were essentially put in a position of having to prove their innocence – a stark contrast on how our legal system is supposed to work.  Traitors were trusted over soldiers and years of outstanding service ignored in favor of bureaucracy.  Details provided in the takeaways below, but in short, plea deals were involved that left little room for alternative paths.

When it comes to specific decisions, one must look ahead to truly understand the quality of that decision.  A fact that has been abused by so many especially in politics who rely on those they represent (the American Citizen) to forget the event and limit future judgement.  Think Benghazi, crates full of hard currency sent to Iran, artificial red lines and treasonous email practices … and endless other recent examples.  In this particular situation, the quality of the decision can be assessed easily – the 96 Hour rule was rescinded in 2010.  The enemy has not changed, the threat has not changed and our military might has remained as vigilant as before the rule was removed – what did change was the rule getting press (you wouldn’t believe which “news” outlet – now fallen to level of comical) which forced the removal.  Just to add a couple points of commentary on the structure of the book before leaving you.  First, this body of work had to be submitted for review by the Department of Defense.  There were numerous redacts that the authors did not agree with and opted to leave the redacts (black bars) in the context of the book and let you decide if you felt that gap was justified or not (you can tell the context from the words that were left).  Secondly, the book weaves in the actual dialog from the military trail.  With the details in the story, you can see how the questioning was played out and understand the answers in context to that story – this provided an interesting insight to how those courts operate.  The authors stated it directly, but the dialog leaves no doubt – guilty until proven innocent.  Lastly, I thought the recounts of the enemy encounters were chilling to say the least.  Want to understand PTSD better, try inserting yourself into their situation and ask yourself how you come out the other side (if you even do) without being impacted emotionally.  If you think dishonoring our men and women in uniform by kneeling in protest because you don’t like the view from your million dollar mansion is appropriate behavior, then consider yourself and your industry dead to me.

Hit the jump to read some of the details of my takeaways.

2 thoughts on “Book Recollection: The Enemy is Within”