Halloween is nearly upon us!  If the day itself isn’t scary enough, the fact that it is officially the last day of the month sends shivers down my back as I have to check my quota for the month – 1, 2, 3, 4, 5 … whoa.  It appears I am down a post and my fears are realized.  Normally this would be more of an issue, but to be honest, I already had the topic and the related images worked up. Just needed to put some letters together and punch my ticket to the next month. 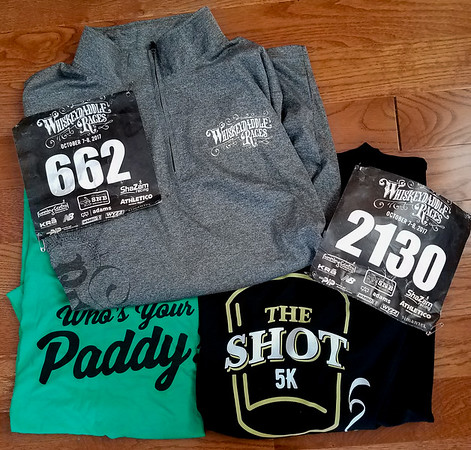 The WhiskeyDaddle was held the weekend of October 7th in downtown Peoria, IL.  Technically this was a new race for me and the inaugural running for this event.  In actuality, this was more of a rebranding of an existing race than an entirely new one.  I had run the previous October PNC Marathon races a couple of times opting for the half distances each time.  The race coordinators (Shazam Racing) decided to transition this race to the WhiskeyDaddle to give a local flavor to the event. If you did not know, Peoria played a large part in the prohibition years in relation to the local Whiskey distillery.  The race now has a Whiskey theme to it and they changed the course up a bit.  Now you start in a different location and end on the river front instead of the civic center.  I like to think I had something to do with that having completed several surveys encouraging them to move the finish line to a new location – absolutely no reason to waste the money to end there – the seats were mainly empty and it felt like a morgue. In addition to making the slight course change, they also added a pre-race 5K similar to the Illini Marathon.  Compete in both and you get a third medal.  If you know me, you know there was no way I was going to pass up the opportunity to get THREE medals.

Hit the jump to learn how this race turns out.

Look at those beauties!  Totally impressed with the hardware this year. Definitely the best 5K medal (far right on the picture) I’ve ever gotten for such a short distance.  They upsized it for the half marathon (middle medal) and if you successfully completed both, they gave you a dinner plate as Linda refers to it.  If you completed the 5K and the Full Marathon, you got a larger plate – at least 2 inches bigger.  Needless to say, there might be an October full in my future come next October (shhhhhh, don’t tell Linda).

Almost forgot to mention the swag was mighty nice as well.  The 5K brought with it the nice long sleeve black tech shirt.  The Half Marathon runners (and the Full) received the zippered pull over.  The 5K shirt is a nice replacement for the Screaming Pumpkin long sleeve tech shirt which is now officially canceled.

Kind of getting ahead of myself – already talking about the hardware and I haven’t even mentioned how the races went.

I took the same philosophy as the 5K before the Illini Half Marathon.  Not too much science here – simply DO NOT get hurt.  These short races really do not interest me anymore and quite frankly would skip it except for those sweet medals.  My general rule is never drive longer to local races than it takes to actually run the race.  Hauled myself out of bed early Saturday morning and checked the weather – thank god it was on the cooler side again.  Concerns were still lingering from the aftermath of the Springfield race (link here).  Another reason to take it easy.  If you didn’t notice, we are sparse on photos today.  My personal photographer was busy showing our dogs in an agility show and wasn’t available to document the moment – bummer.  I made my way down to the race location, carried out my standard pre-race protocol and took my place near the back of the starting line.  No need to get caught up in the individuals looking to push the legs that morning.  Special note to race coordinators – the porta-potties were waaaaay to far from the starting line.  Recommend getting that corrected for next year.

From a race perspective, pretty routine.  Purposely kept my pace in check and simply enjoyed the scenery. My slow pace ended up being faster than the place I ended up selecting to start at which meant navigating around a number of other racers until I found myself in the right pocket.  Once there, the cruise control was enabled on the shoes and basically coasted all the way home.  Took 7th in my age group and honestly wasn’t even trying.  Once across the finish line, walked a ways back to a small table where I gathered up a banana, a cookie and a bag of pretzels before heading back home get the legs prepped for the big day tomorrow.  There were a number of other WhiskeyDaddle events planned that day, but those didn’t interest me as much as the chance to rest the legs. 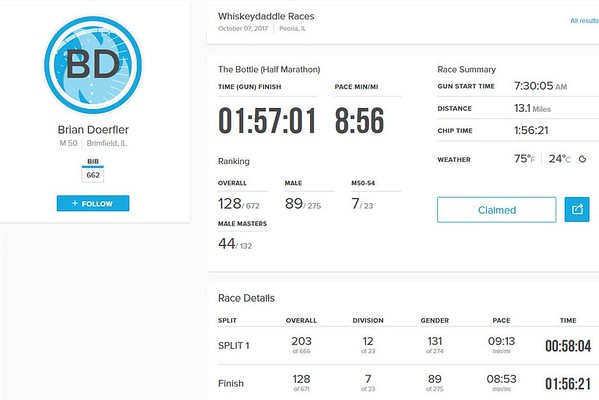 Sunday came and repeated the morning race day prep.  Headed downtown, parked in the same spot (like to keep my life simple) and though I had properly timed the trip to the porta-potties taking into account the distance from the starting line.  Answer to that was a big fat NO.  As soon as the gun sounded my body informed me it needed some extra attention – uggghhhh.  Decided to get that taken care of in the early portions of the race – best laid plans never to fruition thanks to either a back log of runners or the inability to find them.  That was more feedback on their post race survey.  No worries, just struggle through and tried to focus on making sure the issue in the Springfield race didn’t emerge.  I did change my fuel strategy opting to take extra carbs every 3 instead of every 6 miles.  That coupled with the cooler weather did the trick.  Summary – a perfect race.

Ran negative splits to the midpoint where the big hill was and then proceeded to run negative splits to the finish line.  Even ran the second half faster than the first half.  No complaints and felt good after the race for a change.  Not my fastest Half Marathon, but really happy with the execution.  Also dismissed the heat exhaustion concerns lingering from the previous race.  Oh, and officially ran the THIRD configuration of that race course in as many years.  This one was my favorite of the three having limited the number of up and back subdivision roads the first few had.  Nothing fun about zigzagging back and forth through a bunch of neighborhood streets.

Once across the finish line, it was another long walk to get my banana, cookie and yes, another bag of pretzels.  This time I also picked up my cool plate for successfully completing the two races.  While wandering around the event area, I stumbled upon free whiskey samples.  Now that is something new.  Grabbed myself a sample of blackberry whiskey – yum.  That might have even been better than the post race wine at the Michigan 13.Wine race. 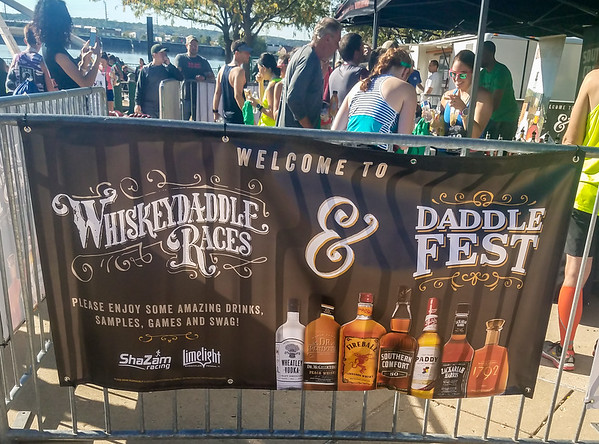 They also gave us free shirts – If you look at the swag shot at the beginning you will notice the Who’s Your Paddy shirt.  Since I know Linda will comment on this, I did originally think it said Who’s Your Daddy – hey, give me a break I had just run 13 miles hehehe.  Based on the medals alone, I will definitely have this race back on the list for next year.  With this race, the season is officially ended.  Time to rest up a bit before starting up training for next year’s racing circuit.

That’s a wrap everyone.  Happy Halloween if I don’t get back to you before then!