It’s race time everyone!  Umm, well, actually it has been race time for a while now.  Been a little busy and the running posts tend to take a healthy bit of time getting the race day pictures processed, getting the swag photographed and then tracking down the official results.  Because of that, the race posts tend to be pushed down the queue.  Normally I’m a race or two behind but rarely 3 races, yet that is exactly where I am at ugh!  Having just completed a training run for a race at the end of the month thought it would be prudent of me to get some of these popped off the queue or face falling 4 behind which is complete insanity.  So, without further delay say it with me I-L-L

If you didn’t immediately respond with I-N-I then you did not attend my Alma Mater and for that I am sorry hehehe.  Why a shot of my stadium’s scoreboard?…well, that happens to be where the first race of the season occurs.  Each year most of the way through the month of April a hardy band of runners head to Champaign IL to test their meddle against the racing gods… and more ominous, the weather gods.  They call this race the Illini Marathon and for those of us who like a little spice with our athletic competitions, the Illini I-Challenge. 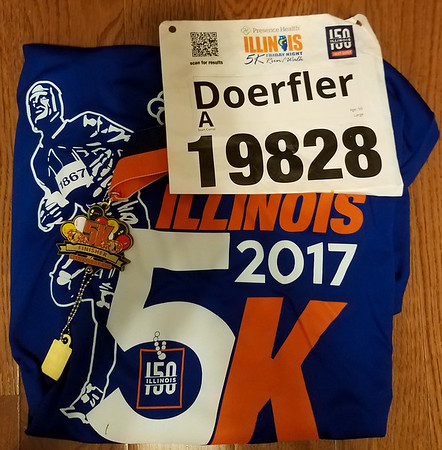 Hit he jump to see how this race turns out

This race will always hold a special spot with me, because of last year – if you recall, this is where I put a check mark on the 26.2 entry in the life list.  That year was the Full I-Challenge where this year I went with the Half I-Challenge.  5K on Friday night and then the Half Marathon the following morning.  The trick to this is NOT doing any damage to yourself in the 5K or you can pretty much say goodbye to two-thirds of the medals (oh, did I mention you get THREE medals!?!).  There is actually another aspect of this race that can cause additional discomfort – for three years straight it has rained.. not just rained, more like hurricaned.  Constant sheets of rain dancing in 25 mph winds.  This was documented previously in my Marathon post (link here).  Sure enough the lead up to the race shows rain and wind – dammit.

However, as the race day neared, the rain forecast started to fluctuate – sometimes in, sometimes out, but the wind wasn’t going anywhere.  By race day, the weather started turning cold – rain and cold is not a combination I enjoy racing in.  This was quite the concern while trying to figure out what to wear that night.  As always, I came prepared for every weather condition imaginable – just need to decide how many layers for optimal mid-race temp.  A final check of the temperature sealed it – it was going to be 48 and below and NO RAIN.  With the hard part out of the way (the clothing decision) all that was left was to toe the line and take an easy glide through the 5K.  Yes, my personal photographer was there to capture the intense start of the race hehehe intense for everyone, but me.  Way too many serious faces for a little ol’ 5K in perfect weather.

Truth be told it was TOO perfect of weather.  After a mile I was feeling really good.  My pace was rocking through the splits and the legs were feeling great.  Someone inside my head said go for it and the body complied.  Pushed it as fast as I could to the very end completely forgetting about TOMORROW.  I crossed the Memorial Stadium 50 yard line with a chip time of 23:46.  My second fastest 5K ever.

Joy turned to concern soon after.  Linda was supposed to be waiting in the stands – she was nowhere to be found.  Tried calling her a couple of times without answer.  Serious worries of something happening to her on the way to the stadium took over while scanning the bleachers.  Eventually, she was found under an area to the side of where she was planning to be.  With that big relief came a bigger wave of terror – so focused on Linda, completely forgot about working the acid out of the legs – by now they were seized up like concrete mannequins.  I could barely make it up the stadium stairs to the exit and had to rely on Linda to help me hobble back to the van.  The euphoria of running a near record 5K was out of thought by now replaced with doom and gloom of having broken my golden I-Challenge rule.  The rest of the night was spent massaging in Bio-Freeze and grinding out the legs with a Tiger-Tail.

I’ll leave you hanging on how this turns out for the upcoming Half Marathon post, but it was going to take a miracle to even be able to walk to the starting line with less than 9 hours left.