Welcome to April everyone!  Bonus time is now replaced with monthly quota time so I get to start the trek to 6 posts once again.  Figured I could at least get one out of the way seeing as how I’m just sitting here trying to recover from a difficult training run this morning – first of the young season two loop pass through the hills of Springdale for a healthy 13 miles (also took the second loop in reverse to make sure the legs were totally drained by the end).  I also know my brother Ron is out trying to add to his bird count right now so opted for a devious subject 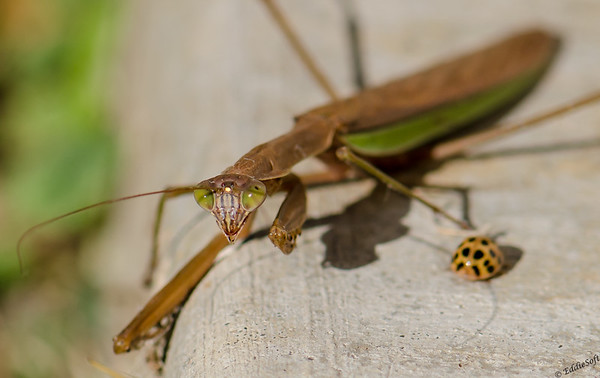 I know for a fact that Ron is not fond of the Praying Mantis based on his decision to wait an extra month to turn the page on our EddieSoft Gallery calendar so he could skip looking at the one we selected for our annual product.  You can view the previous featured post on the Mantis back in Sept 2010 (link here).  Note, the Mantis shot from that first set added a blue ribbon to our collection (link here).  Hoping that after viewing this new set he might be in enough trauma that he will prefer to stay inside rather than risk a personal encounter – ha.

Hit the jump to see a few more creepy pictures!

This specific specimen was spotted trolling our porch back in October 2014.  The unique thing about this one was just how big it was.  Normally I see them in the 4-5″ range.  Unfortunately, I do not have a reference for you, but this one was definitely in the 6 inch range.  It also has that dominant brown coloring as opposed to the more commonly seen full green – this prompted an immediate suspension of what I was doing and a quick run to get the macro. 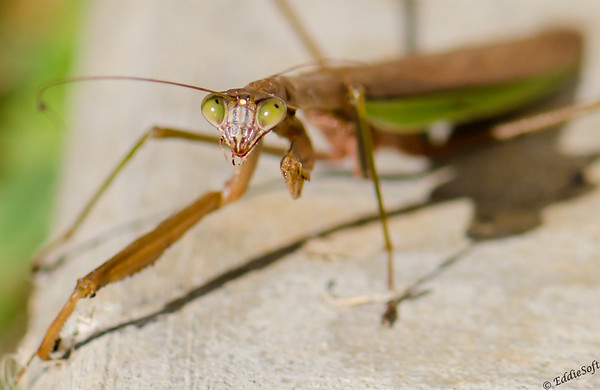 A look on the net indicates that the brown vs green coloring is genetically controlled.  The research I read (quickly) indicated that the common coloring for a particular region is selective adaptation – my words for how well the surroundings fit a given color pattern.  In lush environments the green variety fits in better and conceals from natural predators – more brown environment … well, you get the picture.  This one would have been difficult to see in the grass and our wooded acreage, but on the light gray of the cement it was easily spotted.

For the most part it was fairly forgiving of my distraction to its hunting routine – the reference materials indicated they hunt ALL DAY long.  Makes me out to be a slacker seeing as how I’m just sitting here in a comfy chair with my feet up.  Here is an interesting question for you – how many eyes do you think a Mantis has?  Did you answer two (like I did)?  If so, you are wrong.  They do have the bulging eyes on the sides, but they also have three simple eyes in the middle that provide finer tuning – Through these eyes and placement they are very well tooled for stereo vision.  The outer eyes are used more to detect movement with a wide field and then they move their head to allow the inner eyes to focus.  Since we are focused on eyes, you may have noticed from the closeups that you can see the pupil in the large eyes.  Turns out this is referred to as a psuedopupil.  Their eyes are filled with ommatidia which contain the photoreceptor cells. Those head on to the viewing angle capture light where those to the sides actually reflect the light – absence of light is black (or full absorption of color depending on your understanding) and thus the resulting pupil like black dot.  You can thank me later when this comes up on your favorite crossword puzzle. 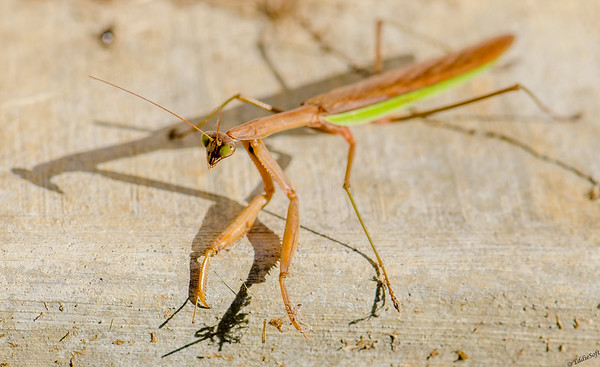 Having made to the end of the pictures, figured I would depart one more interesting fact.  The Praying Mantis doesn’t really have a very long lifespan – basically one season in the wild.  They females will mate with the males in the fall and supposedly kill the male afterwards – talk about pressure – perform or I will decapitate you.  I will note, that this fact seems to have some varying levels of accuracy.  Some references pointed this out as an unconditional fact, others indicated it was mostly viewed in captivity rather than the wild and still others alluded to it being a rare behavior.  The female will then lay their eggs in a hardened foam like encasement in the August timeframe only to die a few weeks later.  Being that is was shot in August I am thinking this one was about at the end of its short life on this earth.  So goes the circle of life.  Don’t worry, this one like all my photographic specimens was left unharmed after my brief encounter.  Besides, why would I ever do harm to a creature that has a food preference for the same pesky insects I hate!

I hope you enjoyed seeing my intriguing visitor!

2 thoughts on “My What Green Eyes You Have”