Figured it was time to post one of my recent projects.  Although I have not featured a project post in a while, I’ve actually been pretty busy with all sorts of construction efforts.  Most of them have been focused on finishing up Project Auuuuuurrnnnoooold – almost there, all the main work is now done, but I have some finishing touches that need to get banged out to finally but a bow on that multi-year endeavor.  Fortunately, today’s featured project was much quicker from start to finish.   Introducing my latest concept – the Posey Limb Containment System or PLCS for short. 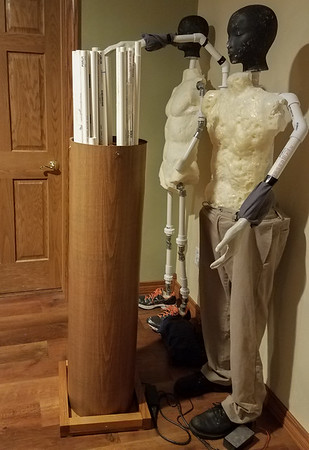 PLCS is my fancy name for PVC pipe holder – ha.  For most of the year, I usually have piles of pipe laying around for all the Posey’s that are under construction.  It wasn’t a big deal until I got the basement remodeling work nearly finished up – Linda didn’t think it went well with the new decor.  This hurt knowing that each of the Posey’s are basically a work of art which in my mind just upped the classy factor.  Figured this was not a battle worth fighting so opted to get a bit more organized.  I need to give a shout out to Pinterest for providing the basis for the concept.  Someone posted an idea to store long and thin pieces of wood by simply bungie cording a cement column form between ceiling joists.  The new finished ceiling pretty much nixed that idea, but that got me thinking – why not make an upright freestanding version.

First order of business was to make a base.  Key requirement is it had to be pretty heavy to keep from falling over.  Due to having to resolve some framing issues with a few doors in the basement, I had some 2″x2″ solid oak lumber left over – perfect – heavy and would match the rest of the trim in the basement.  Now just a quick run to Menards to pick up a 4’x1′ circular column cement form and went with another 2’x4′ clear solid oak board for the base – again, both nice looking and heavy.  The form was simply set on the base board and the 2x2s placed tangent at the four compass points.  Drew some quick lines on the outside of the side blocks provided the cut lines for the table saw.  To cut the post down a bit, a number of interim steps were omitted, but here is the base and sides attached. 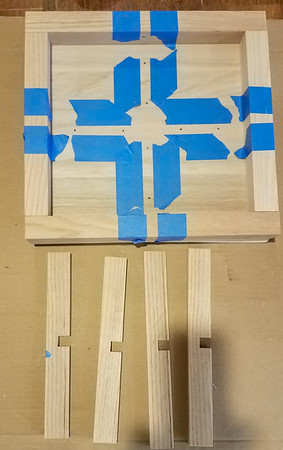 Hit the jump to see some notes on how I put it together.