It’s another day of playing catch up here at Life Intrigued.  In the same pattern as the last post, this one comes from the draft queue – Yeah, I’m taking the easy way out but I’m dragging today having completed my first outdoor hill room of the young year.  Only ran a little over 6 today, but it was a struggle thanks to all the black ice that was doing its best to put me on my ass.  Only lost traction a couple of times, but the required shorter stride only added to the burden.  I still miss being in Texas a few weeks ago, so to help bring back some fond memories, going with another post from our November 2013 trip. 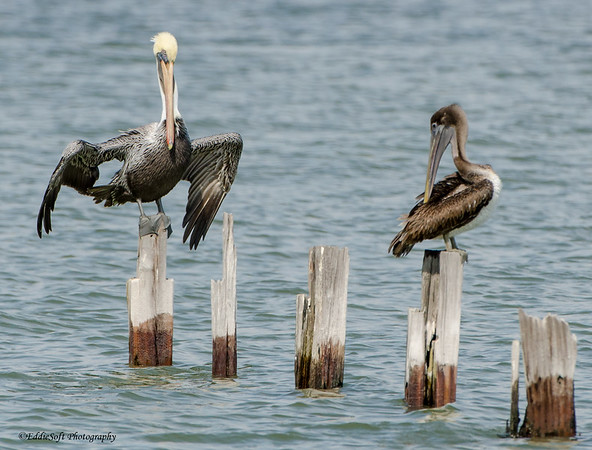 These shots were taken at the Aransas National Wildlife Refuge in Austwell, Texas.  That was our target destination back in 2013 and more of a side stop for this year’s trip down there.  Of course, we were down there for the chance to get the Whoopers (link here).  After that, everything else we got down there was just a bonus.  I already had the Brown Pelican from the Ft Myers trip (link here), so no +1.

Hit the jump to see a few more shots of the Brown Pelican.

However, I we did get to witness these two hanging out together.  We came up on them while taking a small hiking trail off the main road into Aransas.  I cannot remember the exact name of the trail, but it was pretty short – I know this because anything very long would have put us in the hospital for blood loss.  Those damn mosquitoes out there are adult sized vampires.  You could feel your veins collapsing from the vacuum if anyone successfully speared you.

From what I can tell, this looks like an adult breeding specimen (on the left) chumming it up with a juvenile (on the right).  Perhaps an aviary version of robbing the cradle.  From a shot perspective, this was a struggle with the Beast.  I opted to lead with the first photo because it lets you in on a little secret – they were farther away than you might initially guess from these other pictures (which I like more).  Thanks to some clever angle work I was able to get the two where I wanted them – problem is I was having to work the Aperture to get that distance in focus.  I could tell I was experimenting while I was in the digital darkroom – some shots had the mature one in focus and the other not, then the reverse, then nothing in focus and then a few that were close enough to go with.  I need some more practice in the smaller aperture space – spend most of my time trying to push that shutter up to get the speed I need to freeze the frame – which usually means I’m going as large as I can on the opening. 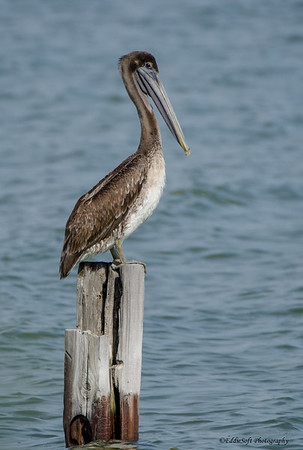 Then there’s the option to go ahead and maybe merging a few photos to expand the focus.  To be honest, I usually refrain from doing things that major just from an integrity perspective, but if it is just for our gallery (as in not for competition), I’ll take a lot more liberties.  The shot above and below were the best of the singular shots which are pretty good, but the interaction shots are always more interesting – especially with the record player pouring out a romantic tune (Pelican’s haven’t switched to MP3’s yet), the calming slow crash of the waves and a nice bottle of Moscato from the local winery – yep, this Pelican is smooooth.

By the way, I laugh to myself every time I see their little padded feet bent over a perch – they look like itty bitty ping pong paddles  We didn’t have much success at Aransas this year.  We may have shot a couple of Whoopers, but they were way too far for anything worth showing you.  In fact that is my biggest beef with Aransas – they put the observation tower way to far from the action.  If you are not carrying at least 600mm or more, don’t even bother taking your camera if you are only looking for wall shots.  You are not going to get them there. 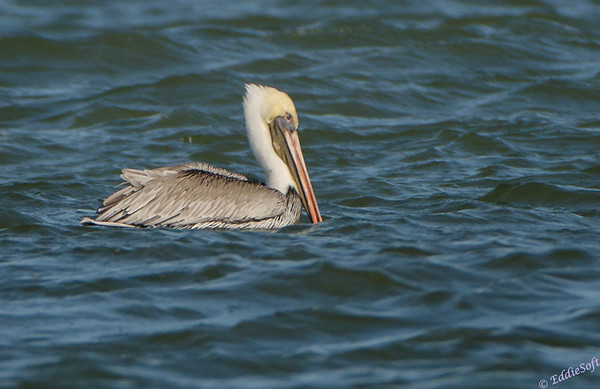 We caught the Whoopers on our way down there at another location (exact same place we found them last year) – this stop was just to see what might be there.  We did see an Alligator hanging out in the same spot as last time, but other than that it was pretty much a bust.  The most annoying part is we could not take the auto-tour loop because they put a restriction of 8 feet on the vehicle height – we are 9.  We thought about doing it because we didn’t remember any height issues when we were there previously with our Sequoia.  In the end we opted to just leave.

Pretty much done with Aransas now – too far away from the action and now we can’t even experience all they have to offer thanks to being 1 foot too tall.  It would be different if we didn’t know there was a better location to photograph the Whoopers.

That’s all folks – hope you enjoyed looking at the Brown Pelican.  If you behave yourself, I might have another post featuring the Brown Pelican from another interesting perspective.  Take care all and if you are bracing for tomorrow’s ice storm like we are, stay safe!

2 thoughts on “How Now Brown Pelican”