Greetings everyone from the Midwest Tundra.  In the midst of some bitter cold, sleet and snow at the moment in direct defiance of Never Colder’s who are still crying from the loss of their precious hockey stick graph.  Don’t you hate it when the data doesn’t align to the narrative.  Speaking of crying, anyone see the last press conference by Bumbles this week.  Let’s see, it is the press’s fault, no wait, it is the talk radio pundit’s fault, nooooo I remember now, it was the Ruskies fault for exposing a rigged DNC nomination process, collusion with the mainstream media, forcing CNN to give Hillary pre-debate questions and for brainwashing the Hillary election committee to ignore fly over country – the sneaky bastards even hijacked Hildebeast’s speech and stuck the word deplorables in it.  Them be some sneaky cold war enemies.  Tell you what, let’s throw in some Bush blame and just give it to Hillary – that way, everyone will be happy. I couldn’t write better comedy if I tried.

How about we move to a count that can’t be debated.  My North American Bird Life List count has been incremented by one thanks to this lonely specimen.

Truth be told, I am jumping the gun just a bit here since my validator has yet to respond to my identification request.  Fortunately, this particular waterbird is pretty easy to identify.  Here’s a better angle that gives a good view of the key feature they are named for. 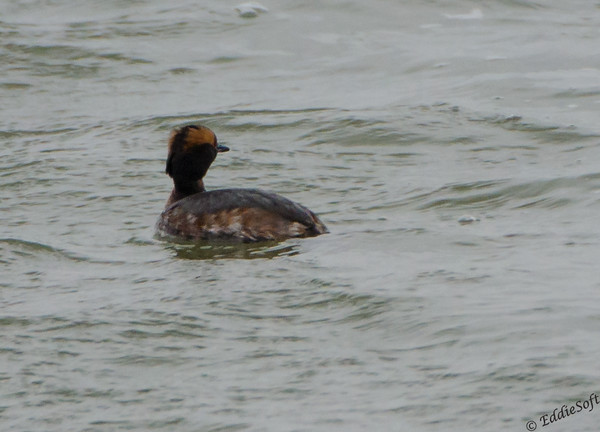 Hit the jump to see a few more pictures of this intriguing water bird.

A quick look in the bird reference confirmed that this specimen is a Horned Grebe.  It was shot back on March 29 across the Mississippi river from Alton, IL.  To be specific, this loner was shot on the Alton Slough from Riverlands Way road that fronts it until you come to the dam.  If you are down that way, I highly recommend taking a drive through there.  Linda gets credit for finding this place.  We end up down by St. Louis on a regular basis – catch the Blues, do some shopping, feed those hungry video poker machines and enjoy tasty QT black cherry slushies.  As an added adventure, she found this wonderful birding location. 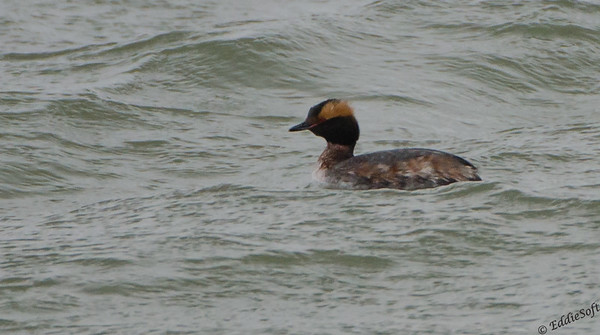 Admittedly, we have been there a couple of times when the pickens was a little thin but when that place is on.. it is on.  It is always full of Pelicans if you have not checked those off your list yet – especially down at the damn.  However, the good stuff is usually just floating not far out from the shores along the road.  There’s usually Coots exploring the water’s edge but my recommendation is to focus on the loners out on the water.  Those are the ones that generally produce the +1’s in your check list.  Case in point, this adult breeding Horned Grebe was enjoying the waters completely solo. 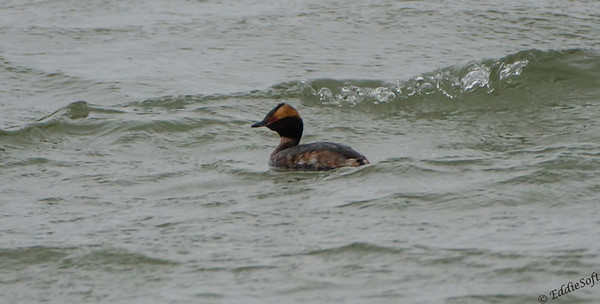 A quick look at the reference books discovered these Horned Grebes spend their winters along the coasts and mostly in the Southeast.  Their summers are spent exploring a large swath of Canada including Alaska.  That leaves most of middle and upper US as a migratory path between the seasons.  Seeing as how this was March I am guessing this one was on its way up to Canada and opted for a little rest and wing stretching. 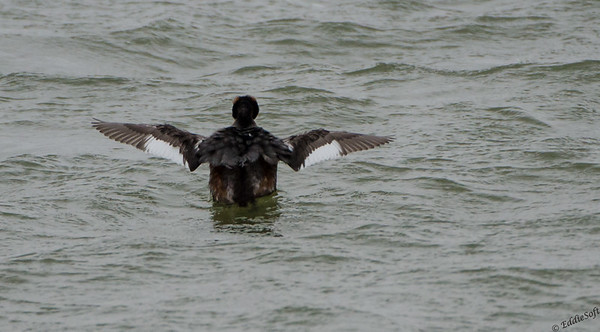 That’s it, get the kinks out of those wings and loosen up those joints.  Oh, and thanks for giving me a great shot of their upper wing feathering.   Always easier on the ID front when you have a variety of angles to consider – contrary to what my brother Ron seems to think, I do try my best to to get multiple perspectives. 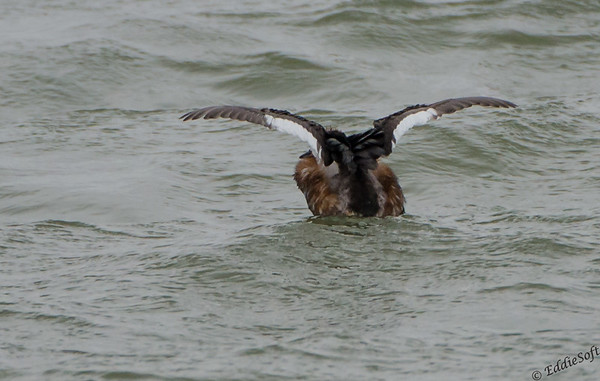 Looks like I only have one more picture so let me track down some facts before we put a bow on this post.  First off, they can actually raise or lower the horns at will.  I’m imagining some kind of Groucho Marx wave of the eye brows as their signature pick up line.  Take a big puff on a cigar, slowly exhale the smoke with a wave of the horns followed by “You migrate through these parts often Missy?”  They are surface divers looking for fish, crustaceans, and other small inhabitants of the waterways.  The parents also carry their young on their backs – this is the signature shot I have yet to get in the tin.  One of two actually that I’m trying to accomplish on my many outings.  One being Swan couples making a heart with their head and necks.  The other is any mother carrying their offspring on their backs.  One day, one day!

That’s all I have for you today.  I would like to take the time to say thank you for visiting my little corner of the cyber world.  With this sixth post of the 12 month of the year I can officially say I have been doing this whole blog thingy for 9 years straight!  Completely amazing, especially when you add up the total posts, total pictures and more staggering than anything, the total number of words that have been pressed out of my fingers.  I’ll probably make a few more bonus posts before the end of the year, but the self imposed quota is fulfilled.  Thanks again… now just need to figure out how to get the comments flowing again.

Stay warm everyone.. offer to take a coat off the hands of a globull alarmist hehehehe.

2 thoughts on “The Horn of Alton”