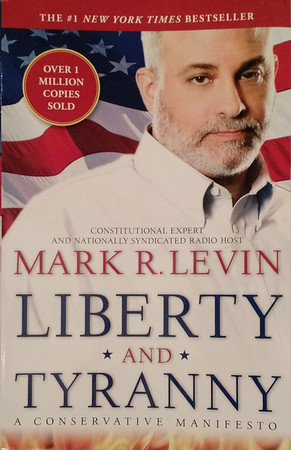 It was agility day in the household which means I had to pack my gear and head off to some small building somewhere in rural America to watch my dog navigate obstacles that rival any Spartan race .. well, a least for a dog that stands 9.5 inches tall and weighs a whopping 4.5 pounds. Linda was the official photographer for the event which is why I had to tag along even though there is a mountain of work to do at home (imagine Linda rolling her eyes about now). The good news is I get some time to work on the heavy lifting posts. Whenever it is time for a book recollection, a deep cleansing breath has to be made before diving into a pile of work. Of all the posts, the book reviews are probably the hardest in that they require documenting, verifying and reflecting on all the takeaways from the read. This was especially daunting with today’s featured read, Liberty and Tyranny: A Conservative Manifesto by Mark Levin. Just to put it into perspective, this was only a 245 page paperback but had over 38 pages of cited reference. If you do not now Mark, he is a true Constitutional Conservative and knows his stuff. I would love to see him live debate someone of a differing political leaning. That would be a mauling like you have never seen one. Mark has been a constant staple on my radio for a number of years now and has had a priority slot during the whole election cycle. We differ on a few things but for the most part we are aligned on our political positions. Depending on where you are at on the spectrum, this is a highly recommended read. It will give good arguments for the conservative left, sway fodder for the independents and well, just might make a liberal’s world explode into tiny pieces. This book was written back in 2009 and has some eerie projects for the future under Obama. Whenever someone is standing in bewilderment on what just happened with the Trump election facts from this book come rolling up. It is pretty clear what the left agenda is and how it is permeating everywhere in our lives. The best way to comprehend it is to arm yourself with knowledge. Knowledge you will not get in the bias and deceitful mainstream media of today or from the established talking heads in our government.
As far as the book goes, it is not a light read. It took me a long time to get through this because every page caused me to spend extra time rereading for validation, bumping up against my own beliefs and then pondering the implications. Being that it is a product of 2009, there are a few areas that did not come to fruition, but 95% of it is dead on and still burning issues to this day. I am not sure what the future holds with Trump as of yet (will at least let him get in office before making any conclusions), but it sounds like draining the Washington Swamp is going to be more like a damn opening. Give it a read – if nothing else when we meet in the future we can pass over all these fact/areas and focus on new areas should we end up debating whether we’ve come to the end of the US yet. Meanwhile think I’ll go corner the market on safety pins and pacifiers – think there’s money to be made there with the potential number of people that are going to need them as of late (ha).

Hit the jump to see all the takeaways (and these were only the items I bothered to note).