Welcome back everyone! Hope everyone had a good holiday and didn’t go too far overboard on eating.  Always a tough holiday for me since I have a bad habit of doing the math on what it will take to work off every dessert that I opt to enjoy.  You gotta splurge every once in a while otherwise all those workout sessions start being …well w o r k rather than an opportunity to enjoy some sweetness.  Been a busy holiday for me so decided to take a quick break and rest the legs – fingers were itching to do something, so brought up the WordPress dashboard and away we go.

Today’s post doesn’t feature one bird… not even two birds, rather THREE birds.  A true birding trifecta.  Let’s start with this pretty Heron.

That my friends is a Tricolored Heron.  It was shot while on our Texas birding trip back in November 2013.  In fact, all three birds in this post were taken on that particular trip.  My apologies, but I cannot remember the exact location this one was taken at.  Maybe Linda can remember and let us know in the comments.  I do recall that there were a number of small channels that were being used by kayaks – possibly a state park.  Likely somewhere near Galveston.

Hit the jump to read more about this bird as well as two other large waders.

We were driving past a dirt/gravel road when this Heron was spotted hanging out with a Snowy Egret.  They did not seem to be getting along too well and mostly kept to opposite sides of the road.  Every once in a while the Egret would get a little close resulting in the Tricolor getting a little testy towards it.  Typically these waders tend to get along fairly decent – at least in the many encounters I’ve had the privilege to witness.  I didn’t realize until researching this bird how limited of a range they have.  Basically the southern coastline and then down into Central America.  Lucked out both times on my southern coast visits in getting this bird in the tin – once in Ft Myers and now again in Texas.  Not a +1 for me, but still a cool sighting.  Very little in terms of facts on the Cornell site beyond that it used to be called the Louisiana Heron.

I did take a broader shot of the two inhabitants on the road.  You can tell that Tricolor was weighing the pros and cons of launching a full out medieval attack on that Egret

Next up is the Reddish Egret.  This is probably one of my favorites of the large waders.  They tend to display a lot of character whenever I encounter them and their color palette is stunning.  Something about that grey, burnt red and the pink hues on the bill that really set this bird apart from the rest.

Again, the exact location where this particular one was spotted alludes me at the moment, but again, likely in the Galveston area.  Pretty sure this was in the same location as the Tricolor above. This one could care less that I was there and more importantly, wasn’t the least bit concerned about having The Beast pointed at it.  The big glass has a tendency to scare some birds.

Not this one.  It was totally focused on filling up its belly with whatever creatures were inhabiting that particular body of water.   I would be more specific on the victims, but it didn’t manage to actually catch anything the entire time we were there.  Think it was getting a little annoyed at being owned by whatever was swimming just below the surface – you can almost see that frustration building up in the shot below.  “I’m gonna get that bastard if it takes me all day and night!” 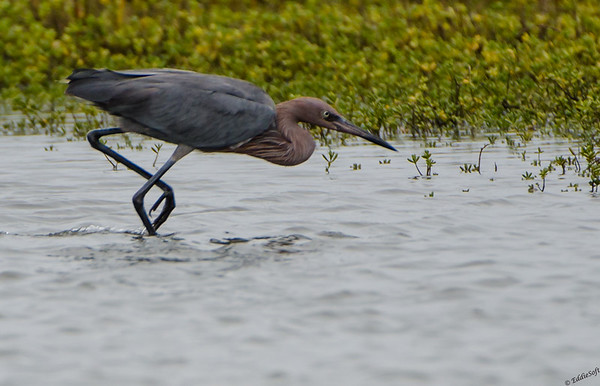 At the rate it was going it was going to take a while for sure.  This, of course, worked out great for me allowing me to capture some nice shots in the process.  Something tells me that its prey was busy sticking its tongue out and farting in its general direction. 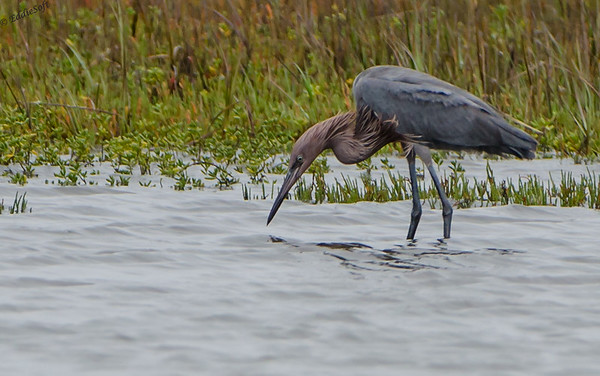 This has to be a new low for Cornell.  They do not have a single interesting fact about this Reddish Egret.  Nada, zippo, thanks for playing, I’m taking my bird facts and going home when it comes to anything I can relay onto my loyal readers.  They did include a description that indicated the Reddish is a very “active forager, often seen running, jumping, and spinning in its pursuit of fish!”  So, that small thing they do have about this bird happened to be personally verified out in the field. 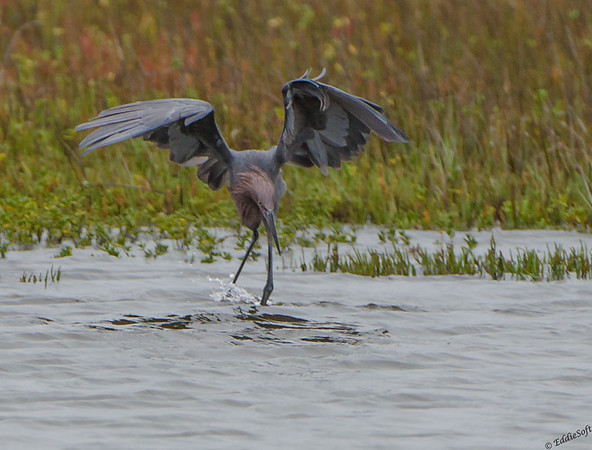 This specimen was tearing up the dance floor in its pursuit of a sarcastic French fishy.  “Damn fish, respect these mighty wings!”

These demands didn’t seem to be productive at all for the Reddish and only emboldened the prey to continue taunting it a second time.. and a third time… and a fourth time.. and a fifth time… 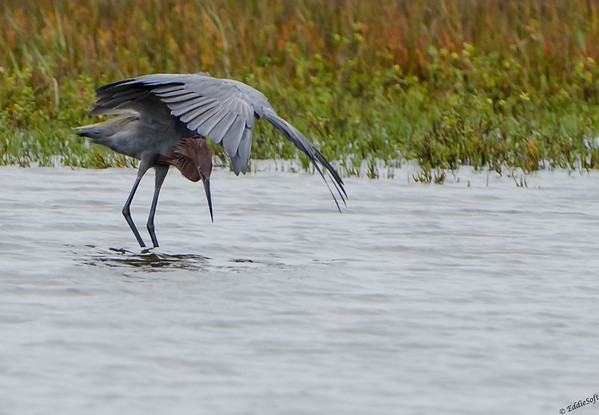 With the tin full of great behavior shots, I folded up the tripod and went in search of more specimens.  From my perspective, the fish won that battle, but waging a life and death battle with that dagger of a bill is likely only prolonging the inevitable.  By the looks of it, this Reddish isn’t used to losing the food chain game.  Like the Tricolor, the Reddish was not a +1 for me (link here). Still a good catch for the trip.

Lastly, I bring you this Heron. 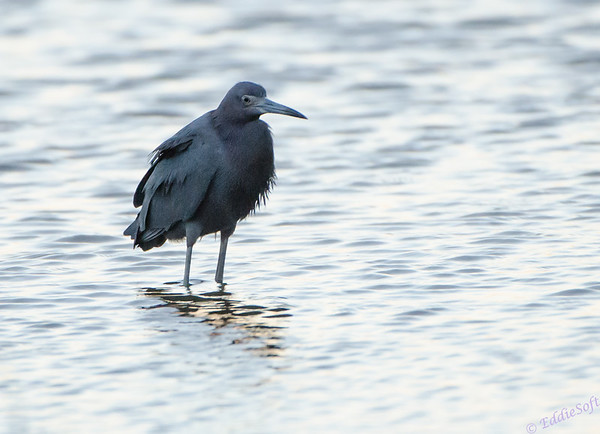 Sorry for the less than stellar pictures of this bird, but this specimen was shot in tough conditions.  The shots are lightened up significantly so you can make out the bird.  However, these were taken at dusk with very little light to work with .  We did not have Linda’s 810 back then, so I didn’t have the luxury of low grain high ISO.  I do know that this Heron was taken in Galveston and is one of the first birds that made it into the tin once we got to Texas.  There was a small pond area we passed on our way to the Galveston beaches.  This area was LOADED with birds in both different species and overall numbers.  You will see more shots from this pond in future posts that will depict the abundance of targets.  It was also a very well-known spot based on the number of other photographers taking advantage of the location.  We ended up parking alongside the road after a long debate on whether a “do not park on the side of the road” sign actually applied to out-of-state visitor bird enthusiasts.  Based on the number of other cars that were parked along the “do not park on the side of the road” area, we decided to take the chance.  It was a grey area anyway just how far down the road that sign really referred to.  It put me at ease knowing that it was the UB’s responsible to deal with the cops should they bother to show. 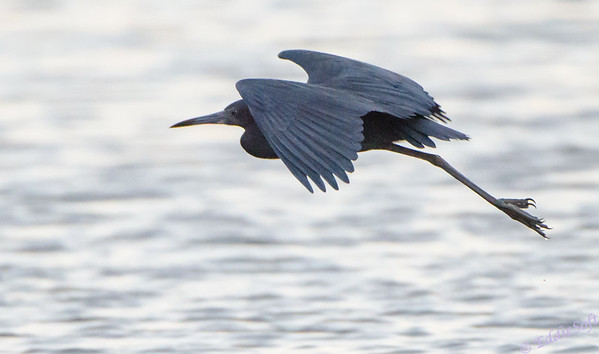 Besides, that risk of a ticket was a small price to pay for a shot of a Little Blue Heron.  Unlike the other two in this post, this bird was an official +1 for the check list.  Note, Ron was tasked with confirming this for me, but based on all the reference books I’ve opened, pretty sure this is a solid identification.  I will update the post should he come back with a different opinion. Until then, I’ll just make the mark in pencil.  These Herons also prefer the southern coastlines, but tend to move up into the heartland and down further into South America than the Tricolor.  In fact, they even indicated they can migrate through the Illinois region but safe to say I have never seen one up this far.

Here it is hanging out with other friends at the pond. 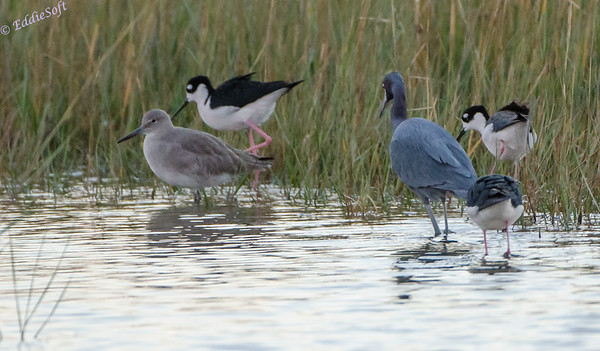 Cornell did have some more information about the Blue that I can relay.  Thanks to their rather drab coloring, they were spared the slaughter during the early twentieth century by the fashion industry – I think about this every time I have to listen to some fashion industry representative try and belittle me for eating meat – that kettle is black.  The other interesting tidbit was that the immature white coloring gives them a survival advantage since they are more tolerated by the Egrets and tend to mingle in their hunting parties.  I should probably go back and see if I have any Blues in their white plumage – I may have mistakenly assumed they were just Egrets.  Apparently you can tell by their slow and methodical hunting techniques compared to the hyper Egret approach.

Wow, this post got a little long, but I wanted to give you a good look at three different waders.  Hope you enjoyed the pictures from our Texas trip.  Take care and see you again real soon now.

2 thoughts on “Trifecta Scores One”