Welcome to December everyone!  I honestly cannot believe we are this deep in the year already.  Seems like a week ago we were prepping for the Halloween Trail and god knows where our warm temperatures went.  I had to bring out the running tights, stocking hat and mittens to make it through my recent runs without turning into an ice cube.  As depressing as the close of the year seems, the bright side of it all is we are under 50 days from a change in guard in our elected officials.  Trump isn’t even in office yet and already saved 1,000 jobs yet the socialist is already shouting to the press how disgusting that is – and they wonder why their asses hurt from the election.  I’m holding off on saying too much to give Trump at least a chance so let’s pivot back to a place that can at least give us memories of warmer times. 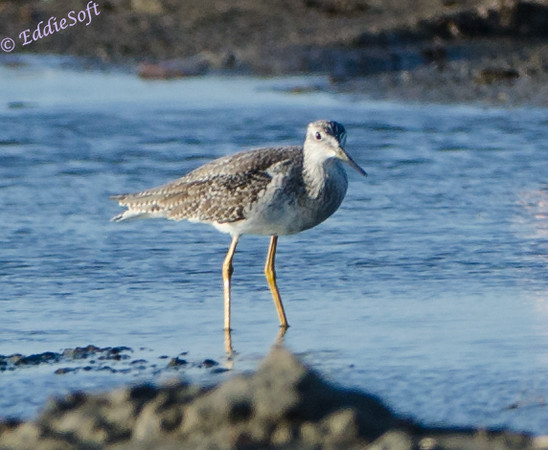 That pile of feathers on stilts is a bit of an accidental find.  As with most of the birds as of late, this fine specimen was shot on our birding trip to Galveston, Texas.  I can’t express just how productive that trip has turned out to be.  It is hard to grasp just how many new birds were scored on that travel when in the heat of the hunt.  You are so focused on shooting anything that moves that you tend to lose track of what bird you were shooting the hour before.  Especially if there happens to be a secondary bird roaming in the same vicinity as a bird that immediately grabs your attention.  That is the exact case with this Greater Yellowlegs.  That prize bird has already made the blog spotlight (link here). 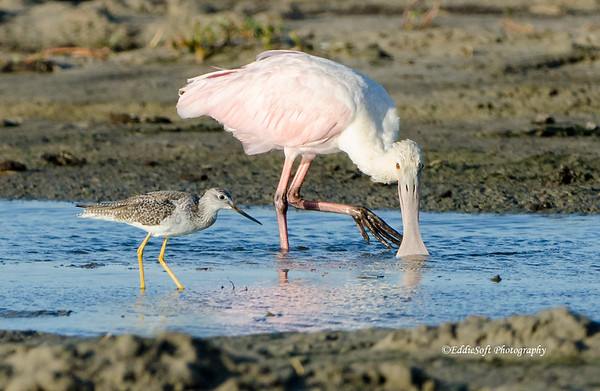 Hit the jump to read a bit more about that Yellow find.

While processing the set of Spoonbills, it became apparent I was being photobombed by Mr. Yellow here.  To my credit, I must have seen it in the frame because I did follow my golden rule to take a few shots of anything that moves in the area.  Likely at the time I passed it off as the Lesser variety that I already had (link here).  Very crappy shots of course, but still already a check in the book – unlike the main focus at the time Mr. Spoon. 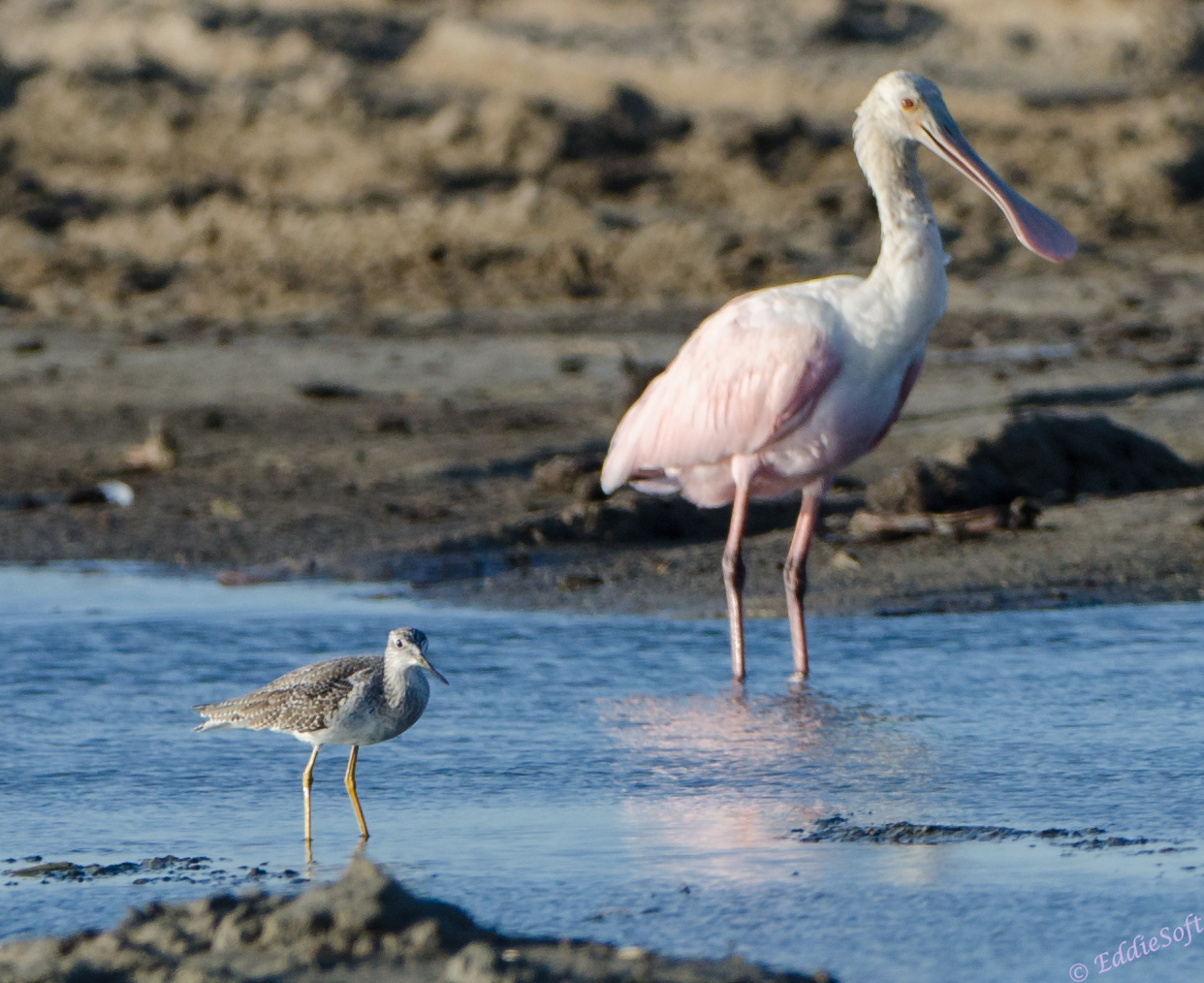 However, after closer inspection I noticed that this Yellowlegs had some distinguishing features.  Primarily, the slight upturn in the bill (check out the shot two above for a better view of that feature).   Just to be sure I also checked with my brother Ron to see if he had any reservations with the ID.  After some discussion we came to the agreement that was indeed the Greater variety and … represents a new +1 for the record books. 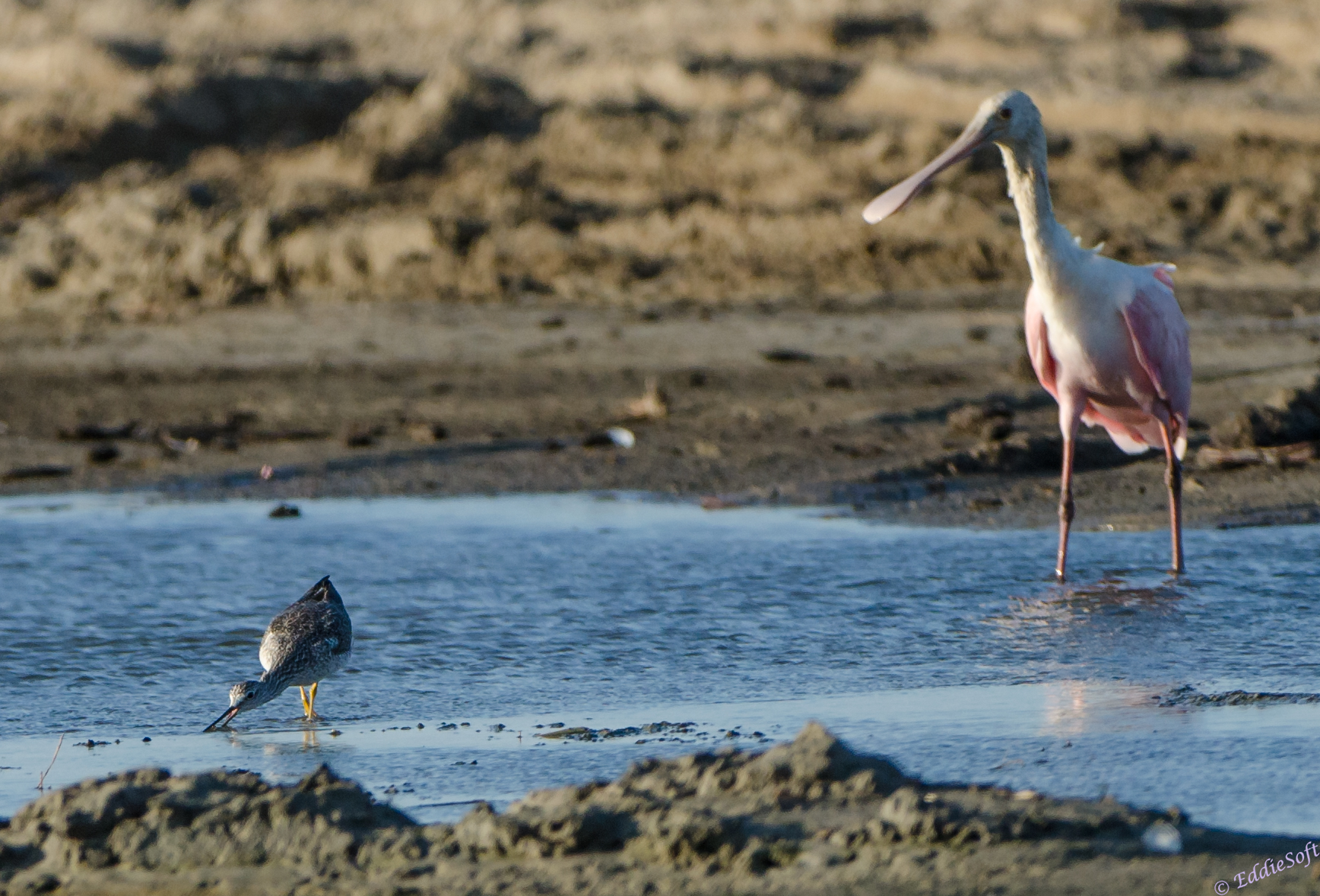 I should point out that the previous post on the Spoonbill was difficult to prep because I didn’t want to reveal this other bird’s presence until I was ready to post on it .. well, at least until I had verification from Ron and that had not come yet at the time of the Spoon post.  As a result, I was filtering out some of these Roseate pictures which I really like.  Nothing better than getting nice behavior interaction shots especially with different species.  These two seemed to be tolerating each other fairly well but that Spoonbill always seemed to be keeping at least one eye on his food competition. 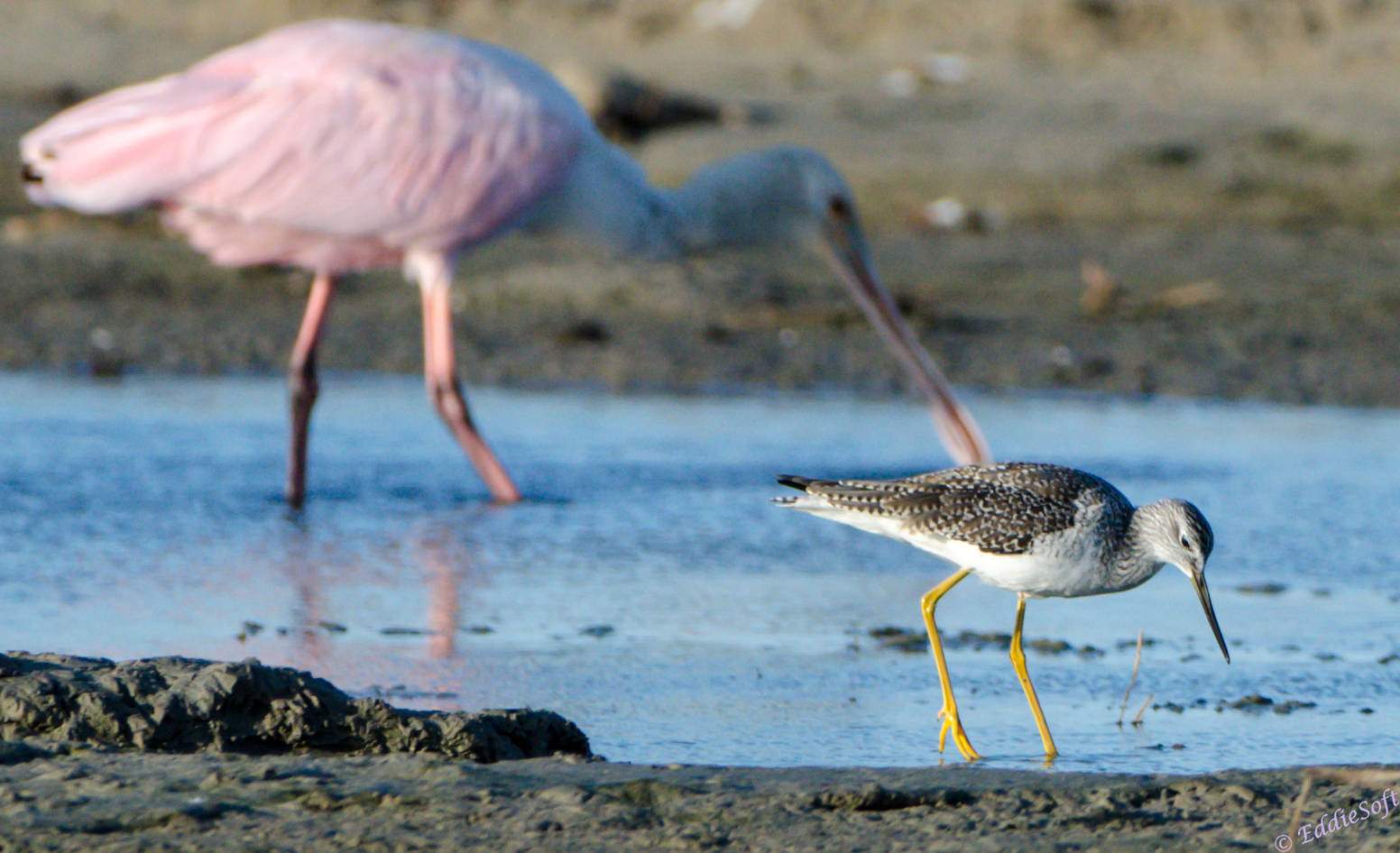 Guessing the larger Roseate was waiting for the little guy to find something and then muscle it away.  This is speculation of course since this was never witnessed.  Instead, the Spoon would simply nonchalantly ease over and start hunting the same area – now I did witness and capture that behavior. 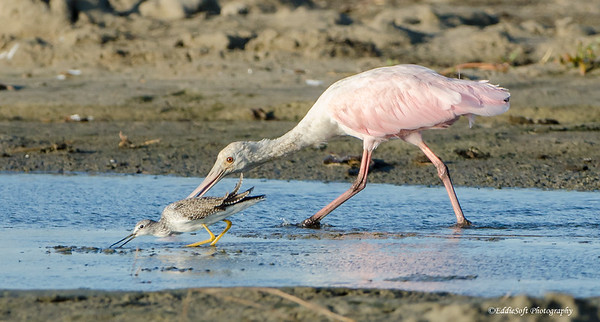 I really like the symmetry of that shot.  I wish I had the FStop open a bit wider to get the Yellow just a bit sharper but I can live with it.  Wow, just like the year, this post went fast.  Only one picture left and I haven’t really given you any facts to bury in your gray matter.  Let me go check and see what Cornell has to offer.  Well, not a lot there folks beyond the fact the Greater Yellowlegs hasn’t really been studied much due to their preferred habitat being –  inhospitable mosquito-ridden locations.  Apparently today’s bird researcher is getting soft (a growing problem across many disciplines).  Granted, I did donate a hefty amount of blood to the local spears with wings – they grow ’em big in Texas! 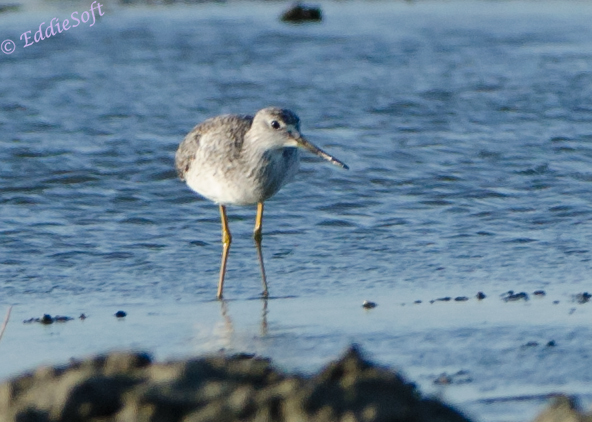 Well, that is all I have for you in this first post of the month.  Hope you enjoyed seeing the latest check in my list.  If nothing else, the shots of the Gulf shoreline hopefully warmed you up a bit.  Stay warm everyone, winter is upon us.

2 thoughts on “My What Great Big Yellow Legs You Have”