If I counted correctly, this just might be the 6th post for November, yeah!  Life is a bit easier when there is a large queue of already processed pictures just begging to be published.  Pretty sure there’s fodder now to take me well into January if I just stay with the quota minimum.  Truthfully, I’ll probably go a little heavy on the next couple of months to push through the rest of the 2013 images and I still have a few Halloween posts to get through.  The good news is I have officially completed processing all of the 2013 images and now started to work on the 2014 collection.  Being two years behind sure sounds a lot better than being 3 years behind ha.

The good news is I have a few days off to celebrate the annual Turkey slaughter day which will give me some time to get a few more posts out this month.  How about we start with this pleasant looking dude. 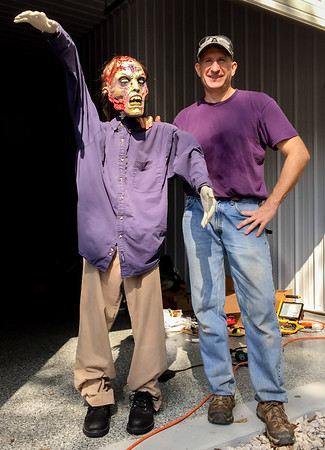 Of course, I’m talking about the one on the left.  If you have been following the Haunted Trail posts (link here) you have probably already seen this new decoration for 2016.  If I remember correctly, I didn’t give a lot of detail on it knowing that a post was forthcoming dedicated to it.  Well, we are finally here.  This is another version of my Posey line and marks the next evolution of the frame.  I already talked about the frame upgrades for this year (link here), but this is the first model in the new Posey Westworld line.  This marks the first step in a big journey to up my game in the decoration arena.  Due to uncharted territory, I started with a small prototype. 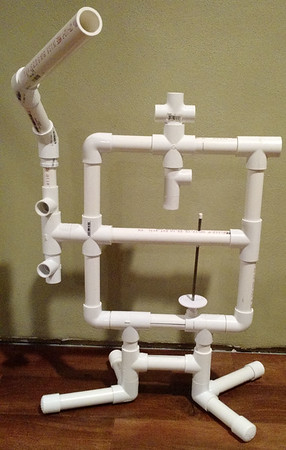 Hit the jump read more about the new model!

The goal was to add animation to the Posey line – to be specific, I wanted to add three different animations to the same Posey – a side to side motion for the right arm, a rotating head and a chopping motion for the left arm.  This frame allowed me to experiment on different options with relative ease.  Two of the motions were in the same plane – the right arm and the head.  Both turn horizontally on the frame.  The difficult one was the chopping arm since that required me to change the motion plane 90 degrees.  It should be noted this project was started somewhere around March of last year and basically took control of a large portion of my basement – trust me, Linda wasn’t exactly please about that but to her credit she mostly understood and let me tinker without too much issue (as long as progress was continuing on the basement remodeling that is)

This is where my new 3D printer came into play.  I’ve machined grey iron planetary carriers and bevel gears in my career so pretty familiar with the mechanics of those gears.  Need to turn a gear rotation 90 degrees – the bevel gear is just the thing.  After finding a few bevel models on the web, the printer was fired up and we laid down some plastic. 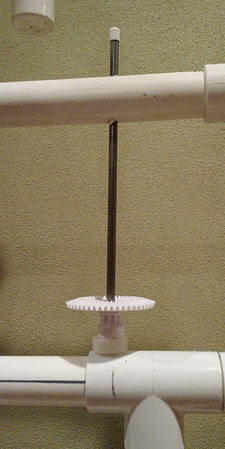 The design was to put a belt on the bottom gear (under the bevel plate which could be used to turn the rod.  That rod was fixed at both ends into the PVC to keep it in position with the horizontal pull of the belt.  Now to get the corresponding bevel gear to ride on the plate.  First thing was to make a cap for the other rod. Once again, drawing from my many years developing solid modeling solutions, I whipped up some new models in Autocad’s Fusion 360 software (note, that software is awesome, especially being that it is free).

I didn’t want the cap to slip on the rod, so simply embedded a key in the model.  That key was cut into the rod end giving a non-slip cap.

The other end of the cap was another key rod that was inserted into a the bevel gear companion.  Now we had the rod that would generated the required rotation in the other plane.

That new bevel needs to ride on the gear plate.  To help keep it in place, it was put through the support pipe in hopes it would keep it from slipping.  To be honest, there was still some slippage but figured a small harness could be printed that would screw into the bottom PVC and hold the gear down.  Everything was looking really good up to this point with just one overriding concern – would the plastic teeth hold up to the torque from the motor.  The 3D models I found on the web had the right design, but the tolerances were a little loose allowing the teeth to move a little in the grooves – something we made certain didn’t happen in the real bevels we were making in the factory.  I know individuals that spent their entire career looking at the splines we cut into the metal trying to optimize the wear and surface contact – the difference between working with iron and laying down plastic. 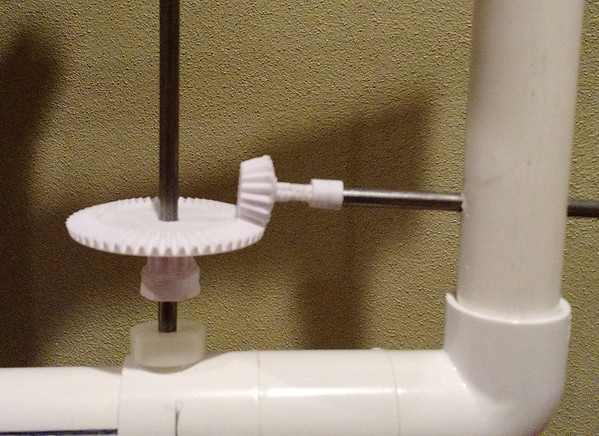 Okay, now the frame was built, time to work in the required linkages.  This area was new to me and required some education and testing to get a feel for what kinds of motion can be created and the impact of varying linkage sizes.  While Linda was running the dogs in the agility ring, I was out in the camper playing with bars trying to figure out the mechanics. 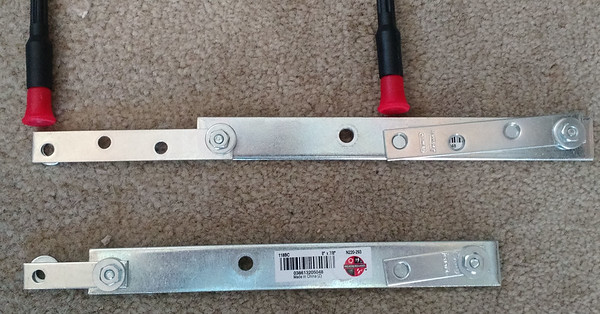 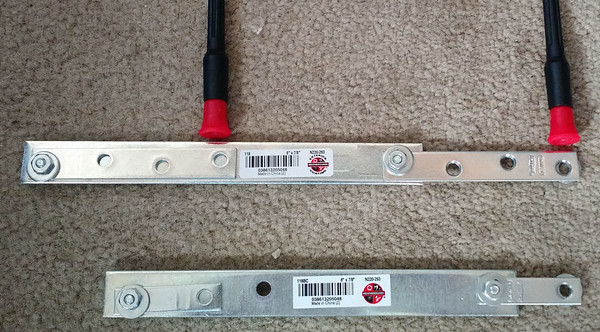 Now I had a basic understanding of the principles involved.  With the help of my brother Ron, we took it to the next level and modeled it on computer.  There is actually some pretty cool programs out there that allow you to mimic the linkages in a model and simulate the effects.  Ron figured out how one particular program worked and made some simulations that produced the exact motion needed for the right arm and head.  Big thanks for his help on that.  Now we had a linkage design that turned the 360 degree motion of a wiper motor into a nearly 180 degree back and forth motion.  Turns out the closer the outer bars are to equal length, the closer you get to a 180 motion – don’t make the equal though… that causes a bad torque at the extents.

Okay, linkage was done so now onto the rotating mechanism.  After numerous design attempts, I decided on some bushings for a 1″ PVC connector.  This bushing would insert into the bottom of the connector (in this case the cross connector) and allow for a 3/4 PVC to slide up the middle of it – this bushing was press fit onto the 3/4 pipe so it didn’t move.  The same bushing was put on in the same orientation on the top and would simply ride on top of the 1″ connector.  This allowed the connector to carry the weight of whatever was being turned and keep it off the linkages. Note, this design was later modified, turning the top bushing orientation so it inserted into the PVC as well  – this kept the 3/4 PVC centered in the 1″ connector and still kept the weight off the linkage. 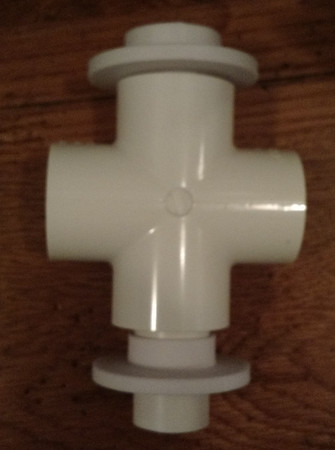 Since the printer was still warmed up from the bushing print, decided to go ahead and whip out some wiper motor holders.  Some quick subtraction of a cylinder through a rectangle in Fusion 360 and presto – a nice way to hold the motor to the frame. 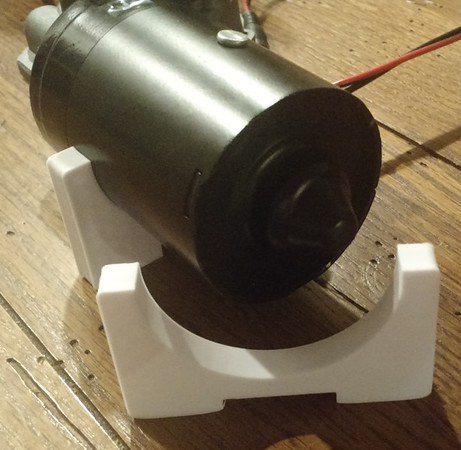 The middle groove was added to the bottom to allow me to fix it to the hip base.  Turns out I just used zip ties through holes in the plexiglass plate which worked sufficiently for my needs. Will probably go ahead and print out a mounting plate the bridges can slide into for future versions. 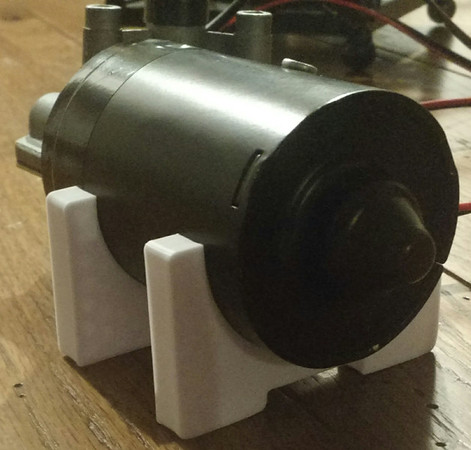 Now to put it all together – for ease, went ahead and made a smaller frame to test out the motion.Oh, should probably mention, this motor was picked up from Monster Guts along with the quick AC adapter and the all important speed regulator – pretty pricey, think it was in the $70 range (ouch –  a lot of the cost is in that speed regulator board)

Now that I can embed video, here is a quick look at the mechanism at work.

Yes, I made another model.  This time with the official hip plate made out of plexiglass.  You can see the tie wraps holding the motor to the plate if the next video which shows the motion from the backside.  Again, these motors turn in a 360 degree motion – the three bar linkage converts it to less than a 180 motion.

Okay, now the right arm is moving left to right – next up was the head.  Since the motion was in the same plane, the linkage could be tied to the existing arm linkage coming off the motor. 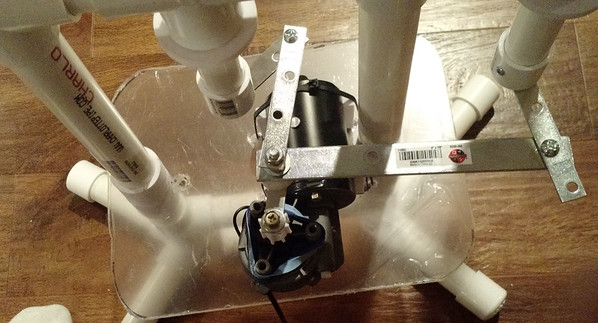 How about we put that in motion so you can see how the arm and head now move back and forth – thanks to the linkage characteristics and orientation of the bars to the moving 3/4 PVC, the arm and head can move at different rates/angles. 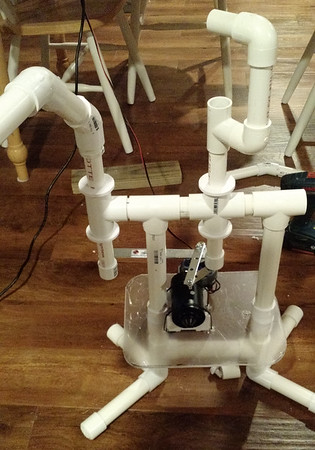 Now it gets a little tricky. Turns out after all that work on the bevel gear, I went with a much more simplistic model.  Ron actually gave me the idea that the motion of the arm/head linkage could be used to drive the arm down.  It was getting close to our party time now and this looked like a quick way to address the third motion.  Got some nylon string and added an elbow connector to get the motion in the right plane to pull down on the arm.  To take the stress off of the string linkage, some counter weights were added to the back of the arm.

All was looking really good now.  Time to build the full Posey frame using the standard Posey twist couplers.  Sorry for the cluttered picture, but you should be able to make out the details of the full frame. 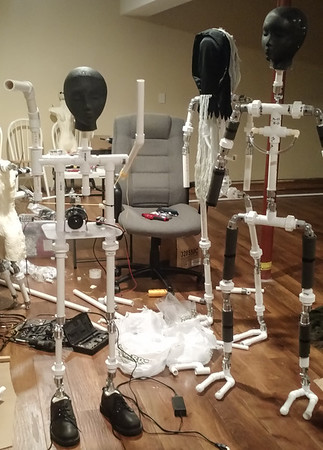 Now all that was left was to get the clothes on and add the props.  The original plan was to have a lantern in the right arm.  This would give the impression it was looking for something out in the dark.  The left arm would have a knife in it to enhance the chopping effect.  That was the plan… in the end time caught up to me to the point it almost didn’t make it out on the trail.  Thanks to some late night heroics around 2am the morning of the party, I was able to get it functioning – the chopping arm was causing some problems with the shirt so cut that out for this year and just put a fixed arm on it. 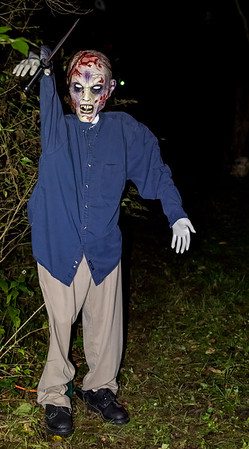 Topped it off with a creepy mask and some zombie hand yard stakes.  Ron was able to get the knife in the moving arm – turns out Linda confiscated my lantern because she thought it looked good in the basement – honestly, I was too tired to debate it

There you go, the new Westworld line makes its debut on the trail.  I am currently working on updating it (yes, Linda has already made her opinion known about the basement ALREADY being taken over for next year’s trail).  I’ll post the updates as I get them finished, but basically adding the foam chest to bulk it out there and need to work on making the arms and legs beefier.  I’ll also get the left arm working before I pack it away for the year ….. or not.

Hope you enjoyed the new Westworld Posey line.  There are big plans ahead for this model – can’t wait until next year!