It’s the middle of November and I’m finally getting back to the Halloween 2016 posts.  I’m not so much slow as I am currently overwhelmed with projects.  All those things I put off to focus on the Halloween Trail are coming back for revenge.  Most of my time has been spent on wiring up the new garage in preparation for the required inspection – at this point pretty sure I’ve donated about a pint of blood on that project but still better than being electrocuted so fingers staying crossed as I finish that effort.  Maybe I’ll give a quick post on that in the future, especially since this will be the new home for all my outdoor decorations.  Speaking of which …

If you already check out the Haunted Trail 2016 walk through (link here), you probably already noticed this decoration.  This was one of the new additions this year and happens to be one of the new animated decorations – that’s right, the ANIMATED DECORATIONS that made it out on the trail this year.  Most of this year was spent trying to learn and experiment on how to bring another level of scare to the trail.  This, of course, didn’t exactly win the heart of my wife who had to put up with the build phases strewn about her basement many many months before October.

Granted most of that time was spent on another decoration that will be making its way to the blog in the not too distant future.  This decoration .. well, the base of it was constructed a week or so before Halloween, but it wasn’t finished until the night before.  The fact it actually worked and looked halfway decent is a small miracle due to the fact it was completed on serious sleep deprivation.  Let’s take a look under the covers.

Hit the jump to learn how this animated prop was put together.

The heart of this prop is the wiper motor.  Thanks to a heavy dose of Pinterest and YouTube I’ve become pretty versed in the capabilities of a motor and a myriad of different linkages.  I am not going into deep detail on the technical mechanical details – well, in this post, maybe the next – but this one is fairly simple.  Basically, I just needed to pull a lever back and forth.  My brother Ron found some perfect wiper motors in the Chicago area (i.e. North of I80, East of I39).  He also found a power supply that would run it directly off of AC.  Just clip the power supply wires and solder them onto the leads of the wiper motor.  Granted you have to figure out which wire to solder onto, but some quick looks on the web and controlled tests figured that out fairly quick. The best part of these motor is it has a built in linkage mechanism that only allows it to rotate about 60 degrees (UPDATE: as Ron correctly pointed out, that should have stated 160 degrees) which is quite handy since the linkages will not have to pass over the center post (you might not realize that most wiper motors actually go around 360 degrees – two bar linkages can reduce the travel)

Once I got the base motion figured out (still using a two bar linkage) I only had to figure out how to build the rest of the structure for the crawler.  Referring back to the second picture, the key is to have two parallel cross bars that are fixed at their center points a few inches apart.  The ends are then connected by the rods which will become the crawler’s arms.  The wiper motor simply pulls on this pivot point bringing the two arms back and forward.  Due to the linkage formed by the two bars (a forming a rectangle) you get the effect of the arms alternating back and forth in a parallel plane.  I will admit, before I fixed the center points of the cross bars into the wood, I didn’t believe it would actually work since moving it by hand didn’t produce the same effect – mainly because I was letting one of the crossbars slip off the center point. 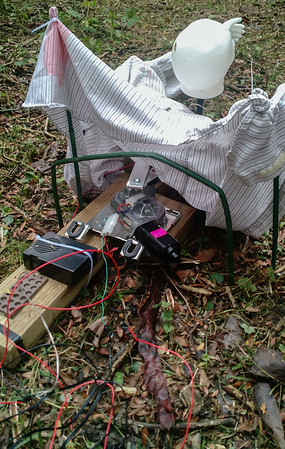 Since I had a lot of PVC pipe laying around, I just used that for the crawler structure.  It took a bit to figure out how to get straight holes in the round PVC, but that was resolved with a quick jig and a drill press.  I had some deck screws laying around, so used those to hold it onto the board – the next one I build will simply use a bolt and probably aluminum bars to give a more polished look.  Sorry for the crappy picture below, but Menards had this yard stake decoration this year.  At the time it was picked up, I hadn’t thought of the crawler yet – after the structure was built, I happened to look over and see the unopened box… p e r f e c t!

For some stupid reason, the wiring on this thing wasn’t in a continuous line. If I remember correctly, one wire went from a hand to the head and then another from the same hand went to a voice box and then a wire from the head went to the other hand – something like that, but definitely a pain in the ass.  All the wires had to be cut, lengthened to put on the structure and then hooked up to some sensors (yes, those will be covered in a post as soon as Ron gets me some diagrams .. nudge nudge).

Here’s my first video ever on LifeIntrigued which hopefully shows you how this dude moves.

Add an old shirt, some red dye and a little duct tape – presto – super scary ground crawler.  Unfortunately, we found a small flaw in the design when we put it out in the graveyard.  The back of the shirt kept getting caught in the linkage.  That is why we had to add the small sticks to keep it away from the motor.  This will be addressed for next year.  Other change I had to make was using a lock nut to put the linkages together – it fell out during the test runs – again, an easy fix.

I must say, for putting it together rather quickly, it worked out quite nicely and was a good addition to the graveyard.  There is room for improvement, but pretty pleased with version 1.  While packing up all the decorations it occurred to me there was one needed change that could be done rather quickly. I had broken my golden rule about incorporating storage characteristics into the design – time to fix that.

All the wires were clipped and connectors added at strategic places.  Ended up cutting off the arms at the base to add a connector.  Looks the same as before when put together (note, I realized the hands were oriented the wrong way so fixed that as well)

…. but now it disassembles very nicely!  It now fits into a standard storage tub – yeah.

By the way, this image gives a good view of the linkage used on the motor to get the desired back and forth motion.  As mentioned previously, this motor is unique in that it doesn’t go all the way around – this allowed me to put the outer linkage bar underneath the bar on the motor rod.  Hard to explain in text, but if you mentally think about it, if the motor went all the way around, the lower linkage would bang into the motor rod… very bad.  Since it doesn’t I could keep it more compact which still wasn’t enough to keep the fabric out of the way, but now it is an easy fix – just put a cover over the linkage and it should be good to go.  Probably should point out a key design element for the kiddies.  If you are making this yourself, be sure and NOT overlap the two linkages by very much.  If you do, you will create a dangerous pair of scissors that just might snip off your fingers depending on how much torque your motor has – you’ve been warned.

3 thoughts on “I Needz Yur Ankles”