Greetings everyone!  I am finally back from a quick trip out to North Carolina.  Linda wanted to fill up on new waterfall pictures and I was hoping to get some new bird pictures.  That, and to support a state that understands the stick figure with a skirt is the girls bathroom and the skinny stick figure, well that is for the boys.  It was touch and go there for a bit since the news outlets were hyping up the hurricane potential to get everyone worked up.  This gave them the excuse to pull all their pretty hurricane rotation maps out of the mothballs they’ve been stored in for the past 10 years.  Storm passed, it drop some rain and toppled some picnic tables, but the Smokies looked untouched.  I was able to get a few posts out on the road, but most of the time was spent prepping a bunch of future posts. As of now, I have close to 4 months of blog fodder patiently waiting to be dumped like another batch of crooked Hillary emails.  I was able to get a good run in today, so figured it was a good time take a break and get a short post out of the way… and by short I mean 20 feet.

That happens to be the distance of the latest bridge building effort on the lot.  It seems like every year around October I am busting out the hammers and drills in order to fix an existing bridge or make a brand new one.  This year it was a replacement bridge thanks to the destructive tendencies of my run-off stream.  When I bought the property over 10 years ago, we had a one foot trench that water coming off our hills would collect in and slowly make their way to the larger stream on the property that Serenity crosses (link here),  By last year, that little trench had widened to about 6 feet.  That prompted an 8 foot bridge project last year at this time – note, this usually becomes a problem around Haunted Trail time since I need to get the ATV down there with the decorations.  I remember putting that thing together in the dead of night by the car lights.  With the stream now at 8 feet, last year’s bridge was unsafe to cross. Crap, another bridge build and I already had enough to do to get ready for the party.  Luckily, I already had the 6x6x10’s above so that saved me some time.  As you can see, I had to put those end to end.  I used a post coupler to join them and then put planks across the joint to stiffen it up.  Those planks were shot with 16 penny nails – going nowhere!

Hit the jump to read more about the build

To help with the build, I just build it on top of the first bridge I had built many years ago – I removed last year’s bridge in order to reuse the 3/4″ treated plywood flooring – beyond the posts, those are the most costly element of the build so wanted to reuse those for sure.  Note, you can see the previous bridge frame in the far part of the picture. Next up was putting the cross beams in – they were a mixture of 2×6’s and 2×4’s.  Just set those in with hangers and put 2×6 cross braces on the bridge ends. 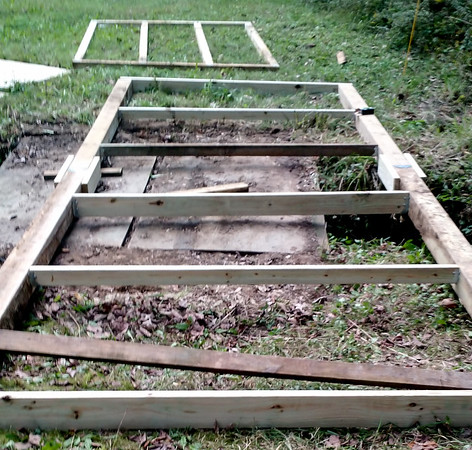 After laying out the plywood, decided it wasn’t as rigid as I wanted, so went ahead and put additional cross braces in along with some screw supports for the flooring.  The cross braces were originally put at the 4 foot marks which didn’t give a whole lot of room for attaching the butting ends of the plywood sheets. No worries, just put a few more braces across and doubled up the connector points to give more surface for the screws.

Still a little concerned about center point of the bridge and the stress on the post joints I even added some parallel beams to take some of the stress.  Now that the frame was where I wanted it to be, all that was left was to screw down all the plywood.  This has the added benefit of tightening it up nicely.  Last part was to build the end ramps (flooring was now 6 3/4″ high now) – ripped some triangles and attached them with variable angle hangers (although I only needed 90’s this allowed me to attach them easier since I could let them freely hang while attaching the plates to the front cross beam).  Note, once again, the main part was built at night by the car lights – the finishing part was done in a complete downfall so the water gods were not happy about me trumping their hard work.

Again, just used the ramp plywood from the previous bridge – a little short, but it would function and I didn’t want haul the plywood back to the garage to rip more – no power where this construction was taking place – thank god I bought a gas canister Pasload frame nailer when I was building my house.

All that was left was the final strength test – This did not have all the structural integrity of Serenity but it was less than half the distance and I’ve used this design a number of times now. Still always end up holding my breath driving over it for the first time. 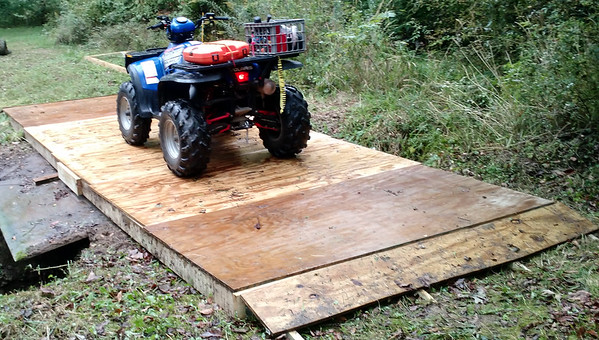 Success!  There was very little give and more than strong enough to hold the heaviest item that will be going over it. With that out of the way, I could get back to planning and building the Haunted Trail.  Needless to say, I could have used the 4 nights it took to  build this on other party related activities.  Hopefully this will last a couple of years,  but one never knows when it comes to free flowing water.  If you are wondering, I fully expect to have to fish that bottom bridge out of the ditch before too long.

2 thoughts on “A Bridge Not Far Enough”