Today we are back with the second part of the 2016 Posey upgrade project.  If you will recall, in the last post we went over the major upgrades to the appearance of the body and the new classy shoes.  There were a few more enhancements that I wanted to highlight and thus part two.  These additional enhancements were primarily a result of trying to put everything together.  Due to the early timing of the Halloween party this year, I wasn’t able to put the full product out although the second mold (the one that didn’t cure right) ended up being used for a great prop.  After the party, I was able to spend some more time and try to put the finishing touches on this year’s model. 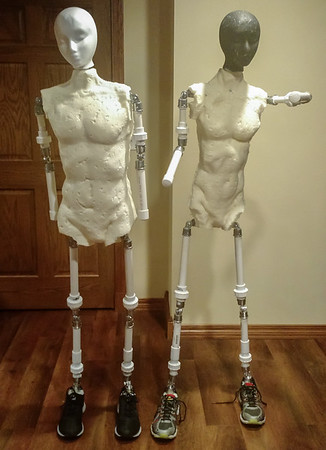 It didn’t take long for the first problem to come to light.  When I went to attach the appendages it turned out that my initial idea to put the couplers at the ends of the molds .. well, let’s just say I didn’t think that one through enough.  I had planned to use the same coupler structure from my previous Poser version – to do that with the arms meant it would either stick out another 4+ inches or cause me to cut all the way back to the center post and then dig into the foam chest to give room to turn the couplers. This had to be fixed.

Since I had purchased other molds, I decided to work with the male adult mold this time.   Like last time, I still wanted a 1″ PVC frame (that size works best with the fence post ends).  In an effort to address the appendage problem, I went with an idea that I tried on a previous Posey version – basically took a coupler and chop sawed a kerf cut half way through the end.  Those cut couplers were put on the spine couplers for both the arms and the legs – since the neck can spin in the coupler on its own, I didn’t cut the neck coupler.  Note, in the first attempt, these couplers were attached end to end to the spine couplers and then the PVC pipes were extend out through the mold to keep it in place.  The other change was putting the leg posts horizontal rather than vertical.  I do not have close ups of that version, however, I do have ones from the next iteration.  Rather than take the extra space for the couplers, I decided to put the cuts in the actual spine couplers instead.  You can see that in the shot below.

Hit the jump to see the new features in detail

Same process as before with regards to the foam steps so I’ll skip that detail.  The only small difference is I greased up (Vasoline) the PVC pipes that extend through the mold because I wanted to be able to pull those out easily from the foam.  So now I have the foam structure for the arms and thighs, but not the fixed posts.

Now I could simply put fence posts ends on pipe and insert them directly into the couplers (that now have the additional half cuts in them).  I made those pipe lengths such that once inserted into the spine coupler the metal joint holes ended at the natural joint points in the shoulders and the middle of the thighs.

Now to simply grab the foam sculptor and make a few adjustments to the body.  On the shoulders I needed to cut them flush to the metal joints.  The legs were a bit more difficult.  After some false starts the plan changed to simply cut the thighs flush with the bottom of the PVC frame and then trim back on a diagonal line across the fence posts.  This deeper cut allowed for better leg movement/positions.  Wasting that much cured foam was a bummer – probably in the future I’ll just limit the fill in that area.  Oh, forgot to mention – with the adult male, I had to use two complete extra large Great Stuff cans.  That upped my cost a bit, but the reduction in the number of couplers helped counter that. 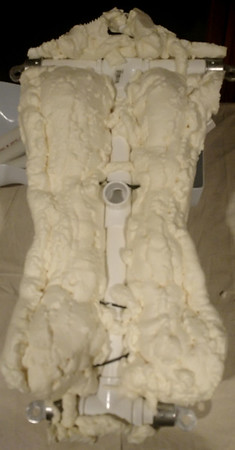 Might as well show the front side of the male, He really came out nice and full and thanks to finally getting the process refined – zero problems with the curing.   You can also see I gave the neck a foam shave to give that a more realistic look – the extra thickness on the back of the neck definitely needed to be removed as well since the mold basically included a complete neck in it unlike the rest of the body which only had a half mold.

Here is the first iteration put together.  I only used one large can of foam on this one and that made it a lot thinner once it cured in the mold.  From this side you cannot see the difference in the coupling mechanism.

On the back side, you can see that extra coupler attached to the spine couplers … and you can tell that less foam was used in this version which exposed more of the frame.  Now for the key design element.  If you recall, the previous Posies used large PVC twist couplers in the shoulders and the thighs to give freedom of movement and allow for it to be broken down nicely for storage.  Those are no longer needed in the new design.  Remember those half cuts that were made in the PVC couplers? Well, those allow me to put a screw through the slot and into the PVC pipe.  Now I can simply turn the fence post end anywhere in the 180 degree range and then lock it down to the coupler with the screw.  It took me a bit to figure out the right positioning of the fence end to the screw hole – just put the fence at the two extents you want and mark it.  This was actually the interesting part of the project – trying to get all the positions I wanted with the basic kerf cut – if you are building this for yourself, go ahead and try out the various positions – it can handle all the natural positions without issue – just remember you can go in two directions with the fence post joint so when you think you hit the max of your movement – move it the other direction and flip the joint direction.

Now for the side by side comparison – duplicating the first image now that you know more of the details.  You can definitely see the benefits of the extra can of foam – just make sure you spray it with hot water as outlined in the previous post.

Now the back side.  Notice the one on the left no longer needs the extra straight through couplers since the cuts were put directly in the spine couplers.  The heads were simply put on with a 1″ to 3/4″ reducer that spins nicely in the straight coupler that was kept in the neck. 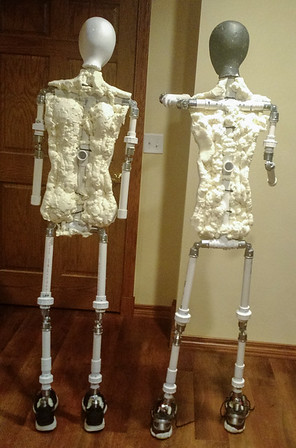 There you go boys and girls – the 2016 Posey model.  Next year I will likely add some pool noodles are perhaps some more spray foam to thicken up the appendages, but for now – I’m declaring this a complete success.  My friend Brad has already used them in his Halloween display and they looked great!