Welcome back everyone!  Due to the busy schedule last month, I didn’t get around to posting my annual run in the Summer heat!  June means the mercury is rising here in the Midwest.  That is exactly when the masochists that put on the Peoria Steamboat Classic race get to test the mettle of the area runners.  Once again, I was signed up for the Toughest 15K in Illinois. 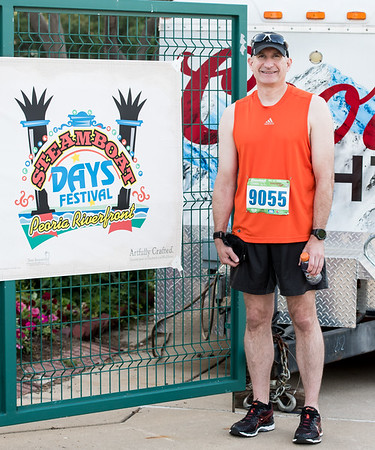 I was running it with Ryan and we had a secret advantage – this was our home course.  Remember all that training we did for the Marathon.. all those weekends  taking on the hills of Springdale and Glen Oak?  Well, the parts that gives this race the “Toughest” classification are those exact same hills.  This gave us a boost of confidence at the start of the race – well, as you know, I am pretty loose at the start of races – Hi Linda! (you can see Ryan just a bit behind me)

Note, the lady in front has the 15K bib on (there is a 4 mile race that starts with us) – and so does the lady behind but she already looks terrified (not good seeing as there was 9.29 miles to go).

Hit the jump to read more about how the race went!

When we left for the race in the morning it was unseasonably cool out to the point Linda was wearing a jacket.  This is a welcome condition for runners!  Ryan and I stayed together for the entire race – always more fun when you have someone to share your struggles with and keep each other focused (or more accurately distracted from the pain we are inflicting on ourselves).  The first loop was solid – we owned the mega-hill.  The weather was warmer, but still pretty cool for a Steamboat day.

The sun came out on the second loop, warming the pavement up fast.  We pushed up the hill for a second time – think we both went to the “dark side of the moon” towards the end but we made everyone very aware that we OWNED that hill.  With the heat up and the second hill conquered, all that was left was maintain momentum and make it through the flats until the final decent and run out to the finish line.  Ryan started fading a bit on the decent so gave him a bit of encouragement – he dug and closed the distance.  A bit before the final turn I asked Ryan if he had anything left – he confirmed and we turned on the jets.

That guy ahead of me was in my sights!  He had passed us on the downhill and I couldn’t let that go without a fight.

Notice the distance in the shot above between the guy and the far fence.  Plenty of space to make my planned pass.  As soon as I get ready to pass Mr. Baldy CUTS MY ASS OFF!!!!  I had to pull up and actually tripped over my feet nearly going down.  I managed to jump up and untangle my feet while shifting to the outside of the two runners.

That pissed me off and I made sure he knew he was out-manned.  Once that goal was attained I picked up a new goal (I’ve had this discussion with my brother Ron a couple of times now – there are certain motivations at the end of the race….well, let’s just say time to go to fourth gear). 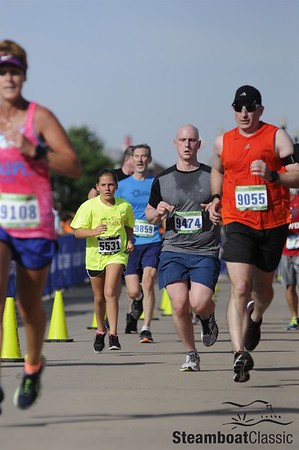 Oh Yeah, success!!! that made two personal victories on the run out.

Ryan was pushing it down the stretch as well although it looks like he ran out of pavement for the final challenge!

Another race, another medal to add to my collection.  Actually it is meant to be a keychain, but I keep it on the trophy wall.

Back to our Race Tradition (having had to forego it at the Marathon), here is our official post race shot.  Yes, folks we remained on the outside of the medical vehicle.

So, the final race time was 1:19:22.  Not my fastest time which is in the 1:15s, but not my slowest.  I probably could have got down into the 18’s but truthfully, I had to retool the body for distance (due to the Marathon) at a cost of speed.  I am still happy with the results knowing Ryan and I made it up and over the hills strong.  Maybe next year I’ll even move up in my age bracket seeing as I will be in the next one (finally back on the low end of the grouping hehehe)

Thanks again to Linda for taking pictures that day.  Always appreciate her getting up at the ass crack of dawn to see me run for like 2 minutes and then sitting around in the sun for me to traverse the course.  I really like this shot she took at the beginning of the race.

Please keep our country safe from socialists and crooked politicians! 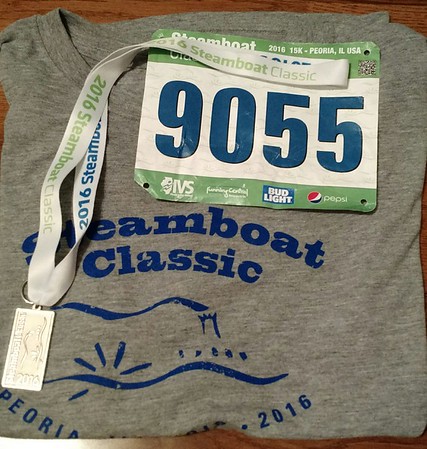 Pretty crappy shirt organizers and your after party is getting weaker every year. Thank god the Bix is up next.

4 thoughts on “Feeling the Steam”