Big day for the Peoria Journal Star’s website.  Apparently everyone I know was looking at their daily news feed based on the number of text messages and emails I got about one of their articles.  Apparently a local liberal arts college (Knox) decided to put all of their collective knowledge together and come up with a list of “creep” designating activities (and I bet they wonder what differentiates them from real colleges).  As expected, clowns are uber high on their list, but there was another reason everyone felt obligated to inform me … they included BIRDING.  Yes, folks, apparently this fine institute (cough) did an in depth study and determined that BIRDERS creep other people out.  Really!?! white guys over 45 (their classification, not mine) with binoculars standing in a meadow or woods creeps people out.  Now if said birder was socializing with everyone in the area.. that might be a bit creepy (hehehe), but birding … come one.  Apparently some survey takers should get out of the house a bit more.  Just imagine how debilitating it must be for someone scared of a birder to have an encounter with a clown – my guess, on the floor shaking in convulsions.

Today, isn’t about making fun of a liberal arts college (although it is fun).  Nope, today’s post is on a topic that has been few and far between – phoadtography!  I’m sure you are shocked.  Let’s start with this shot.

Admittedly, not a shot actually from the road, but was a fun little detour on our way out to Yellowstone back in May 2013.  As you know, Linda is all about the flowing water and Sioux Falls South Dakota had a nice set of rapids running through it.  I on the other hand tend to prefer statues (when no wildlife to hunt).  The Bison above is nice… but I like this next shot better. 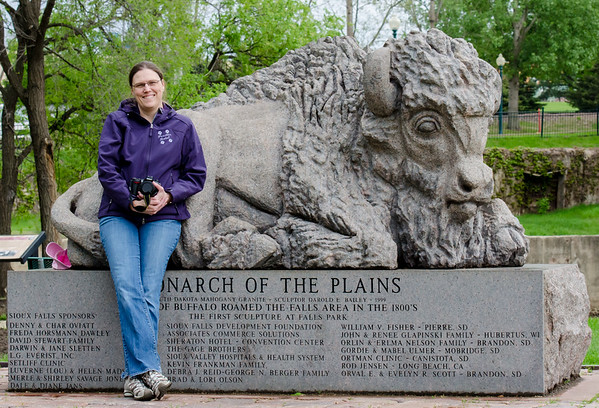 How cute!  (although not sure what the North American Roller Hockey Championships has to do with a Bison.. hehehe.

Hit the jump to see more shots from our trip.

Here is a side view of the statue.  It was actually a uniquely created sculpture – very course up close, but from afar looked a lot smoother.

Now, this next one gave me a good head scratching.  I didn’t remember taking it and I certainly didn’t remember going through Luverne Minnesota on my way out to Yellowstone.  I’ve been known to drink a QT black cherry slushie and drive half way across this great country of ours, so I would never rule out a wrong turn.  Curious, I went and checked out the dates and it was actually taken 30 minutes before the other Bison statue was taken … so DEFINITELY not Minnesota.

This next shot creeped the hell out of me (no, I did not come upon a birder).  We were up in an observation tower that looked out over the falls.  At one point I looked down and shuddered….

Zombie girl getting ready to eat her brother – yikes.  Maybe Knox College can do a study on what statues are likely to give you nightmares.  Now that would be a worthwhile study.  Better move onto something more peaceful.  Note, the next shots were actually taken from the road.

How cute – a whole heard of Bison on LSD.  Oh, and apparently one was eaten by vultures (you might have to look close for that one).   Nothing makes a long drive go by faster than seeing a yellow happy fact on a fence post, especially if it says HI!

Apologies for not getting this next one completely in the frame.  I did get the interesting parts captured.  Thought it was an odd mixture of caricatures and then a pretty realistic top piece.  I honestly thought it was a giant crayon until I got closer.

At least the shot above was in focus.  This next one was framed nicely, but soft as hell.  The sign says “Happily Ever After Starts Here”  Seems very Bates-like.  Vacancy in a roadside motel, a happy catchy sign to  put you at ease.. and then a GIANT ASSED BEAR ready to slam it’s paw down on your head – Let’s keep driving.

If you have never been to Yellowstone, then you are missing some of the prettiest country in America.  If you are lucky enough to catch it in May, you can take in the mountains shedding their winter coats.

Of course, if you are unlucky enough to catch Bear Tooth Pass in May, you can take in a total white out.

That was unbelievable.  We started through the pass and it seemed fine.  Halfway through we were struggling to see the road guide poles.  Once we made it the rest of the way through, we found out they had completely closed the pass just after we headed up.  Reminded of going through a white out on Loveland Pass while traveling out to Beaver Creek many many years ago.  Not sure our friend Sung will ever forget that traumatic event.

Well, that’s all I have for you tonight.  Hope you enjoyed some scenes from the road trip out to Yellowstone.