Today I successfully completed another attempt at a three loop run through Springdale Cemetery.  If you recall, I actually pulled this off for the first time two weeks ago.  Form no-runners, this might not seem like much of an accomplishment, but that course will inflict some serious hurt on your body – there are three major steep hills in the standard loop direction but we take the second loop in reverse which results in two ridiculously long hills that leave you begging for mercy.  It was a big moment to finally face my demons and get it done the first time (let’s just say I’ve tried countless times to get through it, but each time succumbed to the exhaustion).  Today was a commitment to myself to complete two 20 miles runs before attempting another life list item.  With that out of the way, I can focus on making sure all the moving parts are in tip top shape.  Now, the downside of all of this is I’m dead tired at the moment and staying off my stiff legs.  This of course translates to … extra time to get a post out, yeah.

The bonus statue from the Denver Botanical Gardens shoot in the last post reminded me there were a few more landscape shots I had not processed yet.  Yes folks, another non-bird related post – hopefully this will quench the hate mail that has been burning up my inbox as of late hehehe. 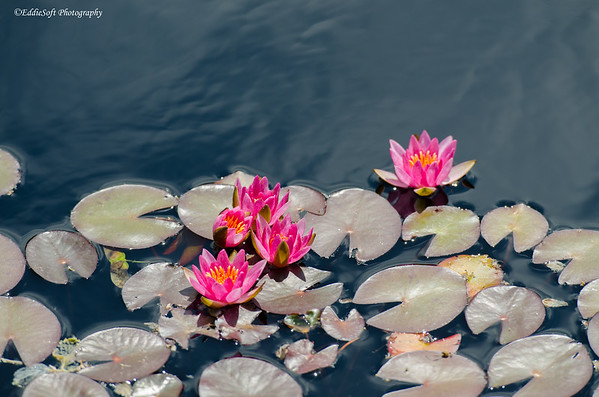 These shots were taken at a small pond in the middle of the gardens.  Unfortunately, we were there in mid-day so we were dealing with some harsh light.  I have two monitors in my den one set a little darker and the other set a little lighter than Linda’s Mac.  I should probably sync this up since we print off of the Mac screen settings.  The two settings allow me to quickly see if I want to lighten or darken a shot without having to make physical changes.

The vibrant water lilies on the dark toned water caught my eye while I was taking shots of sculptures scattered about the area.  The tripod would have been handy for this shot, but that was left in the car on this outing.  That would have allowed me to smooth out the water with a longer shutter speed.  Oh well, you go with the conditions you have available.  The ripples do give a sense of motion to the scene.

In another area of the pond I spotted some white flowers and thought it would be a good complement to the pink flowers.  Now that these are worked up I’ll probably try putting these to paper (after tweaking them on the Mac so they match our printer service color shading).

It has been a while since I’ve featured a flower shoot on this blog – that is really in Linda’s wheelhouse.   Hey, that reminds me – I have Biltmore flower garden shots still to process!

Have a good one everyone – I’m going to go foam roll my legs.