Welcome to December everyone.  At times it has felt this year has flown by and other times it seemed a painful crawl as we dealt with disheartening events.  Regardless, time marches on and with the new month comes the last required quota for the year.  Linda and I had a few extra days off for the Thanksgiving holiday giving me the chance to process some of our outings from earlier in the year.  Without further delay, here is a sampling of shots from the Goose Lake shoot up by Hebron, IL.

Unlike most of my bird posts over this year, this particular one does not contain any +1’s.  Not that there wasn’t any that day, I just covered those previously – specifically the Black Tern (link here) which ended up in the top 10 list checks for 2015.  With the focus on new birds you may get the impression that we are one in done in the field which is far from the truth.  In fact, it is sometimes amazing how many unique birds we end up stuffing in the tin by the time the sun falls into slumber. The shot above are of Sandhills that flew over the lake. 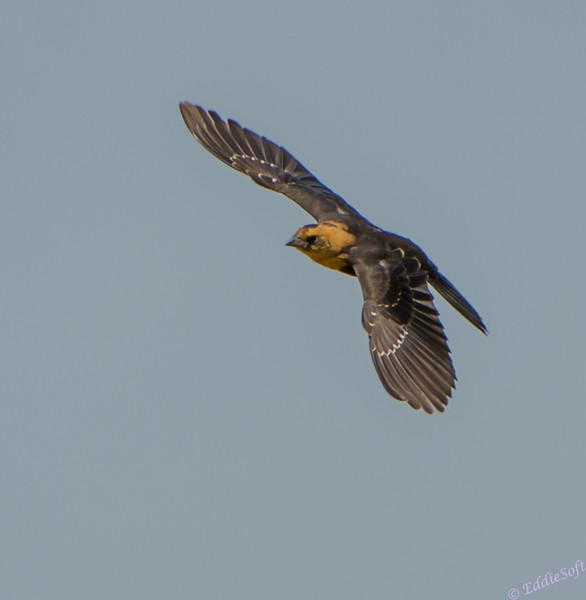 The bird above and below is the Yellow-Headed Blackbird.  We had to travel all the way to South Dakota to get them checked off our list the first time (link here).  If only we knew they’d only be 3 or so hours away.  The females (lighter heads) were pretty flighty and wouldn’t land long enough for me to get a crispy shot, but the Beast was able to pull off some decent flight shots.

Hit the jump to read more from Hebron

The shot below is one of my favorite being that she looks like a missile.  Not often do I see (must less photograph) a bird in flight with wings retracted.

There were male Yellow-Heads there, but much more sparse.  The one below caught me off guard as about a dozen took flight right at me from a wheat field – they were tucked down in the stalks and saw me long before I was ready.  Did manage to get the Beast up and on point to catch this straggler.

There is a grass trail at the farthest end of Goose Lake that takes you through the prairie grass out to a small tangle where this Common Yellowthroat was hanging out.  Funny how I really saw them for the first time last year and now they seem to be everywhere.  Very distinct birds – at least on the male front.

Unfortunately, a branch got in the way of the next shot.  I left it in the set because of the cute pose.  It also gives a good view of the long pink legs/talons this species possesses.  Would have printed it if that damn branch hadn’t decided to photobomb the shots – rumor has it Linda purposely pushed that distraction into the shot when I wasn’t looking.

Unlike the males, the females and juvi Yellowthroats are not as distinct.  The one below was originally ID’d as a female, but my brother took a look and believes it is likely a juvi – based on some followups I believe he is right.

When it comes to regal looking birds, the Cedar Waxwing is always near the top of that list.  They are very distinctive and their coloring always give them that serious and stoic appearance.  We have had the luxury of seeing them around our house lately as their flocking up for the Winter and enjoying the late Fall berries.

This particular Waxwing was keeping a close eye on me at Goose Lake.  It was spotted while trekking back to the car.  It cost me about a pint of blood to get these shots thanks to a horde of vampire mosquitoes.  Those nasty suckers  were inflicting punishment on the day walkers crazy enough to traverse the bike path without a gallon of DEET lathered over them.  IT was awful, just ask Ron or Linda.  But yet, I suffer for my craft hehehe.

The Wren below was tucked way back in the trees and refused to come into the light.  The Beast is an F4, but it still thirsts for any brightness it can coax out of the darkness.  The pre-processed shot was as black as the branches below.  Thanks to Lightroom and some extra work in Photoshop, the Wren was pulled out enough to make it out.  I have not taken the time to ID it yet (beyond the species), but pretty sure it is a common House Wren.

Unlike Independence Grove in Libertyville (stay tuned), there were not a lot of Goldfinches.  I could hear them, but couldn’t locate them.  One did eventually pop up for a few seconds allowing me to get a few shots.  This one ended up being the best of the lot, but again, the Grove shots were much better efforts.  Those Finches are really pretty birds. There were also a few Tree Swallows that were hanging out in a dead tree by the side of the trail.  Ron was able to get a Green Heron hanging out in this tree, but it was gone by the time we made our way there.  As with the Yellowthroat, there was some interference from nature that precluded it from making the print grade.  It was left it in due to the nice symmetry and curious pose. 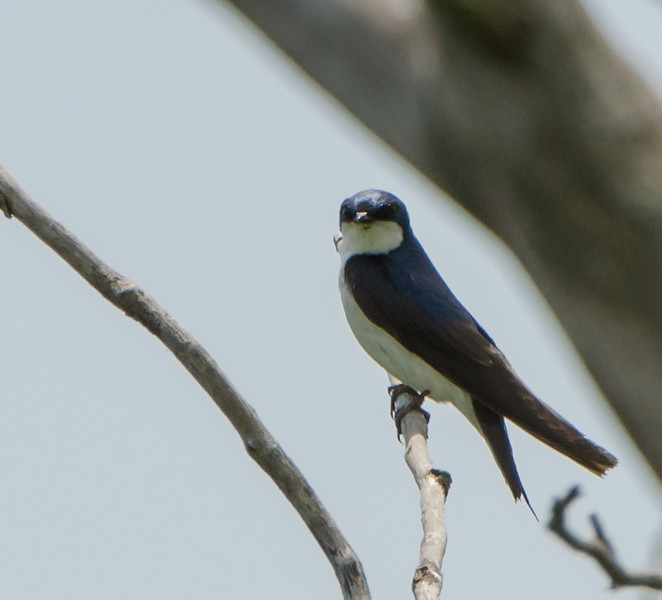 Next up the ummm well, ummm let’s go with Little Brown Jobber for now.  I can’t tell you how many Sparrows I have processed this weekend but it is easily over 200.  There is a sense of dread when in the digital darkroom with this species knowing how many hours it is going to take to properly ID them.

Rather than wait, I just added them into the set.  Feel free to provide your opinions – always welcome here at Life Intrigued especially when it comes to ID assistance. 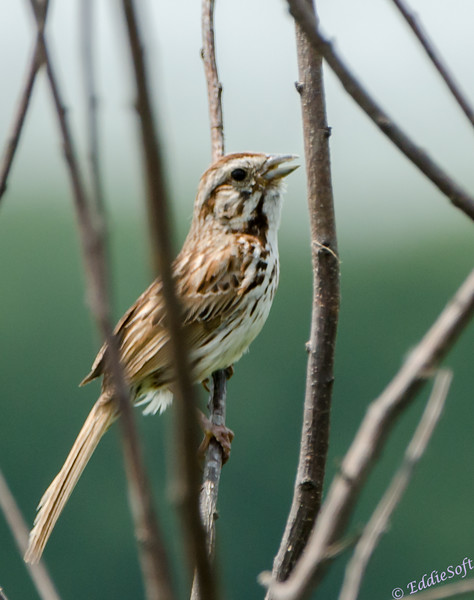 Probably the best angle for ID’ing purposes since it shows the head and breast streaking which are critical for discerning differences among the variety of Sparrows.

The next set of shots are not that great from a photography perspective, but it was a a joy to witness in the field.  I was able to watch an incredible aerial battle between Red-Winged Blackbirds and a hunting Red-Tail Hawk.  Blackbirds generally have a bad disposition anyway, but these specimens were totally pissed the predator was taking aim at their home.  At first it looked like someone was flying a kite with a long tail the way they gracefully chased down the Hawk – tracking every maneuver. 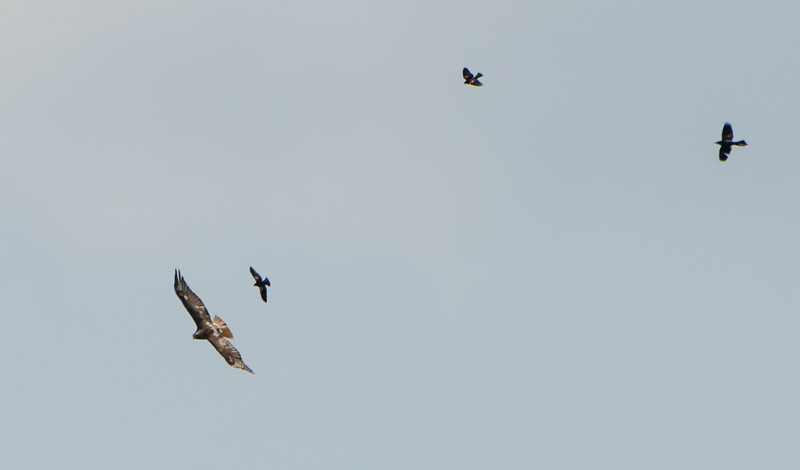 Eventually one put on the thrusters and landed on the back with a mighty peck.

The back was screaming from the rig by this time so opted to just sit and watch how this played out.  Those Blackbirds did not respect the killing potential of the Hawk and continued to take shots at the tail feathers until the predator opted to look for softer targets.  Unfortunately, that brought it into the stomping grounds of the Black Tern which wings down have superiority over anything else flying over that lake.  It was obvious that Hawk wanted nothing to do with those Terns and gave up on the area flying off out of sight.

What do you think of my watercoloring of a Dickcissle.  Remember, one fuzzy shot is a mistake – an entire collection of them is a STYLE!

Of course, birds are not the only subjects for our glass.  There were Tiger frogs all over the place jumping all around me like hyper grasshoppers.  These spastic frogs are quite the leapers making it nearly impossible to get a steady shot.  The following image was the best from the lot – would have been better if Linda hadn’t thrown all the grass into my shot.  Some people will do anything to sabotage fair competition. 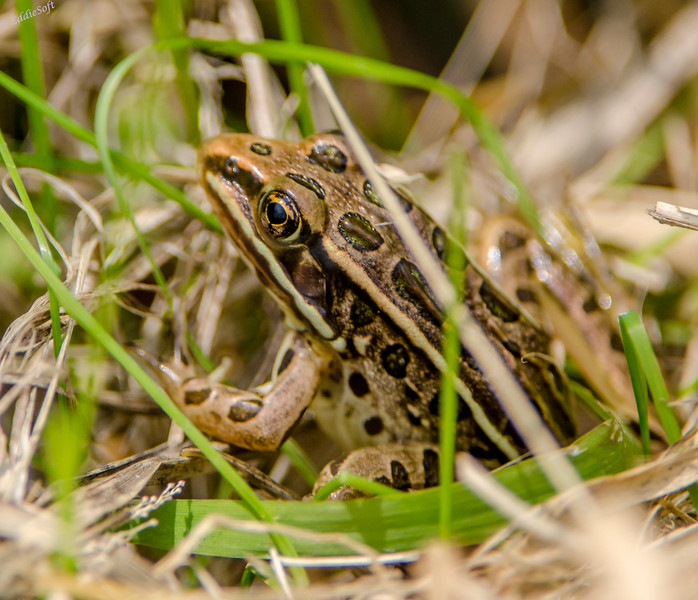 That’s all I have from the Goose Lake shoot.  Only thirty more locations to get through. Next up .. Libertyville!  Have a good one everyone.