This has to be a new record over the last year or two – not one, not two but three non-birding posts in a row.  Basically, I am just buttering you up because you are about to get hit with another wave of birding posts.  Just trying to quell the growing pile of hate mail from all the non-birders out there.   I am an equal opportunity time waster.  Having just completed my second half marathon distance training run in 4 days, figure it would be appropriate to get a running related post out.  So today I bring you the results of the Bix 7 race – you know, that annual race in Davenport, IA that goes for a paltry 7 miles (unless you take that right turn at the top and go for the 2 mile alternative)

…. and this is how I felt afterwards!

As bad as that looks it is still not INSIDE the ambulance.  Actually we were just goofing around, I didn’t feel that bad at the end but it was harder on me than expected.  Unlike the last couple of years, the weather gods were not helping out as much.  Sure missed those colder starts from the previous years, but still not as bad as it has been – being at the end of July, you can start tipping the mercury in the mid-80’s at the start only to spiral down into a sticky mess half way through the race.

Hit the jump to see how the race turned out!

I screwed up the starting corral this year somehow ending up in the Yellow classification instead of the usual Orange area.  This equates to having to navigate through a much larger crowd up the Brady hill – this will be corrected for next year.  Once again, my friends Sung and Ryan were toeing the starting line with me. Sung’s kids even participated in the kid’s version the night before.  Although they liked their medals, something tells me they might not being doing that next year.  They looked pretty tired after their first competitive run.

Here’s our traditional pre-race shot.  Apparently Linda’s camera phone couldn’t handle the bright green I was wearing that day and muted it compared to the shot above.  This was a change up for me since race days are usually my orange days.  I wanted to dress appropriately for my new pair of running shoes.

I haven’t broken down yet and purchased the Marathon Photo shots since they have basically priced themselves out of my interest, so no finishing shots.  My personal photographer participated in the Quick Bix with her friends.  What we do have is the post party shots!

We used to run for the Twinkies but ever since Walmart took over the post party we’ve been cheated out of them in favor of crappy Zingers!  That is a HUGE disappointment for me and damn near brings out a side of Linda you do not want to see … ever!  Luckily they still have Whitey’s Popsicles which are straight from heaven after a race.  Root beer is my go to flavor for two reasons – a) they taste great of course and b) they do not tend to stain your tongue.  So, even after two helpings I still wasn’t embarrassed to open my mouth.  Now, contrast that with Sung and Ryan that had at least three helpings each (confirming my previous comment that they are awesome).  They opted for a combination of cherry and grape which means their tongues looked like they’d eaten a hundred Spree candies.  Somehow we missed getting that on print- it was quite funny.

Of course, we took our turn in front of the Whitey’s truck.  Looks like all my training this year is adding a few inches of height.  Getting those ligaments all stretched out on those loooong training runs. 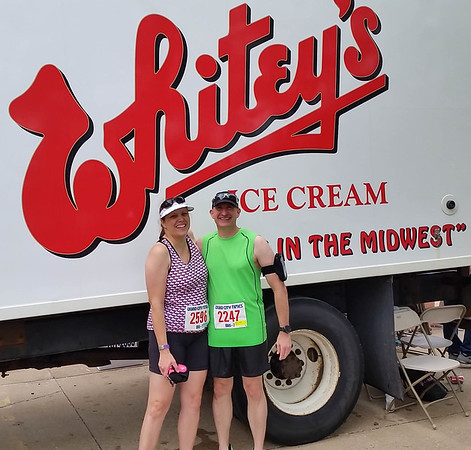 I can’t believe Linda was cheating like that.  Very unbecoming but we will let that slide being how proud I was of her once again defeating the nasty Brady hill.

From a race perspective, I didn’t exactly execute as planned.  I wanted to go out a little faster than previous years and then try to hang on to those gains through the rest of the race.  Being back so much further this year translated to extra energy into fighting through the initial crowd up Brady.  This extra emphasis resulted in an 8:06 first mile which is smoking through the carnage of people who do not belong that close to the starting line.  It occurred to me at the first split that the volume on my phone was off which means I could not hear my splits.  This cost me since I didn’t know when to pull back.  Evident by the unbelievable 7:21 second mile.  Ryan even commented on that pace afterwards and smartly pulled back.  Finishing up the down hill and most of the second hill with a 7:49 for the 3rd mile- still too fast.   Brought it back to reality with two 8:27s for 4 and 5 but all that early speed cost me big time on mile 6 clocking in a crappy 9:09.  Trust me, I was dying on that mile and was hoping Ryan would come by and pick me up.  He managed to pass me without either of us knowing – for the non-runners out there, when you are fatigued in a race you tend to get tunnel vision to the point you are literally just trying to cover the ground a yard or two in front of your feet.  I brought it back to an 8:06 on the last mile to give me an overall 8:14 pace.  Nice seeing as how the goal was and 8:15 but hate to waste awesome early splits.  Next year the volume on my phone will be checked before the start.

Chip Finish Time was 57:54  (a little off my previous bests but with retooling to the longer distances this year I’ll take it)

Congrats to Ryan who posted a nice 56:23 chip time and Sung who battled through and posted a nice personal run as well – we all showed Bix where he could stick his supposedly tough course thanks in part to a long year of training.  I should probably point out some 60 people had to get some form of medical treatment that day (to put things in perspective).  Even the Jackpot Rabbit ended up dropping within sight of the finish line.  At first they simply said he didn’t finish, then they claimed he quit which struck all of us runners as odd seeing as there was over $3,000 on the line.  We eventually heard he actually dropped from heat exhaustion having gone out too fast (be careful out there boys and girls).

Another year in the books and another year of getting my picture taken from the outside of one of these.

This is why I train and train and train.  I think the first picture may become my traditional post race pose – kudos to Linda and the guys for getting me to do that.  We won’t talk about the giant wet spot I ended up leaving on the cement – hehehe

2 thoughts on “Another Bix7 in the Books”